Banana Kong by FDG Games will have you on control of a Gorilla as you run, jump, bounce and swing on vines to outrun a huge banana avalanche! It won’t be easy to overcome all obstacles, but you have the help of many animal friends.

Banana Kong is a runner platformer where you take control of a Gorilla running away from a huge banana avalanche. To control your primate, you tap the screen anywhere to jump, and if you keep your finger pressed, he’ll take a sort of parachute leaf to glide. Your objective is collect all the bananas you can, while avoiding all the dangers in the level. There are some obstacles such as barrels and spider webs, that you can destroy, but they slow you down. Once you crash into a hard obstacle or fall in a pit, you lose your life. 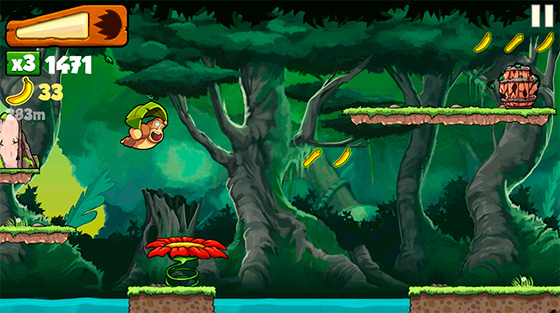 You can also come down from platforms with a slide down motion, and there’s big turbo tackle attack you can perform by doing a slide left to right. You need to fill your “banana meter” at the top left corner of the screen first, but this tackle can destroy obstacles, and increases your speed once it finishes. And by using it, you can also reach new areas in the game, such as caves, the beach, go on top of trees and a underwater section. To aid you in your quest, there are animals you can ride, such as a boar, that runs fast and can destroy rocks, a toucan that let’s you fly around, a snake in the beach that can slide on tree vines, and a turtle that makes the aquatic levels so much easier. There are also animals that serve another purpose, such as the giraffe, that saves you from falling from the top of a tree one time only, and a cheetah that gives you a 500 meters boost at the start of the level. As you progress through the game, the scrolling will be faster and you’ll need to react much quicker to the obstacle, but you’ll also find more valuable items, like a rainbow banana worth 30, treasure boxes, and a magnet that makes it easier to collect kong’s favorite fruit.

Banana Kong features a great 2D hand-drawn art style. The animals look pretty colorful and are very expressive, with a funny cartoon look that makes them seem “alive”. The items and objects you interact with such as spring flowers, trees vines and such, look bright and stand out from the background so you can distinguish them with no problem even when going at high speed. 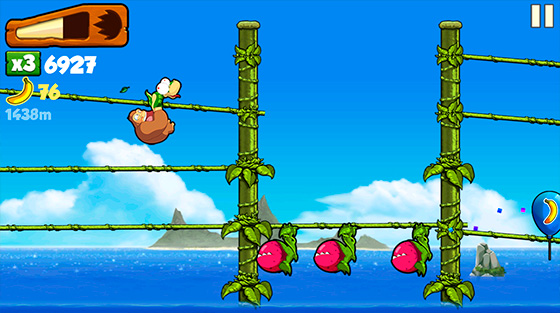 You start out at the jungle, but there are other places to visit with different obstacles to overcome, such as the caves with lava pits and giant rocks, the beach with carnivore plants, and the submarine section that has a crocodile trying to eat you. All scenes look pretty good, and really give the variety an infinite runner needs so you’ll keep playing. Everything looks so good that you’d at least want to play one more time just to see if you find a new entrance to a different scene.

Banana Kong featured an endless level, but it changes everytime you play. You may start just collecting bananas the first 100 meters in one playthrough, and the next time you’ll have to avoid barrels, jump on flowers and glide to make it to the next platform, and then leap over ponds with alligators trying to eat you. Since it’s random and you’ll never know that next, you have to trust your reflexes and quick fingers. 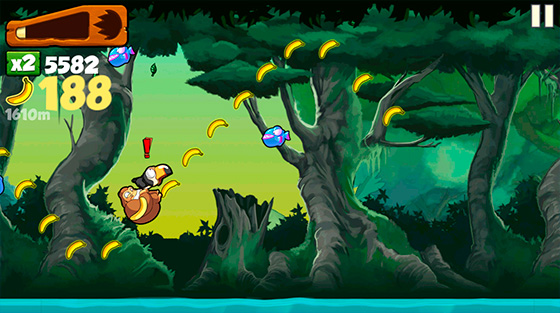 With the bananas you collect, you can buy power ups and animals friends at the in game store, and ever hats and costumes to dress up your gorilla. And for more replay value, the are Achievements to unlock, which are challenges to overcome everytime you play, such as “Jump Over 5 Flowers”, “Tackle 3 Obstackles” or “Survive 500 meters”. Simple Bonus Missions, but give the game something extra than just breaking the previous distance record.

Banana Kong if free on both Google Play and the App Store. You can buy the Ad Free version plus 1,000 bananas for just $0.99, and given the game’s quality, it’s a reasonable buy if you’re a fan of the genre, but it should be said that there’s premium content in the game’s store, and buying every costume once you got the No-Ads version, it’s not exactly cheap.

If you enjoy a good infinite runner, definetely download Banana Kong. Its variety of animals, power ups, and places to visit keeps things fresh, and you’ll be playing just to discover what else does the game has to offer in it’s random levels. Check it out. Pros Cons