Lead Duck Travolta, Ducky Parton and Quackson Five through through a Disco Puzzle Adventure. Use colorful combos, gather groovy powerups and build your Mojo to defeat wicked villains as you connect, dance and explore!

Disco Ducks is a traditional Match-3 Puzzle game where you have colorful figures in a grid and you must line up 3 or more by dragging them one space up, down, left or right. If a match is made, they’ll switch places and the lined up figures of the same color will disappear; if not, they’ll return to their original spaces. If there are not possible matches to be made, all the regular figures will shuffle and change places. 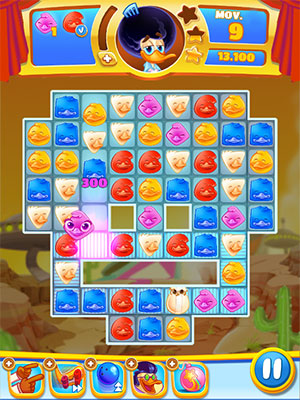 If you make a vertical or horizontal line with 4 figures, you get a special egg bomb that when used in a match explodes taking out a whole row or column. If you line up 5 figures in a way that there’s a 3-match in a row and a column sharing one of the figures in a corner, you get an X-Egg that explodes diagonally; or you can get a double bomb if the match was in a “T” shape, this one explodes one time taking out the surrounding figures, and after new ones come to the grid, it explodes again, potentially it can take out 16 figures. You can also switch eggs between them to trigger special effects, like if you combine a vertical or horizontal bomb with a double bomb egg, you get an explosion that affects 3 rows or columns. If you manage to match 5 figures in the same line, you get a disco ball, which doesn’t need to be matched, just switch it with a figure and it’ll take out all the ones with that color. If you ever switch 2 disco balls between them, there will be a special super effect that makes all the regular figures disappear. The objective of the game is to collect the figures shown in the upper left corner before ou run out of turns. Besides the colored ducklings, there may be musical notes, which can be switched, or audio speakers that don’t move,and you make them disappear by making matches next to them. There are also golden plates on certain spaces, collect them by making matches on them. In some levels there are enemies to defeat. There’s a pig that nails wood boards on a space in each passing turn. By making a match next to it, you make it dizzy, so it doesn’t cover up a space in the next round, and after a few hits you take it out. There’s also a frog that shoots a bubble that traps ducklings, and most of the time you need to collect bubbles by making matches with it. You can move them, but in each round, they go up one space, so it’s hard to predict what to do. If you make a match next to the frog, it’ll shoot a bubble directly to your item counter, so it’s a good way to collect lots. Finally there are boss fights, which take damage from a specific colored duckling, speakers or music notes. The fox can take out figures from the grid every 3 turns. The turtle can hide in its shell so it doesn’t take damage that turn. And the alien has a laser that turns ducklings into music notes every 3 turns, so it’s hard to have enough figures ready for a match. You defeat the bosses when the life bar gets down to 0% Besides the special figures you make, your disco duck friends can help you in different ways. In the bottom of the screen there are boosters you can use. One takes out a whole row or column, another lets you choose a single space to affect, one gives you 5 extra turns, another one let’s you switch 2 figures anywhere on the grid, and there’s a bomb that works like a disco ball.

Disco Ducks features excellent 2D hand-drawn animation with great looking effects for explosions and a 3D disco ball that shows up with colorful light flashes when you win. 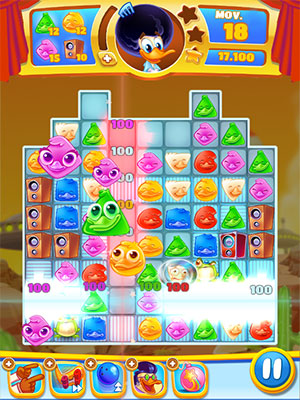 The ducklings are bouncy and you can see them with different expressions when they get trapped in ice, a bubble, or get collected after a match. You’ll see how they get big and go to the item counter above. If you manage to make many matches with a single move, creating a “cascade” with the falling ducks, you’ll get big text in the screen like “Funky”, “Tight” or “Boogie” Your duck character with afro hair is on top of the screen, and he reacts to your moves. He usually has a “chilled” expression, but you can see him get happy when you make a big match, and he gets worried looking at the “moves” counter when you’re almost out. You see him and his friends when you win or use boosters, and they all look great and are perfectly animated. When you win a level, depending on your Star Ranking you get one, two or 4 ducklings with the Disco Ducks gang dancing at the beat of the colored ducklings song. You also get to see them all in the game’s title screen.

Disco Ducks is loaded with content and has the level of quality of the best and most popular match-3 puzzles. There are many different types of levels, and every few stages you get a new feature that changes the way you play. Lots of unique challenges await you. 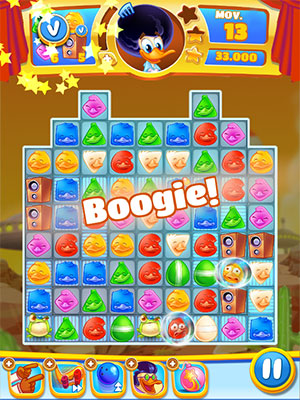 Besides the main mode where you must complete the stages in the world map, there’s a tournament you can enter by collecting Bronze, Silver and Gold passes in the World Map levels, and the daily challenges. You can collect presents that appear at random when you play, so you can win golden coins to buy items and extra turns, and there’s also a special duckling with a power up, that fills a “Dance Bar” for your duck character. When you fill it, he can get into the dance floor and make lots of figures disappear. The core puzzle gameplay it’s simple to use, but is just doesn’t seem to get boring since the level design is awesome, and each stage offers a unique challenge that feels so much different than the last one, so you’ll have a hard time putting down this game.

Value for your Money 91%

Disco Ducks is free on Google Play and the Apple App Store. You won’t see banner advertising, but if you lose all lives, you can choose to watch a video commercial to gain one life; but you can only do that one time each hour, and then you’ll have to ask your friends to send you one, wait several minutes, or buy more lives. Every section in the world map has a locked gate where you need 3 keys. You can unlock it by playing levels, but only one level every 4 hours, or you can pay to unlock it. While levels get quite hard, is possible to win without spending real money, but you’ll sure have to wait a lot if you run out of lives or get to the locked gate, and while you do get boosters just by playing, there few and far between.

Disco Ducks is a great option for casual or hardcore puzzle fans. While the gameplay mechanic is the same of many games, there are tons of special features so you’ll always see something new even after playing 100 levels. All stages feel pretty original, there are lots of items, boosters, special figures and just so much content so discover and use. The music and graphics are awesome, and it’s just one of the best games available now. Download it today. Pros Cons