The objective of Pixel Dodgers is to survive as long as you can in a 3×3 grid. You start out in the middle, and blue energy blasts start coming at you from 4 directions. Swipe your finger left, right, up or down to avoid them. You can stay in any space for as long as you want, but some levels have traps… 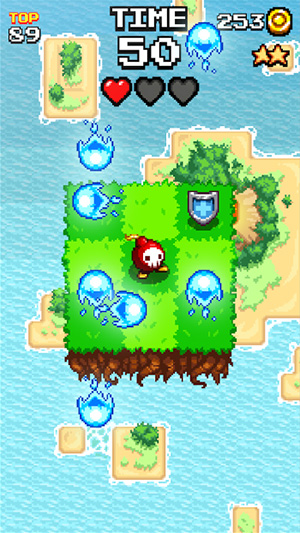 You have 3 hearts in the top of the screen, that’s your life. Get hit 3 times, and Game Over. But from time to time, a new heart can appear in the grid, collect it to replenish health. Other items like coins will appear, so you can buy new characters or level up your abilities. There are also power ups like the shield, that protects you from harm for a few seconds. The are also power downs that you have to avoid, like a yellow thunder icon that makes the blue balls go faster, or a poisonous mushroom that makes them bigger, thus harder to avoid. If you survive long enough, like a minute in the first level, you’ll unlock level 2. Play there for 90 seconds, and you’ll unlock level 3 and so on… There are many characters to get and you can improve them so their shield lasts longer or they move around faster.

As the name says, Pixel Dodgers features a colorful 16-Bit visual art style, it looks like a game from a mid 90’s console. The animation  is good, with the characters always moving around, and while you only see the blue balls and some items, they all have little sparkles or something so they’re not completely static. 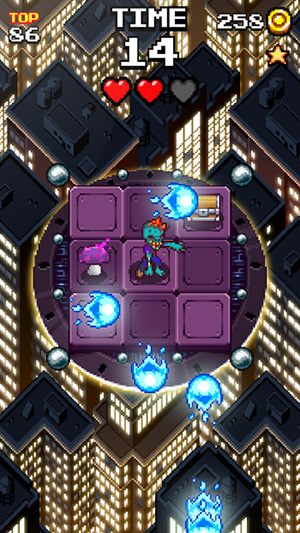 The backgrounds look great, and you can see many light and glowing effects. There’s a lot of variety in the stages, going from a forest, beach, desert, tech alien ship and so on. There’s plenty of attention to detail and as far as pixel art go, this is a great example of how it should be. Retro game fans will enjoy the visual experience if offers.

Pixel Dodgers don’t have much to do besides avoiding blue blasts for as long as you can; but it’s fun trying to get a new record to see the new character or stage. You can even play as a zombie o a Terminator wannabe, the T-799. 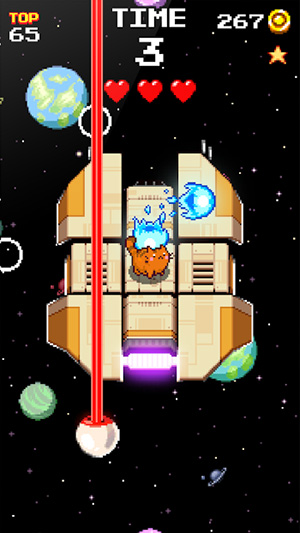 If you enjoy pet games or watching cat videos, or maybe use the Pusheen sticker on Facebook often, you can even play as a feline character. The game also has halloween theme stuff to see, and it has catchy chiptune music. Gameplay wise, it may not entertain you for much longer after you’ve reached 90 seconds or so… But for people that enjoy the thrill of avoiding Street Fighter energy blasts on Top View, it’s worth downloading.

Pixel Dodgers is free on Google Play and the Apple App Store. You’ll see an ad when you lose, but that’s to be expected. You can buy coins with real money to unlock characters, since it may take forever just by playing; but it’s not necessary to enjoy the whole experience.

Pixel Dodgers is different than your average infinite runner or hopper, here you swipe your finger to slide to the sides and avoid Hadokens. It’s fun at first, and the great graphics help in keeping you entertained, but after you survive a couple of minutes, the average player will probably look for something else. If you enjoy this kind of games, check it out, you may end up unlocking every character. Pros Cons