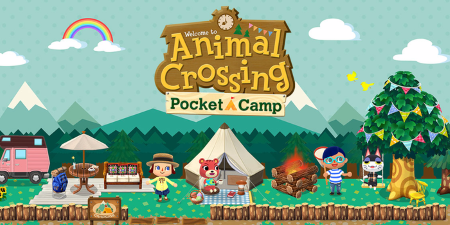 We are playing the highly-anticipated game before it’s officially released worldwide. Here’s what we think.

To start, I’ve been an Animal Crossing fan ever since I spent pretty much everyday of my teenage years playing Animal Crossing: Wild World on the Nintendo DS. I was hesitant that Nintendo would drop the ball when they announced the mobile addition to the franchise, worried we would get some kind of furniture designer app. But at the same time, if there has ever been a console franchise that seems perfect for mobile and in-app purchases, it’s Animal Crossing. So when I got the chance to try it out after it was announced, I was excited, but still a little hesitant. Now, I’ve played Animal Crossing: Pocket Camp, and wow.. it’s blown my expectations out of the water. This is a true Animal Crossing title, just in mobile form.

Let’s begin with the technical details. Shockingly, Pocket Camp plays butter-smooth on my low-end Android phone. This is a cheap phone with an outdated OS that can’t even run Grand Theft Auto. The game takes up little space (340~ MB) compared to most games, and looks GORGEOUS. Honestly, this is the best looking game I’ve ever tried on my phone. Even more shocking, this is the best looking Animal Crossing game. Ever. Plus for me, it runs smoother than Super Mario Run, go figure. It instantly takes me back to my DS days, but the graphics are much better, and feel like they were ripped from New Leaf. So far I’m in love. The graphics are smooth, crisp, and bright. It looks much better on a phone too. 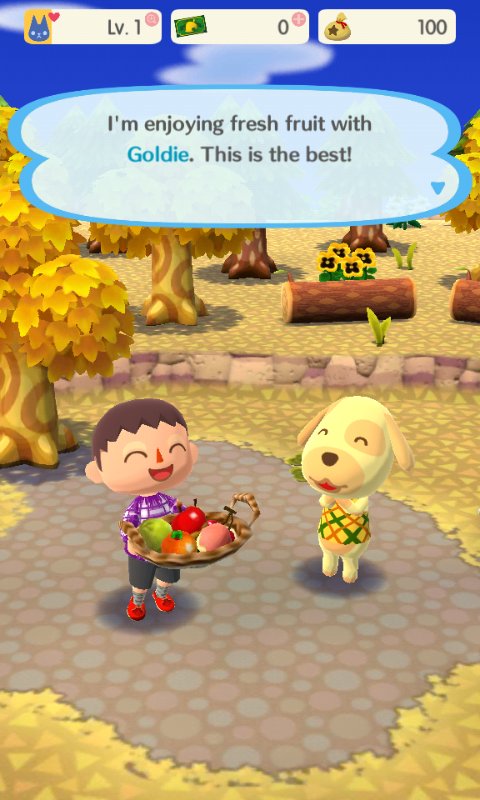 The control scheme works fantastic, just tap and drag. It’s responsive, picking up apples and talking to characters was great, no freezing or lag. Basically you earn materials (cotton, steal, etc) when completing “requests” that you can use to craft furniture and other items. Example requests would be bringing 3 apples, 3 peaches, etc to a character (the word villager feels out of place, there is no village). It’s a simpler yet more replayable version of the “can you find me..” moments when talking to villagers in mainstream Animal Crossing titles.

You create your character in the beginning, choosing from the many usual Animal Crossing hairstyles, eyes, etc. Then you answer a couple questions which chooses the “theme” of the campsite and who you’ll end up with visiting first. Since I went with Natural, I got Goldie and the Natural theme. You can change your answers, since it shows you ahead of time what your campsite will look like and who you’ll get character-wise. 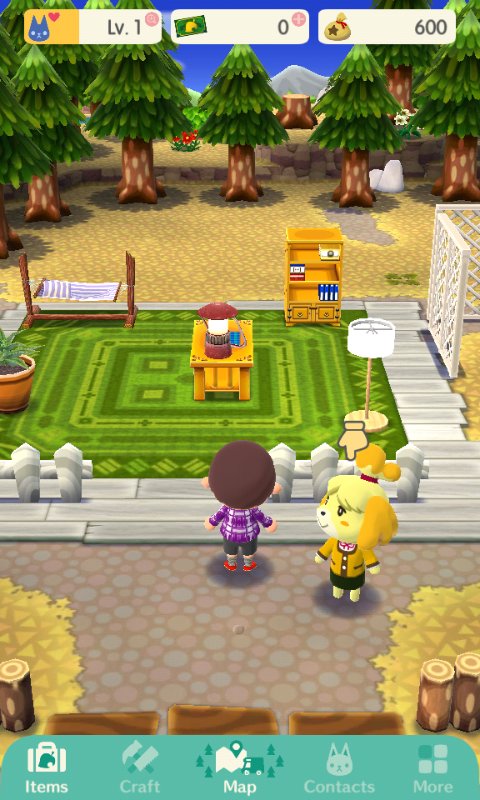 Anyone telling you Pocket Camp can’t be played like a regular Animal Crossing console game is wrong. Yes the game differs in some forms, but it’s a welcome change for a portable platform that is always with you (your phone or tablet). Collect fruit. Talk to animals. Collect shells. Fish. These are things you can still do, stress-free. You don’t need to complete every request from an animal. And basically if you think about it, they are no different from the console titles when villagers would nag you to find a fossil, or their favorite color furniture of the week. You can still collect fruit, sell them (for instant Bells or to other players), buy furniture without crafting it, decorate your space, and do almost everything you can do in a mainstream title. It’s just done in mobile form.

As for in-app purchases, there is nothing really worth paying for. Sure, maybe you’ll want to add some Leaf Tickets. But remember, this game is FREE. So if you spend $10 on Leaf Tickets for the life of the game on your phone, that is less than the cost of admission when buying the game for a console. Is the game different, yes. But in a good way. The game also sports the best graphics in the series, even on low-end devices. I can’t wait to see what updates bring. Everyone has their own opinion, but overall I’m happy with the game, especially since I was worried we’d have another Furniture Designer game on our hands.

All in all I’m excited. I can’t wait to play more. It’s addictive, but doesn’t require your attention all day either. Not unless you want it to. For now, I’m enjoying the heck out of it! It’s definitely eye-candy too (and filled with nostalgia). We’ll have more content on Animal Crossing: Pocket Camp in the coming months. Stay tuned!