A mysterious tower has risen! It emits plumes of noxious green smoke from its summit making people sick. Strange creatures infest the tower but if nobody tries to ascend it we will all be doomed! Are you that hero…?

Tower Fortress is a 2D Action Platformer where you control a space marine that enters a high eerie bulding filled with monsters, and your objective is to go to the top floor by jumping over platforms, shooting enemies, defeating level bosses and reaching the teleport capsule at the end of each level. 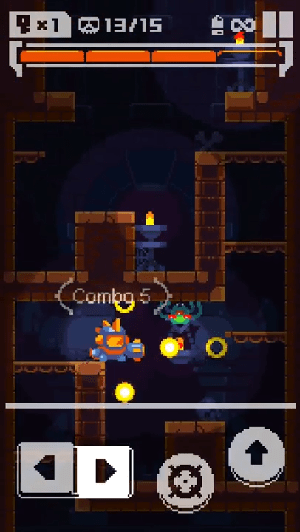 On the bottom of the screen are the virtual buttons to move your character. The controls are like a classic 8-Bit sidescroller, you have left and right arrows to walk to the sides, an action button to shoot, and an up arrow to jump. And just like Mega Man X, you can the ability to slide on walls and jump on them. This way you can reach the upper floors way faster. Also, when you jump, you can perform Metroid’s “ScrewAttack” by tapping on he up arrow again, which is a mid-air jump while spinning really fast, and when you hit an enemy with this attack and poking it with your armor’s spikes, you can destroy them. The monsters you encounter can be mutant spiders, bats, aliens with guns and much more. You start out with a regular single shot weapon with infinite ammo, but you can pick up new weapons along the way, like a laser, a shotgun, a flamethrower, a machinegun, a T-Gun that shoots forward, up and down at the same time, and a powerfull bubblegun that has short reach, but can quickly take down enemies. In the levels you can collect coins to buy new suits with special abilities, like higher firerate, higher jumps, or affect the gravity making you fall slower while in the air. In the top of the screen you can see your life bar, which starts with 4 hearts, and you can pick up health items left by some enemies. There’s a suit that has 5 life bars, and you can also upgrade it for all suits as you play. When you lose, you have to start over from the first floor, but the levels are made at random, and each playthriugh feels slighly different.

Tower Fortress features 2D Pixel Art graphics, and it seems to try to look like a 16-Bits MetroidVania title. The animation is well done, and the characters look round, kiddy and cute, but the overall atmosphere of the levels is a little dark, like Super Metroid on SNES. 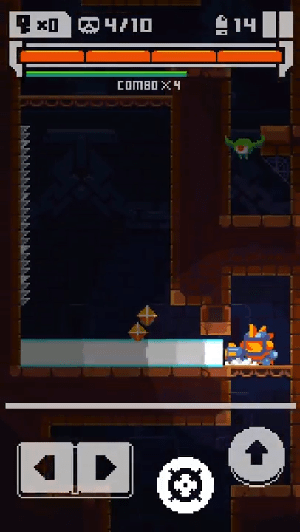 Like classic dungeon crawlers and exploration titles, most of the screen is dark, but there’s a light surrounding the character, that becomes dim as it expands.You can also see this effect in light sources such as torches in the backgrounds. The backgrounds aren’t particularly detailed, and they may look kind of blocky, but there are enough elements so you don’t feel like you’re playing the same floor a hundred times. Enemies explode leaving the game’s currency and there are many fancy effects when you shoot and jump, like dust on the walls when you slide, or coming up from the floor when you shoot a powerful weapon. Bosses are huge and have many moving elements. Overall, while it isn’t a bright colorful platformer like retro 2D console titles, this game is very appealing to watch.

Tower Fortress may have been better as a platformer with established levels instead of an endless title. There are 4 different enviroments to see, and some elements get rearranged, but when you start a playthrough, everything seems to be the same, which can discourage you to start over after a few tries. 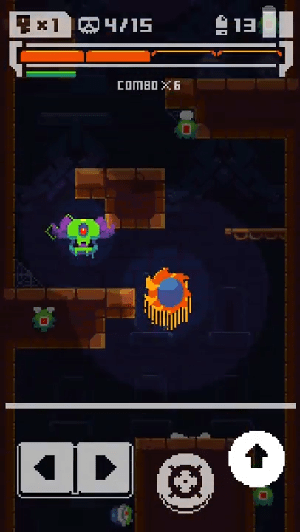 There are many weapons to use, suits to unlock and abilities to upgrade, and since the gameplay is smooth and the animation is good, you’re sure to be entertained for a while, the problem is that there are no checkpoints and only people that like speedruns or really enjoy this “going up, up, up” mechanic would want to play for longer periods.

Tower Fortress is free on Google Play and the Apple App Store. It cointains ads, but nothing really gameplay intrusive, and you can buy the game’s currency with real money through in-app transactions, but it won’t be necessary to upgrade at a decent pace. Considering the PC version of this game is worth $4.99, this is a high value game you can play for free on your mobile device.

Tower Fortress is a fun endless platformer inspired by classic 2D titles. It features cute pixel art graphics with smooth animation and levels get randomised every time you play; with tons of unlockables and upgrades, it can be a pretty entertaining title if you don’t mind the beginning of each play to feel pretty much the same. After beating the 4 area bosses, you may leave it at that and don’t feel like continuing exploring the upper floors, but while you get to that point, you’ll have an enjoyable experience. Pros Cons