Barrel Tap Boom is about a Treasure Hunter: Tux the Penguin, who blasts itself out of cannon-barrels to collect gems and other treasures in a magic forest. Time your shots just right and get that Golden Gem.

Barrel Tap Boom is a game based around timing. Here you take control of a “Bullet Penguin” that’s inside Cannon-Barrels, when you tap on the screen, the penguin gets shot. Think on the classic SNES Donkey Kong Country barrel levels. In the game you can collect blue and red gems to increase your score, but the objective of each level is to get the Golden Gem. 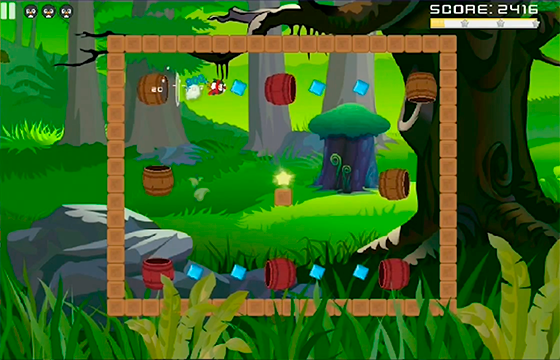 The barrels can be static, moving up and down, or left to right, and even roating. If you shoot yourself to a wall or a bee enemy, you lose a life. You can continue a couple of times, and if you fail, you have to restart the whole level, and you lose the collected gems. Besides the regular “tap barrel”, there’s a red barrel that automatically shoots as soon as you get in there. They totate every 2 seconds, so be sure to time your arrival to them just right. There are also spring trampolines where you can bounce to reach new places. Finally there’s a special “Pac-Man” barrel, that has a unique feature, if you get shot from it and reach the end of the right screen, you’ll appear in the left part of the screen, the same happens if you reach the bottom, you’ll appear in the same position at the top pf the screen, just like it happens in the classic Pac-Man arcade. Some levels don’t have a Golden Gem and require you to collect all gems, there are also bonus levels filled with gems and Pac-Man barrels, and as special features, there are some “rooms” locked that open when you collect a golden key in the level, and there are some “dark” levels, that ligh up when you enter a shining barrel. Overall, Barrel Tap Boom is just a casual arcade game with simple gameplay based around timing shots, but there’s so much variety in the levels that you’ll want to play for longer than the typical casual title.

Barrel Tap Boom features 2D animation. It looks OK, but not particularly fancy or anything. 32-Bit games in the 90’s had much more in the art department going on. Here, you’ll see the quality you expect from a “good” title, but not an excellent one. 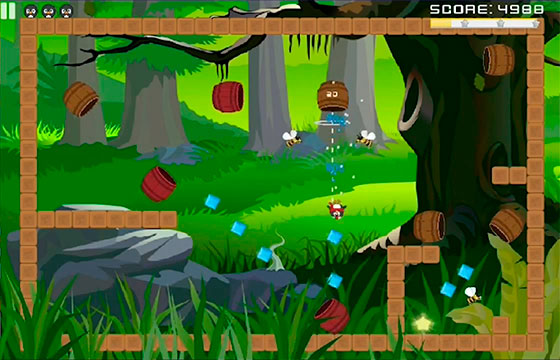 The forest in the background looks nice, but there blocks and barrels and other elements where you play, may seem a little to simple. The penguin also doesn’t have much animation, it’s just the same drawing rotating, and doesn’t look vary good when it zooms in and shows the spinning when it collects the golden gem. There are a few blast effects, and shinning added to items, and when you die and the penguin soul goes to heaven is a really nice detail, but nothing the visual experience here is not comparable with big studios, still, a very good effort for just an indie developer.

There are many mobile games based around the “time your shots” concept, where you can tap anywhere on the screen to shoot balls, squares or some other figure, like Boom Dots, but they don’t have anything more than shapes on a plain background. Barrel Tap Boom has a character in a forest setting, with missions to accomplish, and levels that are designed very different to one another. There are many features to keep things fresh. 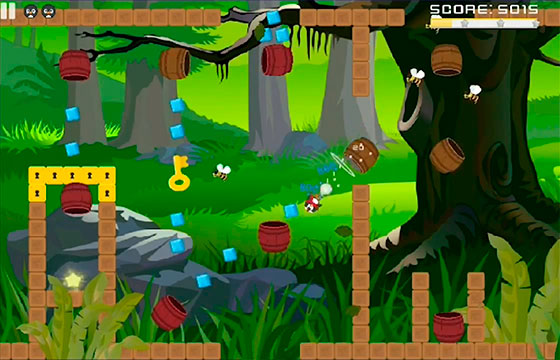 It’s also worth mentioning that the ambient music is nice, but the winning song sounds great. When you complete a level, there’s a celebration with confetti going on, and you get to see your “Star Rating” depending on how fast you finish, and how many points you got. So there’s some replay value for each level.

Barrel Tap Boom is Free on Google Play and the App Store. You won’t see any annoying ads and the game doesn’t tell you to buy lives or anything like that. You get 3 chances per level, and it’s possible to enjoy and finish all levels just like that. So check it out it you’re looking for a casual “Tap Timing” game.

Boom Dots is a simple Arcade style single-tap reaction game with addictive gameplay that will test your reflexes in the same way High Score Coin-Ops worked back in the day. Most people will be fine just getting 50 points and leaving it at that, but there are 200 missions to complete if you get hooked. Pros Cons