Ghosts’n Goblins Mobile is a port of the classic dark fantasy game from 1985 where the knight Sir Arthur must rescue his beloved Princess Prin-Prin from the evil Demon King and the army of hell. 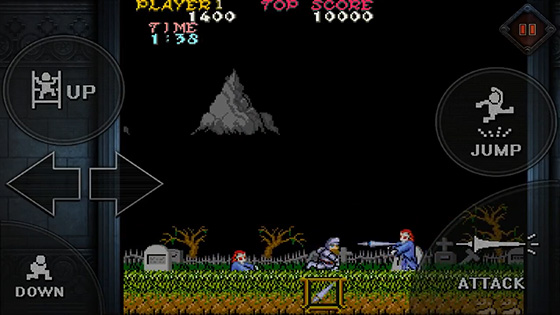 The gameplay is that of a traditional 8-Bit sidescroller platformer. You advance from left to right eliminating enemies and jumping over obstacles until you reach the end of the level and defeat the stage boss. Instead of a common virtual joystick, on the left side of the screen you have big left and right arrows to walk around, a large circle to climb ladders over it, and an icon to crouch in the lower left corner. The lower right corner of the screen is the area to touch for attacking, and you’ll shoot lances, and above is the circle to jump. You start out with an armor and shooting lances, as you advance you can collect new weapons such as the knife, which is smaller and faster, the fire torch that burns for a few seconds when it hits the ground, and a shield, which is very quick and can block enemies projectiles, but has very low range. The way you take damage is a distinct aspect of this game, when you take a hit, sir Arthur will lose his armor and walk around wearing boxers, if you get hit again, you’ll lose your life and end up as a skeleton on the ground. When that happens, you’ll start your next life at the latest checkpoint you reached.

Ghosts’n Goblins Mobile features classic 2D pixel art art as it was the standard when it came out to the arcades. For a game that is over 30 years old, it looks pretty good, but for today’s standard the game elements are repetitive, the animation too simple and overall it looks way too dark. 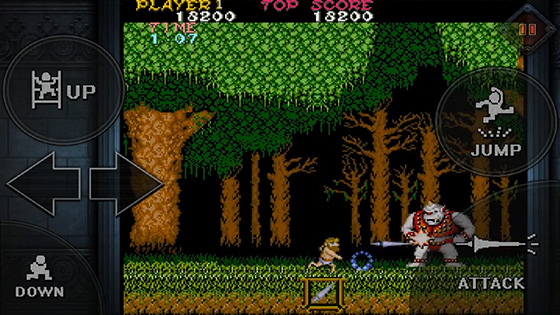 You’re seeing mostly a black background most of the time, and the layers of platforms have patterns that repeat themselves too soon, making the game seem lacking of variety. Again, this was what every arcade game as doing in the mid-80’s, but for a modern player it would not be very appealing to the eyes.

For the most part, Ghosts’n Goblins Mobile is a perfect port of the original arcade game that you can play on the go. It has customizable controls and a new “Casual” difficulty making it accesible for new players, but doesn’t come with anything else noteworthy. 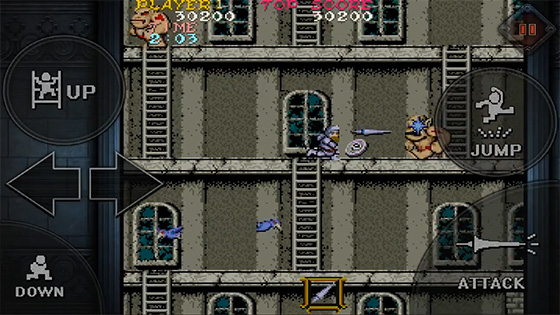 This was a very hard game to play with physical controls in the arcade cabinet and console versions of the era, and the fact that it isn’t compatible with bluetooth controles for Android is a common complain. There are leaderboards and some achievements, but Capcom could’ve offered new challenged or re-arranged levels like they did with Mega Man Legacy.

Ghosts’n Goblin Mobile is available for $1.99 on Google Play and the Apple App Store. Given the lack of content, it may seem expensive, but if you’re a fan of the original game and used to spend dozens of quarters on it, then it’s a reasonable price.

Ghosts’n Goblin Mobile could’ve been a better version of the game with new content, brighter display options, challenges and being able to use physical controls. In the state that it is now, and the asking price, it can only be recommended for those who played it at the arcades and want to have it on their phone or tablet; casual gamers may think twice before making the purchase. Pros Cons