A groundbreaking, uber-popular game upon its arcade debut in 1987, Double Dragon is the undisputed godfather of co-op beat ’em all!

Double Dragon Trilogy has the 3 games of the arcade series that made the beat ’em up genre popular with the first entry in 1987. It’s all about punching and kicking your way through dozens of enemies until you reach the end boss, defeat him, and keep going until you encounter the leader of the Black Warriors gang. 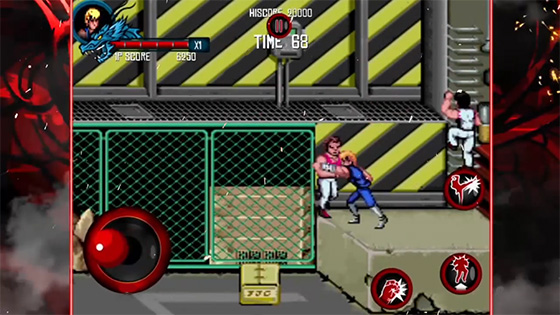 In the bottom left part of the screen there’s the 8-way joystick, that you use to move around. You can walk left, right and go to the front or back of the stage. On the right side there are the action buttons for punch, jump and kick. You can jump and perform a flying kick, and with some combinations you can do different attacks, like if you tap forward twice, you perform a headbutt. If you attack an enemy one or two times, you leave him dizzy, and open for a finishing move. If you press punch, you’ll do a heavy upper cut, with kick you’ll perform a spinning roundhouse kick, or you can get close to grab your opponent and hit him with knees, and finish by throwing him in the air. You can also pick up weapons like baseball bats or whips, and you use them to attack with the punch button. There are also projectile weapons like knives, barrels and boxes that you can only throw around. There are ven explosives that blow up after 5 seconds, and their damage is capable of taking out your whole life. You have an energy bar, and as you take damage, it gets lower until you die, and then come back with another life. You start with 3 lives, and when you lose them all, you can choose to continue from the beginning of that mission. In the Start Screen, you choose which game to play, and then select Arcade Mode, the whole game from the beginning, or Story Mode, where  you can pick in which mission to start playing.

Double Dragon may have nice graphics for an Arcade title back in the late 80’s, but nowadays they don’t good that good. The visuals here haven’t aged as well as more advanced pixel art Coin-Op series like Metal Slug or Neo-Geo games in general. 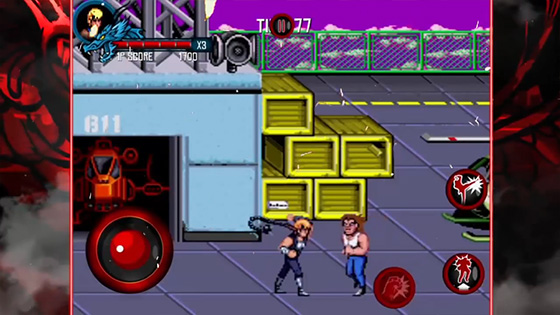 In the first game, the characters look like comic book characters, but the animation is choppy, and overall the movement is slow. Double Dragon II has faster gameplay, but still the characters seem to need more frames of animation. In the third game, they went for a more realistic look, but the overall speed of the game became slower, and when you walk around, it looks weird since you seem to pop up many frames in from, instead of making a smooth transition. The backgrounds in the first two games  are static, and they aren’t very detailed, but they get the job done, nothing really to complain about, but they don’t stand out so much. In Double Dragon III they look better, a little dark for a more serious tone and you see some flashing lights and some moving elements.

You get 3 classic games for way less than you use to spend at the arcades back in the day, and you can play anywhere any time; but that’s about it, you won’t see much improvements or extra content over the original titles. 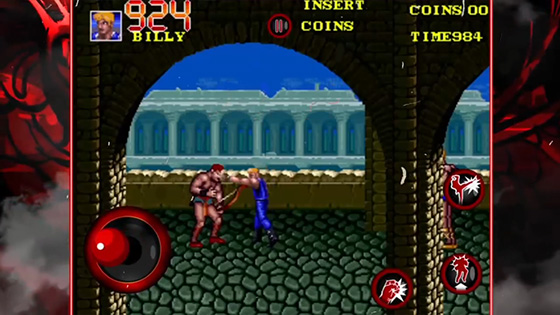 You can customize your controls, being able to move around the joystick and buttons where you feel more comfortable playing; and there’s also a difficulty setting called “Mobile”, since the original arcade challenge may be too hard to play on a touch device. The thing is, in easy mode you only get one enemy at the time, and dies after just 2 blows, and that is boring.

Double Dragon Trilogy is worth $3.49 on both Google Play and the Apple App Store. If you’ve played them on arcades with the intention of beating them, you probably spent over 5 dollars in just one of them; so for a classic game fan, the price is totally worth it.

Double Dragon Trilogy may feel dated for today’s standard, and it’s not really recommendable for casual players, or those players that aren’t very fond of the Beat ’em Up Genre. But retro gamers and fan of old school brawlers, have a great option to clean up the streets from bad guys in this classic package. Pros Cons