Chicken Fly! by Baad Games Studio is a funny cartoon style runner platformer that will test your skills and reflex! It has random generated levels and lots of power ups and items to use so you can escape from the chef lady trying to make you dinner.

Chicken Fly! is your average runner platformer. You take control of a farm bird that’s about to be eaten, and your objective is to escape from the country mad woman and her kid trying to capture you. You tap anywhere on the screen to jump, tap again for a mid-air jump, and if you keep touching the screen, the chicken will glide. As you level up, you will gain a turbo boost ability, and when you fill an energy bar, you can press a button in the right part of the screen for a quick dash. 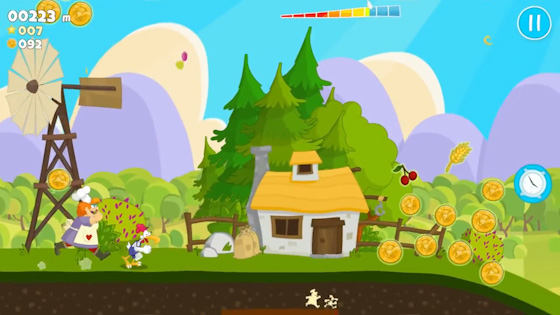 In the levels you collect golden coins that you use to upgrade your abilities or buy costumes for your chicken. You can also collect stars to level up, so you become able to use certain power ups, such as Magnet that attracts item, the Golden Egg that has a treasure inside, Speed Sneakers to gain more speed and so on. By level 5, the chicken can eat apples and other fruits to fill the energy bar, which can also be used to fly for a while. You lose when you get caught by the mad woman, and there are many obstacles that slow you down, like getting stuck on mud, or tripping on a rake and getting hit in the face (remember Sideshow Bob on the Simpsons?), and there are bear traps that completely inmobilize you, so game over. When you lose, you can continue if you have an extra life, or chose to go back to the main menu. You’ll see how many coins you collected and see how much experience the stars you got give you. You’ll also see your current record and how many meters you needed to break it.

Chicken Fly features an average 2D cartoon style art, but it doesn’t have much going on for it in the animation department. It’s one of those games where the characters only have a pivot point on the shoulders and hips, so they doen’t move their elbows or knees. It looks stiff, and ugly-ish. 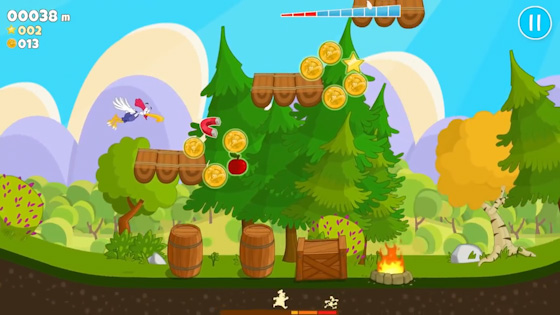 The backgrounds look OK. and are random generated, but always seem to be well tought challenging levels. Items are highlighted and have a nice animation when you collect them, the obstacles don’t stand out that much, and some, like the giant scorpion, are kinda hidden so you have a hard time noticing it. Overall, the visual presentation is not great, but certainly not plain mediocre. It’s more on the good looking side, but the characters could have been better animated. Similar games like Banana Kong feature more animals, who are better animated, and more varied and colorful backgrounds.

Chicken Fly! features everything you’d come to expect from an Infinite Runner game, but offers a little more extra stuff to keep you playing. It has Extra Missions to complete in the main game, such as “Perform 20 Jumps”, “Run 100 Meters”, “Avoid 5 Bear Traps” and stuff like that. It adds a little more excitement to the play, and it helps you level up faster. 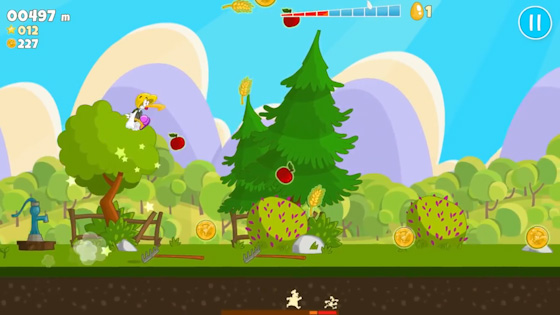 In the game’s shop you can buy costumes to spice things up a bit. Wigs, Hats, Shirts and Shows to make your chicken a little more fashion. Using different shows doesn’t affect the speed or jumping distance, it would have been a good idea to be able to jump higher with Basketball Sneakers on.

Chicken Fly! is free on Google Play and the Apple App Store, but if you want to level up faster and really last for a while when you play, you’ll have to buy in-game coins with real money, and 2,000 coins for $1.99 may be a little too much for most people, specially considering that just the first upgrade of the Turbo Boost costs that.

Chicken Fly! is an OK choice if you’re into Infinite Runner games, but don’t come expecting something great or different from anything else you’ve tried before. It is a little above average in overall quality and content, but not by muh, so only recommended for fans of the genre. Pros Cons