NEOGEO’s legendary golf game is back, in a brand-new mobile version with touch controls! Competing as one of six international golfers on different courses worldwide, players choose their club, analyze the wind direction, and find the best path to finishing each hole in as few shots as possible.

Neo Turf Masters came out back in 1996 for the Neo-Geo, and this port features a few re-done graphics and touch friendly gameplay, but overall is basically the same experience as the one found in Big Tournament Golf, as it was known in Japan. 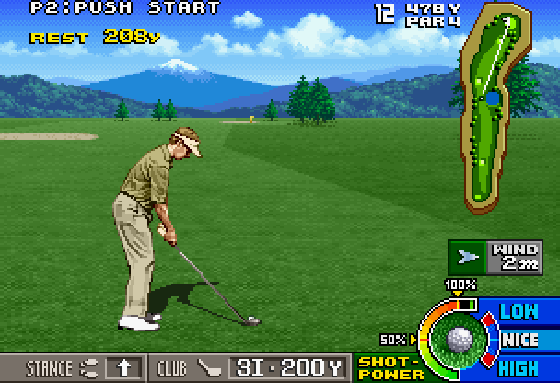 At first you select a course and go play a stroke tournament of 18 holes. When you get to the first one and start playing, in the top right of the screen you’ll see an overview of the field you’re on, and an arrow telling you the overall trajectory of the ball. This doesn’t take into account the wind, which is shown below the field overview, if the hole is on lower or higher terrain, or obstacles such as trees that may be in front of you. You can move left or right by touching the screen, change the hitting club by pressing its icon in the bottom of the screen, and decide if you want to try a curveball by tapping the sides of the golf ball. Once you choose the direction, press the bottom right corner of the screen so a bar starts filling a power meter, which will decide the distance of your shot. Tap it to set the percentage of strenght when it’s close to 100% to get you max club distance, which you can see next to the club icon. After selecting the power, the altitude bar on the right will start moving up and down. Tap it in the middle if you want a fair shot, or go a little highter or lower if you want to go for a different altitude. Just don’t tap it when the blue bar gets on the red zone, if you do that you’ll miss the shot. If your ball lands in fairway, your shot will be pretty much the same as the first one; but if you land on rough, deep rough, sand or another difficult place, your shot pretty much won’t have as much power as you select when setting it, so you have to aim a little higher than what you like. When you arrive to the green, the screen will change to the putter view, then you just have to move to the sides and when you’re ready to shoot, you just need to select the power of the shot, which will be meassured by a long strenght bar of 100 feet, and will highlight the distance where the hole is. Sometimes you’ll have to make up for the terrain by adding one or two more squares of power if the hole has 2 feet of altitude, or a little less power if you will shot from a couple of feets up. Also, when you’re on a little boulder, the ball trajectoy may change a little to one side, so you must aim accordingly. Once you get the ball in the hole, you’ll get points depending if you got a Par, Birdie, Bogey or whatever and move on to the next stage. Between playing holes you can see how you doing in the whole tournament, and decide to move on or get out to start over. Besides the stroke tournament, there are 2 Player matches where you play to see which one is better on each hole, and the one that gets the ball in with less shots wins that particular hole.

Neo Turf Masters looked great at the Arcades when it was first released over 20 years ago. For this title, they went for a more realistic look, instead of a cartoony, comic book or anime style used in Neo-Geo games at the time. By today’s standard, it doesn’t hold up as well as Metal Slug and other SNK classics, but it’s still quite pleasant to look at. 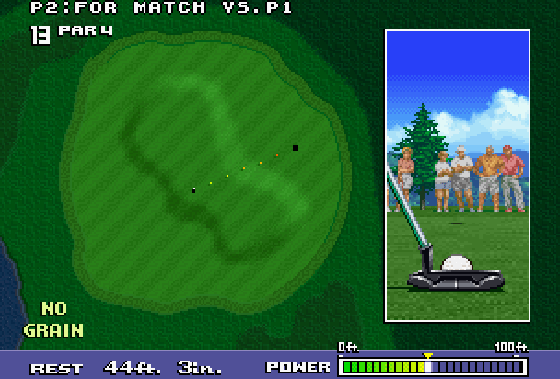 It is a little difficult to really know where the ball will land, and on the green, you can tell if the hole is up or down because the graphics do tell you about the terrain, but it is much better to calculate the right shot power and distance in a 3D game. The golf courses look nice, maybe a little low res compared to new 2D titles, but you can make out all the elements, and the characters are nicely designed. They don’t move around much, but you can see their expressions when they accomplish a Birdie and get happy or get really mad if they make a Double Bogey and want to break their golf club. Some menu interface was redone with HD graphics for this port, and it looks way better than on the original game. It would’ve been nice if the game had completely re-master graphics, but overall, it seems that only really picky users would complain about it.

Neo Turf Masters features 4 golf courses of 18 holes from around the world. Each one has a particular setting and places to see, and you can notice that the design can be pretty varied, with sand traps, lakes, rivers, narrow fields, different terrain and many more elements so that your way to the green isn’t an easy task. 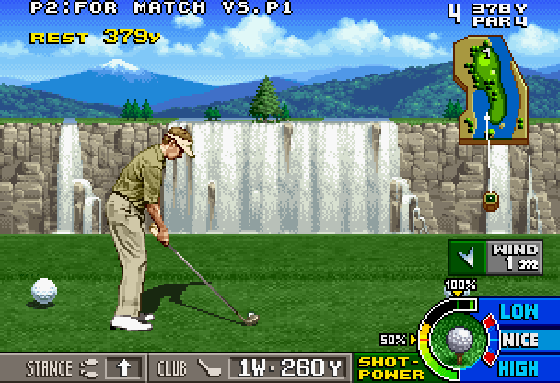 DotEmu added a new touch interface, a few achievements and some other elements for the modern mobile user, but overall this title is a perfect port of the original Neo-Geo Arcade; of course, this time you pay for the whole game, and don’t have to drop a quarter everytime you make a bogey. They could have added much more new content for those that already enjoyed it back in the day and wanted an improvement or extra stuff, but as it is, the asking price is reasonable.

Neo Turf Masters is available for $2.99 in both Google Play and the Apple App Store. If you enjoy golf and want to try your skills in all the 72 holes, it’s totally worth the price. You would spend a lot more playing it at the arcade back in the mid 90’s.

Neo Turf Masters is a must buy for retro gamers that enjoyed it when it first came out and want it on the go, with a few remastered visuals and touch gameplay elements. Casual players may not be so willing to purchase it, unless they really enjoy golf titles, and even they may want a 3D one instead. Consider it on sale if you’re not really sure. Pros Cons