Big Action Mega Fight plays just like the typical Beat ’em Up. You start off in a stage, and are unable to move from that screen until you get rid of the thugs appearing. Then the camera scrolls a little, you get to the right border and can’t advance anymore, enemies appear, you eliminate them, you repeat the process a third time and keep going until you beat the level. 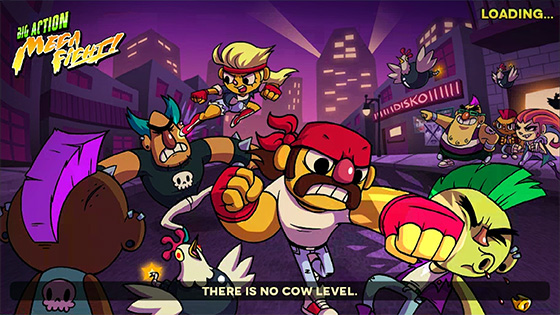 To attack, you have your basic One-Two Punch, an Uppercut, and you fill up a ‘Special Bar’ to pull off a Super Move, like the ‘Fistnado’ where you basically become The Tasmanian Devil, or the Orbital Punch, that send an opponent flying high up in the air, landing about 5-10 seconds after the impact. You can also perform a roll as evasive maneuver, and can also grab enemies and items to throw them behind you. Levels are really short compared to console games of the same kind, but there are many stages per section. You have a World Map with neighborhoods you must clean up from mawhawked thugs, chubby punks, asian kamen rider wannabes, big bald bad guys, kickboxing chicks and explosive chickens. After each level, you earn points that can be exchanged for attributes like a bigger Energy Bar, faster regenerating Special Bar, or become stronger to inflict more damage. You can also learn Special Attacks and improve the Power Ups you can get in the stages, such as ‘the fire punch’ that gives you twice the power while it lasts.

The style of this game is just like a Saturday morning cartoon. Characters look colorful, bright and crisp, with smooth animation and you see special effects when fighting, such as hit sparks, fire, explosions, electric shocks and more. 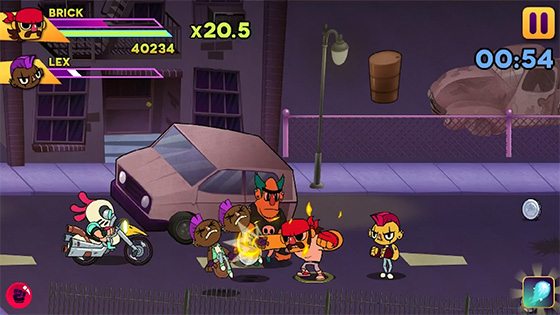 The backgrounds look like they belong to an animated series. They are pretty detailed and there are some added features like tree leaves flying around in the Park Stage, and the Laboratory Level has creatures moving inside capsules and monitors going on and off. Also, the game’s cinematics, while not completely motion pictures, have a nice design and voice acting, so they don’t look stale like the static cutscenes found in 90’s Beat ’em Ups. Everything from the menus, energy bars, world maps, icons and cutscene are really taken care of. The game has a consistent visual style that doesn’t try to copy any other brawler out there. It has a pretty distinctive look that feels nice to look at.

BAMF was developed from the ground up with tablets in mind, that’s why the gameplay is just excellent a mobile device. There are many shortcuts on screen for Special Attacks, hitting enemies is just as easy as tapping them, and all the motions you do work just fine, you never feel like the character is not doing what you want. 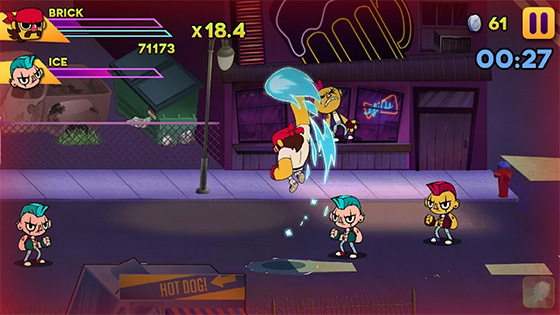 While BAMF does have a lot of content,  the gameplay gets repetitive after a while. It’s really not meant to be played from beginning to end in one go, but more like a pick-up-and-play app, where you take out your device, beat a level, and then put it down to play the next one later. Even in 20 years ago there where more complex Brawlers with more characters to choose from, and more moves; also Boss battles, ability to use weapons, ride vehicles, perform many throws and the like… If you’re a Beat ’em Up fan, you’ll notice how it feels a little too simple and levels just repeat itself after a while, but for a game of this genre thought out for casual players on a mobile device, it’s perfect.

Big Action Mega Fight has many features to discover and stuff to unlock. For its price, $3.99, is one of the best Action/Adventure games you can get on Mobile. There are some brawlers with even more content, like Fist Puncher, but they’re also more expensive. Since it’s a paid app, leveling up your character takes just the right amount of time, and it feels just like an Digital title worth $5 or more on download only stores like Nintendo eShop, Xbox Live and such.

Big Action Mega Fight is recommended for casual players that want a good Action/Fighting game on mobile devices. Its short levels and excellent controls make it a great game in short bursts, but it’s not recommened for long playthroughs since it may get a little boring after about half an hour. Pros Cons