Shooty Skies by Mighty Games is a shoot ’em up inspired by arcade classics where you jump on a biplane and shoot at wacky cartoony characters flying around. Pack on your guns and take on the giant videogame systems and electronics with a face in this crazy 3D blocky SHMUP.

Shooty Skies is a shoot ’em up based on classic arcade games such as Capcom’s ‘1942’ and Neo-Geo’s ‘Aero Fighters’. Here you take control of a pilot bear on a biplane firing at wacky enemies such as fast food trucks, videogame consoles, giant candy bars with a face, and mad robots that look like electronic appliances. 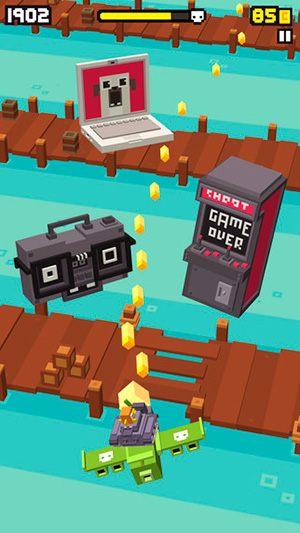 The plane starts out in the middle lower part of the screen, and it shoots automatically, you only control its position by placing your finger on the screen and dragging it where you want it to be. The objective of each play is to survive as long as possible, and to do so, you must dodge every attack from enemies, and, as the genre suggest, shoot them all. You start out with a MachineGun, but can get new weapons like a multidirectional shot or missles. To buy them, you use coins that you collect by beating enemies and taking items they left, or can get new weapons and characters through in-game transactions with real money. If oyu survive long enough, there’s gonna be a Boss Battle, and they can take a lot of damage. You’ll see they have an energy bar you’ll have to deplete completely. Once you beat it, the scenery will change and you’ll continue the endless playthrough against normal enemies until the next Boss characters comes up.

Shooty Skies features blocky 3D cartoon graphics similar to minecraft. They have no textures, but even if models are made up of just squares, they look quite good, every detail like the googles on the bear, eyes and teeth are there, and every element in the level is colorful with great animation. 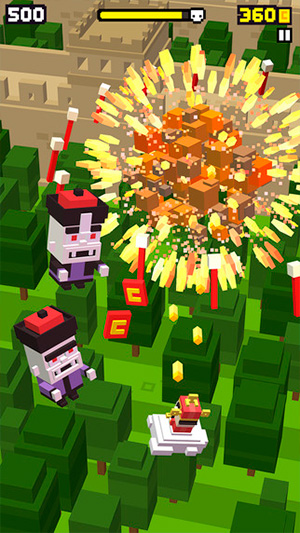 Explosions are a bunch of bright squares of many sizes expanding at high speed, and look awesome. Also, the bullets, items and enemies squash and stretch with a bouncy cartoony look, that makes for a unique visual style not found in many games. But it should be said that when there’s a lot of action going on, you can just get lost and not even find yourself in the mess of squares flying around. Recently blocky 3D graphics started getting popular in Mobile games, but Shooty Skies is a good example of how to pull them of well, and give it a distintive look that doesn’t really try to copy (maybe just get inspired by) similar looking games.

Shooty Skies features many characters to unlock, weapons to buy, enemies to destroy and bosses to have epic battles with, and it’s sure to keep you coming back to break your previous record for a while, but it should be said that it won’t keep you playing for that long if you’re a harcore SHMUP fan. 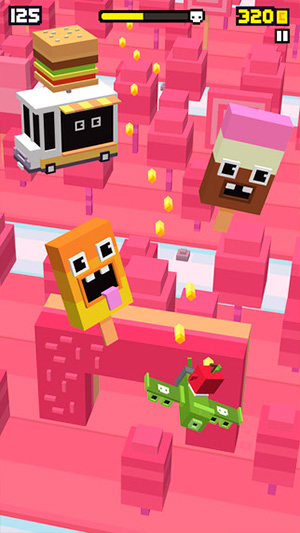 As a mobile title, it’s a good casual game, but compared to classic arcade shooters, it lacks in some aspects. Being an endless level may work for some people, but being able to finish a level when you beat the boss, die, and then continue in level 2, would have been a good idea. Also, there are a few weapons to choose from, and all planes play exactly the same, so it lacks variety in the way you play the games. Finally, an “attack all enemies on the screen” bomb or special attack would been great, and that’s been around since Capcom’s 1943 back in the 80’s.

Value for your Money 75%

Shooty Skies is free to download play in the App Store. You’ll see advertising everytime you lose, and also there are in-app transactions to buy new weapons, but there’s a common complain in the comments section, that the guns you buy expire, when in most games you have it the whole game, so it takes points away from making it a great customer care game.

Shooty Skies may not be an epic Shoot ’em Up like some Console and Arcade games, but as a casual shooter you can play for free on your iPad, is a great choice, just thing twice before getting a weapon with real money. Pros Cons