Papa Pear Saga by King is a fun addictive casual puzzle game that will have you shooting at fruits and vegetables, bouncing around to make points and getting giant apples into colorful buckets with a face.

Papa Pear Saga it’s a casual puzzle game where you take aim and shoot round pears from the upper part of the screen, into colored buckets in the bottom, passing through and bouncing around dozens of fruits, carrots and flower along the way. The objective of each level varies according to each stage. Sometimes is to make lots of points and reach a certain score, other times you need to shoot certain fruits to make them disappear, other times you need to destroy a covers that’s on each bucket and throw a fruit into each one, etc. 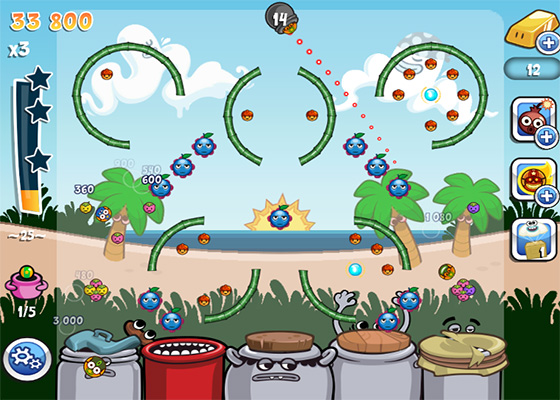 You take control of the pear cannon at the top. You just need to touch the screen to begin taking aim, then drag your finger around to know the trajectory of the pear, and let go so it shoots. Depending on where it falls, it’ll have different effects. Blue berries for example, turn yellow, and then red, before disappearing, they tke 3 hits. Carrots only need one hit to disappear, but they flash for a while before doing so, so the pear can bounce on it for a few seconds at the first hit. And there are stones that can’t be destroyed, and flowers that make your pear bounce really far away. There are boosters you can get while playing, like Fire Pear, that’s very powerful and cat make fruits around it disappear on one touch, the X2 Multiplier which doubles your score, The Extra Pear, a blue ball that when touched by a pear, divides it in two, the giant pear, and a few more. You can’t do much except shooting pears, and you can only shoot 3 in a row, and you have to wait until one of them lands on a bucket to shoot again (not counting if you get the Double Pear), but you can do things like shooting a pear to another one already in play, and change its course. Also, there are Special Items you can use, such as a bomb, which you can place anywhere on the screen to get rid of obstacles along the way. At the end of each level, you get a Rank depending on your score, so you can try again and go for a new record. Then you go to the World Map, and select where to play. The are hundreds of challenges to overcome.

Papa Pear Saga features 2D hand-drawn graphics with a unique funny cartoony look. Fruits and such have expressions, and you can see details like how the giant Papa Pear opens its eyes widely when it bounces, and the buckets have tiny arms that they move around like saying “hey Pear, over here” 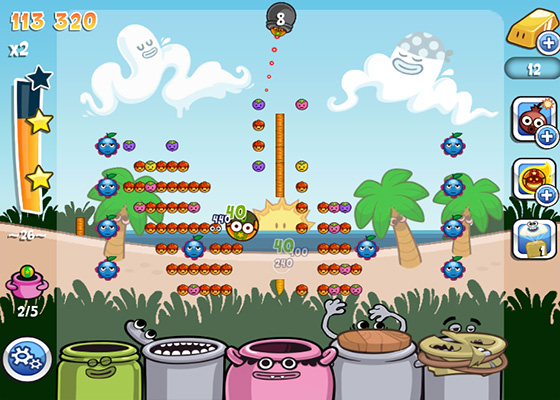 The aren’t many special effects besides bomb explosions and some sparkles here and there when Boosters are used, but everything looks nice and colorful, and there’s really no need for fancy lighting effects and such, everything works out great in 2D art. The backgrounds don’t have much animation going on, but they look wacky and seem to be alive with trees and clouds that have a face and stuff like that. Really a very unique looking game that should have some impact with you thanks to it’s visual aesthetics and the charm of its characters.

Papa Pear Saga features hundreds of stages in different settings such as the forest, beach, volcano, mayan hidden city, Italy, the Netherlands, an icy mountain and much more. The World Map just goes on and on and it has a lot of variety in level design and unique challenges to keep you busy for quite a while. 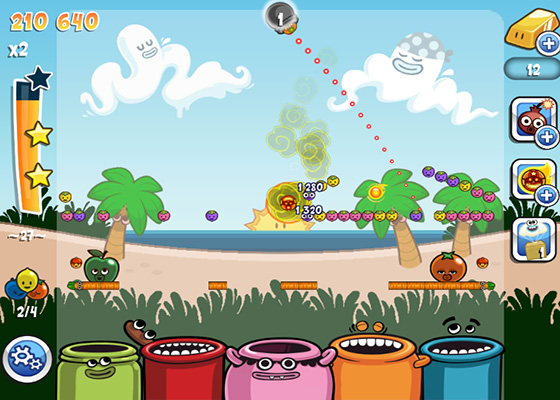 The gameplay itself it’s simple, but as you play you realize that there are many special items to use, and that you can get power ups by performing certain actions. Like if you manage to bounce on a bucket 5 times, you get a x2 Multiplier, if you manage to bounce 50 times with a pear, you’ll get a giant pear sphere. And there are also bonus points you can get, like bouncing on the ceiling gives you 500 points, or if you can survive with the same pear for over a minute, you’ll get thousands of points. Papa Pear Saga is easy to play, but it becomes quite challenging after playing about  20 levels or so, and you can notice how deep it’s play mechanics are once you really need to make an effort to beat a level.

Papa Pear Saga is free to play on Google Play and the Apple App Store. It’s one of those games that give you a certain number of lives and then you need to wait 10 minutes after using them all before playing again. If you’re a good player, you can enjoy the gameplay completely, there are no ads and with some effort you can beat every level. But you can use real money to buy lives, boosters and special items if you want.

Papa Pear Saga is a great casual game that you should try out whenever you’re bored. It’s a perfect example of easy controls, simple but deep gameplay mechanics, lots of challenges, and nice colorful graphics in a free to play package. Try it out now, it should keep you entertained bouncing around for quite a while. Pros Cons