Pix Hop by BNOO Games is a minimalistic title where you tilt the screen to the sides trying to survive the attack of colored pixels and the moving platforms. Easy to pick up and play, and can become quite addictive. Check it out to test your reflexes.

In Pix Hop you take control of a bouncing square character that must avoid falling into the water. The platform you’re jumping on is always changing, with columns going up and down, and you have to try to land on the right place to keep going. 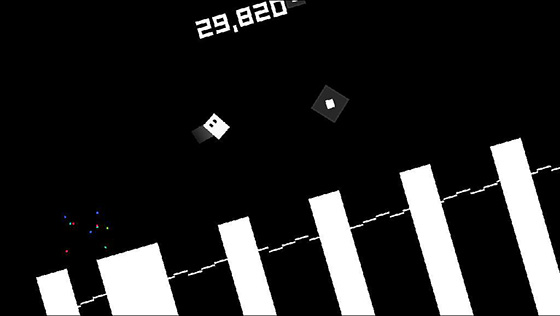 There are 2 control schemes. You can choose to tilt your device to the sides or to touch the left or right side of the screen to balance the whole level so the Pixel moves where you want. Besides jumping on platforms, it can also bounce of the sides of the screen. To make things harder, some enemy pixels will try to take you out. There’s a yellow square that shoots a beam, a blue one that tries to slam you, a red one that explodes and so on. The longer you stay alive, the more often they come around, and after a while you’ll be having two or more enemies at the same time. You can also collect coins to boost your score and get gifts, like new characters to play with, which change the level layout and music. When you get hit by an enemy or fall into the water, you can revive by exchanging 10 coins, or choose to start over. The score goes up just by staying alive, but the counter goes faster the more tilted the screen is. So you may be getting 10 points every second with a 2 degree angle, but 20 points per second if you tilt the screen 20 degrees to the sides. Collecting coins gives you an extra score. And if you manage to collect them in a row, every time a new coin appears and you get it, you get double points. At first 100 points, then 200, after that 400… But if you miss one coin, the next one you collect goes back to 100 points, so try to get them all as they come.

Pix Hop has a simple look, the character is a white pixel with eyes, the platforms are rectangles that just change size, and the water is made up of some lines. The coins are small squares, but they have a  rotating animation, and the enemies are just squares of different colors. All over a black background. 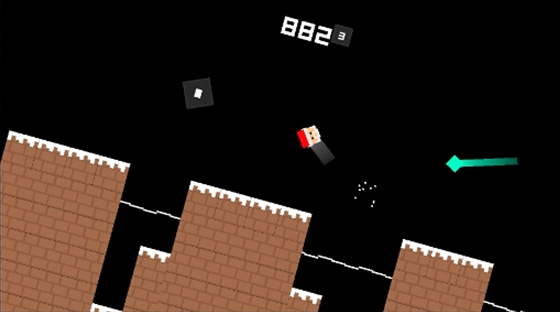 When the character bounces, you can see colored sparks coming out, and the pixel and enemies also leave a fading trail behind to better show the movement. When you use a new character, like Santa Claus, you can see the platforms change a bit, and when you bounce on them, you can see that instead of sparks, you lift snow balls. Another characters, like the farm animals, have platforms with grass on them, and you pick up tiny green squares when you land on them. While Pix Hop goes for an overall minimalistic look, it has enough added effects and variety in characters and platforms to keep fresh. The screen tilting and pixels moving aroung animation is smooth, and the design just fits the gameplay just right.

Pix Hop has a simple premise and design, but that doesn’t mean is easy or lacks a good challenge. While you only try to survive by moving left or right, it has enough elements to hook you into trying again and again. 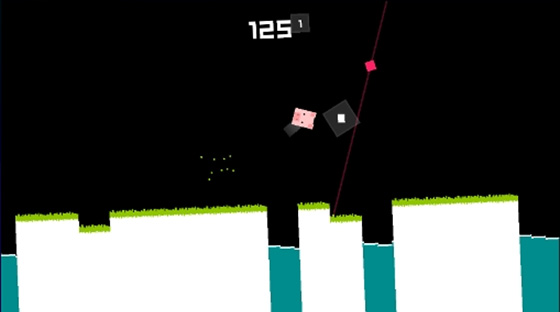 It can get quite addictive just going at it one more time to beat your previous record. The game keeps a record of how many times you played and your highscore, and you can compare your results with players all over the world. The sound effects are well done, and the chiptune music, while it’s a short loop, it’s quite catchy, fits the game just right, and it changes with every character. So choose a random pixel, every time you play you’ll get a slightly different scenario and song. Something else worth mentioning, the game takes a screenshot of your “Time of Death”, and you can share it on social media with your friends.

Pix Hop is free on Google Play. You’ll see some banner advertising after losing about 5 times, and you’ll only see video ads if you choose to when you want to revive during mid-play. It’s not intrusive at all, you may forget the game even has some advertising in it.

Pix Hop is a nice game to just pick up and play, it has 2 different controls, and can become quite challenging and addictive. It does have achievements or extra objectives, but it may have you playing for quite a while just trying to beat your previous record, and it’s always fun too see what you get with a new character. Recommendable for casual players and veteran users looking for a new fast paced title to test their reflexes. Pros Cons