Battle in a world of chaos in Lords Mobile, the latest real-time strategy game from IGG. Destroy all who stand in your way to total domination! The world is yours for the taking in Lords Mobile!

Lords Mobile is an Empire Simulation game with army battles against other kingdoms and RPG elements. You start the game as a hero leading a legion of warriors against neighboring castles being defended by enemy soldiers and a hero-level boss. At first your objective is to lead your army into battle to conquer other lands and make your kingdom bigger and more powerful. 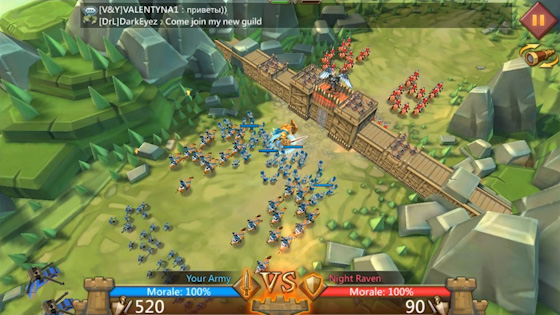 In your turf you have your main castle and you can build barracks to train your soldiers, mines for resources, farms to feed your army and a hospital to recover your wounded allies from battles. Each time you have a new conquered land you can start building, and you can also level up each place so they become faster and more efficient in their production. Building and leveling up takes a few minutes, meanwhile you can go to battles or complete other quests. You can also create an academy to research military science, architecture and other knowledge so you can create new weapons, and build everything faster. Each time you complete a quest, you get resources for your kingdom or items for your heroes. Building or leveling up places, requires stuff like gold, iron, wood, and training new soldiers also need crops so they all can eat. You may also get the game’s currency, purple diamonds, that you can use to speed up the upgrades of buildings or move your heroes to the next rank. Besides army battles, you can play the Heroe Stages. This is the easiest way to get new heroes, and they play like more traditional RPG battles. You choose up to 5 different characters, and go to fight a handful powerful monsters in levels divided in a few rounds. The final boss may join your party after admiting defeat. In the hero stages, you can also get items to equip your main characters, armor, weapons and accesories to make them stronger. In Heroe Battles, you can also activate your heroes special hability when they fill a special bar, and choose which enemy to attack with it. The warrior hits the ground creating a powerful shockwave that affects many monsters, the archer can attack a single far away rival with an enchanted arrow, the mage can create a tornado that hits several enemies and so on. As you level up and advance through the game, you’ll be able to visit the world map, where you can go on Monster Hunts after you research that at the Academy. Sending your heroes to slaying giant beasts is the best way to earn lots of EXP and new rare equipment. You can also join other guilds online to get even more rewards.

Lords Mobile features nice looking colorful 3D graphics. The overall style is a little cartoony, with the characters looking like they’re from a medieval animated feature film made by Disney (or something like that) but of course, with fewer polygons. 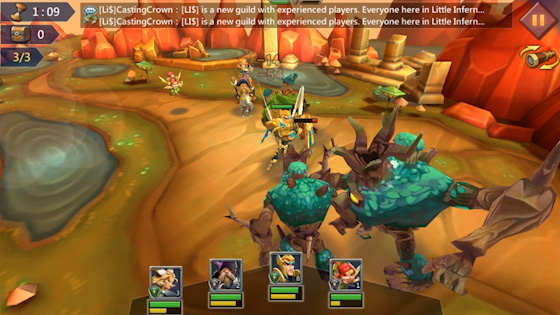 When you play army battles, you can see all characters moving around fighting and reacting to attacks. The camera follows the center of the action, and you’re able to change the camera to another angle, and it zooms in a little each time you do it. When you’re in the Heroe Stages. you can see that the characters are pretty detailed up close, and the animation is pretty well done. Each heroe and monster has unique attacks and special habilities, and there are many types of characters for variety; you won’t just see the same model with different colors, a common practice in other RPG titles. Magic and Special Habilities show effects such as shining weapons, lighting, glowing sparks and activating some attacks makes the background change to a dark tone. Some moves like the warrior shock wave, makes everything in slow-motion when he jumps, and the earth shake when he lands, creating a blast of energy that makes the affected monters fall on their backs. It’s also worth mentioning that the kingdom and world maps are animated, with waterfalls, clouds and more moving elements, making all seem alive; and when you level up buildings, you can notice physical changes appearing in them, not just a change of color or something minimal.

Lords Mobile has everything you’d expect from a high quality real-time strategy game with RPG elements. If you want to play by yourself, there are many kingdoms to fight in army battles, or go on to the heroe stages and mosnters hunt; and once you get online, you can challenge millions of players all over the world. 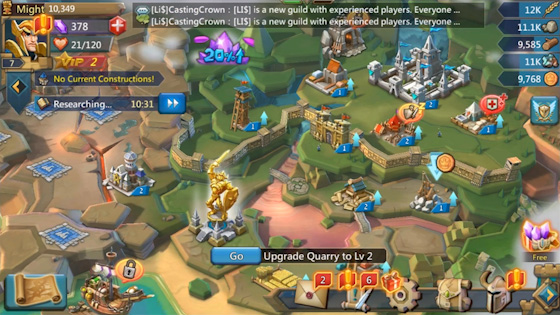 There are many different types of heroes to join you, each with unique skills, and items to equip. The variety in characters and monsters is great, and you’re always finding new treasures and resources. It’s worth mentioning the audio department. The music is epic and really sets the mood for the army battles or the heroe stages, it changes according to what you’re playing and you can hear fan fare after a succesful battle, or a sad tune if you get defeated. The sound effects are well done, with metal clashing and spells that seem like they’re out from a fantasy movie. Also, the characters have different voice samples, unlike some games where you always hear them repeat the same thing over and over again.

Lords Mobile is free on Google Play and the Apple App Store. You won’t see any advertising, but there are in-app purchases. You can buy in-game currency or super special items and other content, but it is not necesary to spend a dime in order to enjoy the full experience.

Lords Mobile is a great Empire and Medieval-Fantasy Game that has lot of content to discover. Many similar titles only have army battles, but here you can enjoy playing with a party of 5 heroes like a more traditional RPG game, complete with leveling up and equipment of weapons, armor and such. The gameplay may not be very action oriented like some Console or PC titles, but it’s the perfect choice for mobile users that are looking for a high quality experience of the genre. Download now, it’s free. Pros Cons