Trained for years in variety performance, the exceptionally artistic and talented cats of Cat-A-Pult now need you for their next amazing feat – to build the tallest cat tower the world has ever seen, exclusively available in this click game!

Cat-A-Pult: Toss 8-Bit Kittens is a casual game about stacking blocky pet felines on a platform until they fall down from imbalance or you fail to make the cat land on the meowing tower. 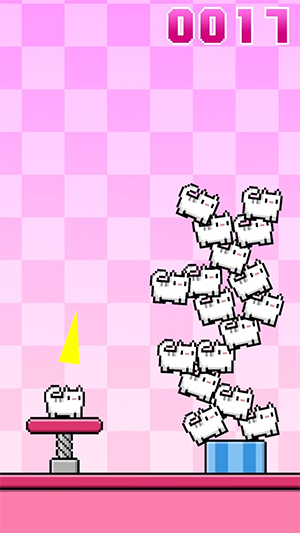 You start with a kitten standing over a pink platform on the lower left corner of the screen. Touch it and a yellow arrow will appear. Drag your finger around at the back to the cat to meassure the strenght of the launch and direction. Once you release your finger, you’ll throw the kitten, and if it lands on the blue platform, you’ll get to repeat the process with another purring pet. The goal of the game is just to make the tallest tower possible. When you sucessfully land another cat on top of the formation, you’ll earn one point, and you’ll keep on getting +1 on your score until the tower falls down or you miss a launch and the cat misses the objective. After you fail, you can exchange 5 points for another try or start over. With the points you win, you can unlock new designs for the cats, like having them wear hats, caps, shirts or other accesories. There aren’t any extra challenges, but if you get into it, you’ll problably be trying to beat your record over and over again.

Cat-A-Pult features retro pixel art graphics for the cats and platforms. Even though they’re low resolution, the costumes for them are detailed enough so you can make out what they’re trying to be, like a King, Swag Cat, Super Man suit, Indiana Jones cosplay, and so on. 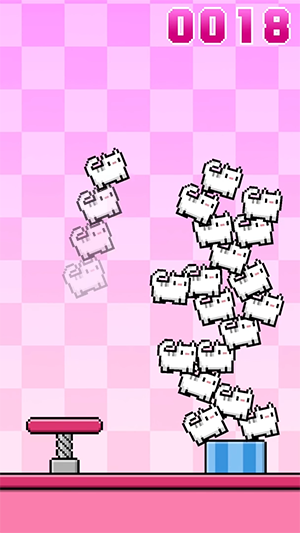 The background is a checker pattern, but it doesn’t just use flat colors, you can see gradient shades, and it becomes darker as you go up. It starts light pink at the floor level, and becomes a deep purple as you reach new heights. Overall the presentation is pretty simple, like its gameplay mechanics, but it’s more appealing than most casual games with only geometric figures over a blank background.

The physics of Cat-A-Pult work perfectly, and you can see how gravity affects your launched cat, and the way the tower behaves when a new one arrives and moves the whole feline structure. 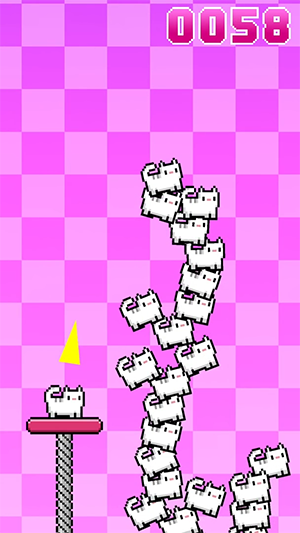 While the core gameplay can get addictive for users that enjoy this kind of games, it only has one song playing the whole game, and it lacks sound effects, which becomes boring fast. Also, the yellow arrow doesn’t tell you much about the cat’s trajectory at first, and there isn’t a tutorial, so you’ll be guessing the first 5 throws or so. It should be mentioned that the game is translated to many languages, but there isn’t really much text to read, and given that it doesn’t offr achievements or bonus game modes, it really is an average title to pass the time.

Cat-A-Pult is available for free on Google Play and the Apple App Store. You’ll see banner or video advertising after losing a few times, but that’s to be expected. The ads free version costs 99 cents, about the standard for a casual game of this style; so if you’re one of those players that gets hooked into it, you may consider the premium app.

Cat-A-Pult: Toss 8-Bit Kittens is a very simple casual game meant to get distracted for a couple of minutes throwing pixelated cats into a tower and that’s it. The gameplay mechanics are nothing you haven’t seen before, and overall the experience is pretty average, but at least the unlockable cats look funny. Try it out, you may end up trying to get a few of the kittens with costumes. Pros Cons