Chamber Raider by IDE Developers is an Adventure/Platformer game that puts you in control of an explorer looking for treasure in caves filled with zombies, mommies, lava pits and other dangers.

Chaber Raider is a traditional sidescroller platformer with exploration elements. You take control of an archeologist that goes into caves collecting coins, finding treasures and defeating enemies such as zombies, bats and mommies. The overall objective of each level is just to find the exit, which is a Goal much like the one found in “Super Mario World”, but if you want, you can look for 3 Special Gems in oder to get “100%” of the level. 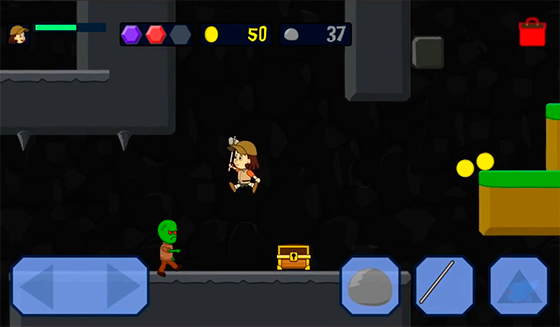 The touch controls are pretty easy. You have arrows to move left and right, a button to throw rocks, a button to attack with your weapon, and finally the jump arrow. In most 2D platformer, you can make the jump low or high depending on how long you keep pressing the button, but here the explorer always jumps the same height. Later on you can get the ability of jumping on walls. You collect items along the way to make weapons. There’s a store where you can purchase materials such as stones, rope and sticks to make a rudimentary hammer, or you can buy an already made weapon, such as a sword. One interesting aspect of the game, is how lives work. When you lose, you can trade the rocks you use as weapons to continue where you died. But each time you die you get asked for more. So in a level, the first time you die, you exchange 10 stones, then 15, then 20, and so on… If you don’t have more rocks, you can purchase more with real money through in-app transactions, or you can choose to restart the level.

Chamber Raider looks like a web animation made in flash back in 2000, it is not appealing at all, the designs are simple, plain, lack shadows/lighting details and the characters are pretty much forgetable. 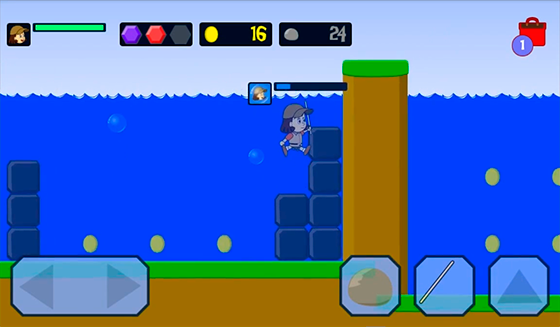 Also the animation is pretty bad. The character moves her limbs just by rotating shoulder and legs at a pivot point like if it was a paper dummy. Enemies show some expressions when attacking, and getting hit, and there are some dying animation that change the design a little bit, but overall, the game offers just a mediocre 2D visual experience that does not have anything going for it at all.

Chamber Raider has some gameplay elements that ad some variety to the platformer genre. You can equip items such as armor and boots to be able to walk on lava, you can collect or buy materials to create weapons, and you get new abilities like swimming and wall jumping by talking to a pharaon that gives you a “test of courage” so you can then use your new moves in regular levels. 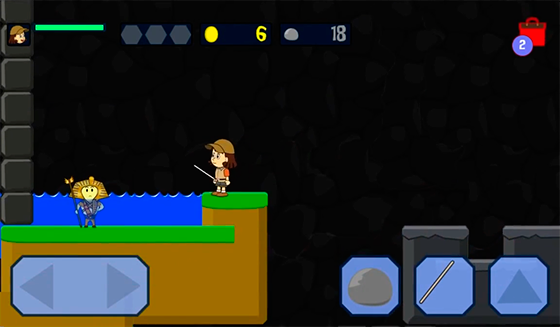 If you decide to just look for the exit of each level, you’ll finish the game quick and easy, but the interesting part is looking for treasure and exploring every way to collect gold and gems. Then you’ll find a challenging adventure, since by the mid levels being able to get to the goal with the 3 gems is not exactly a walk in the park. As far as platformers go, you may want to try out a classic 2D game made for consoles if you want a great experience, but for a mobile free game, this one is worth a try, but don’t expect to be amused; it’s not a Sonic or Mario title.

Chamber Raider is free to download in Google Play, but you’ll see advertising in-game. There’s an ad banner in the top part of the screen that shows way too often. There are also in-app transactions such as new characters and items, and you may consider buying them to support the developers, but the extra content is not very appealing and may seem kind of expensive for the average Android gamer.

Chamber Raider is recommended only for those looking for a casual free platformer. It does have some elements that make it stand out gameplay wise among mobile title, but any 2D sidescroller console game from the 90’s is just a way better overall experience overall. Pros Cons