by: Most Played Games

A very simple and fun addicting game, just hold to Charge the Batteries. Make sure they have a good charge else you will run out of juice!

In impossible Charge your mission is to get just the right amount of juice the game ask you to. Touch the screen and hold to charge, and release to set that percentage of energy. If you set the objective amount between the numbers asked, you win the level and move on, if not, you have to try over and over again until you get it correctly. 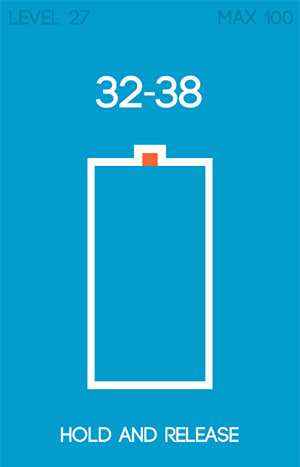 The game starts quite easy, asking for a charge between 20-80, then 30-40, later on you have to get the charge among 3 numbers like 52-55, and some levels ask you a exact percentage, like 50, 75 or 99. The charge speed is not always the same, so it’s hard to guess in the first try where exactly to lift your finger from the screen. There aren’t marks or anything to help you meassure where’s the middle of the battery or something like that, just try and error until you get the percentage you need to beat each level.

Impossible Charge has a minimalistic design. You only see the white battery contour over a blue background and when you begin charging it, you’ll see how you start filling it with a yellow color, and that’s it. 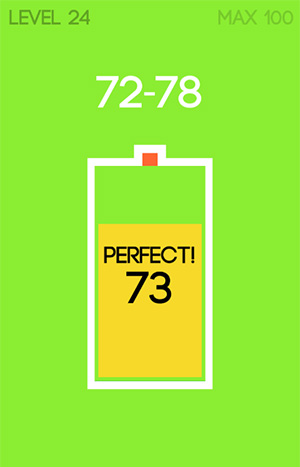 If you win, the background turns green, if not, you get a red layer. Then there’s the simple text telling you which level you’re playing, the charge needed to pass it, and you get “Perfect” or “Fail” depending on your performance. Overall, the visual design is very simplictic, it works given the gameplay, but certainly could have some variety in colors or some other elements so it wasn’t as bland.

The idea behind Impossible Charge is perfect for a casual simple game with little interaction on the players part, but can become pretty addictive once you really get into it. 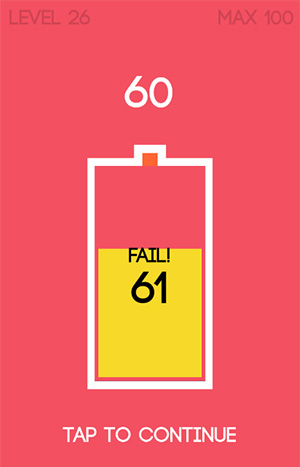 There are achievements like “Get to Level 25” or “Try again over 20 times” and similar extra objectives, but nothing that really adds to the experience. There isn’t any music, just some sound effects, and overall you just see a few colors and lines on screen. While it could’ve used some extra elements and variety in color for a more appealing look, the current design works fine for the casual audience it meant to, it’s just that after playing a few minutes, you may get your “taste” out of the game and move to something else.

Value for Your Money 87%

Impossible Charge is free on Google Play and the Apple App Store. After failing the same level about 5 times or so, you’ll get a video ad that you can skip after 5 seconds. Since every time you try again can last just 3 seconds, you’ll be seeing many ads, but if you’re a good player, it’s about the advertising you’ll expect to see in a game of this kind.

Impossible Charge is an addictive minimalistic casual game that doesn’t need much to hook you into it; before you know it you’ll be trying  to get 99% charge again for the 20th time, and still feel like going just one more time… While the overall experience it’s not very memorable, may seem like it lacks content for the average user and doesn’t have much replay value, if you enjoy simple precision challenges like the one offered here, you’ll have some minutes of fun. Pros Cons