SHMUP Holic took classic arcade shooting games and remade them with 3D graphics to create ‘Retro Shooting and provide you with a thrilling and fun time. Experience the fun of a new arcade plane shooting game!

Retro Shooting is a SHMUP with a retro arcade feel. You control a plane that must shoot down every enemy on sight in a set of levels, some of them with a Boss Fight at the end. 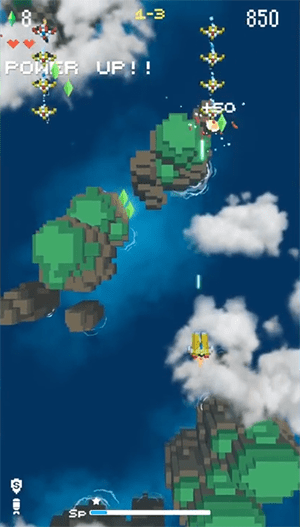 You shoot automatically, and you move your plane by touching it with your finger, and dragging it where you want it to be. It will follow your finger so you can avoid enemy bullets. You start out with a single shot, but you can collect medals left by special enemies when you destroy them, that power up your shot, and after collecting several you can get rapid machinegun style fire, shoot diagonally, and even missiles, which are launched every few seconds, and can follow your enemies. But be careful, there are some powerful aircraft that can send homming missiles at you. Besides collecting medals, regular enemies also leave behind green crystals when destroyed. They’re currency that you can trade for Power Ups and boost your plane stats, such as Bullet Power, Rate of Missile Fire, Shield Time and Special Attack. In the bottom of the creen there’s a SP bar that fills up as you shoot down enemies. When you fill it, touch the screen with two fingers to stop time and choose to unleash a special attack or defense. There’s a shield that makes you invulnerable for a few seconds, a bomb that attacks all enemies on the screen, and a powerful laser that delivers lots of damage to whoever touches the ray, which is very useful against bosses. You have 3 lives per level, lose them all, and you can trade 1,000 crystals to continue or start over. Once you beat a level (or die trying) you can select your next mission, power up your ship using your earned crystals or buy items such as starting out with your SP bar full or with a shield on for a while.

Retro Shooting features models made out of Voxels, like a 3D pixel, everything is made out of blocks of the same volume. They are quite colorful and it’s a distinct old school arcade look, with flashy special effects for bullets and explosions, to create a unique visual experience. 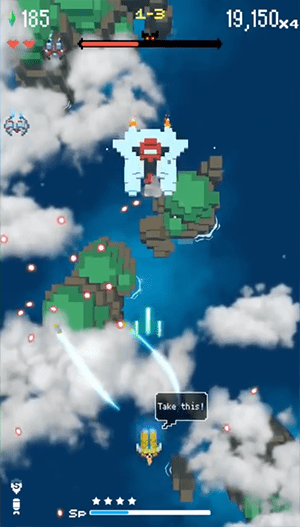 The backgrounds are simple. Most of what you see is the ocean and some clouds, which look handpainted and hi-res, in contrast with the rest of the game models for the scenery, which are bown and green blocks piled up to create islands and mountains here and there. The animation is pretty good, there are many kinds of enemy ships which attack and move in different formations. The bosses are quite different from each other and have lots of weapons that use transparency and lighting effects, like death rays, homming lasers and lots of explosives.

Retro Shooting features 90 stages of increasing difficulty, with lots of different enemy ships to take down, and you can select up to 14 planes to use. 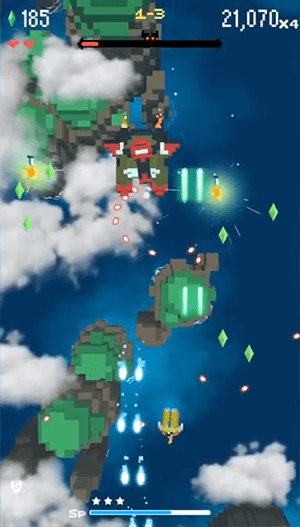 Besides just finishing the levels, which by themselves will keep you quite busy as there’s some real retro arcade challenge here, there are special objectives to complete while playing the regular stages. These are requierements such as “Complete the Level without taking a hit” or “Don’t use the Special” or maybe beat the boss in 10 seconds. These gives more variety and replay value to the game. There’s also an endless mode, and achievements for the whole game. And you can set your highscore for the whole world to see in the global rankings.

Retro Shooting is free on Google Play and the Apple App Store. With normal gameplay you won’t see any advertising, unless you want to continue and don’t have enough crystals, you can watch a 30 seconds video ad. You can also purchase crystals with real money, to make your ship more powerful, thus the game easier, but a hardcore arcade SHMUP player won’t need that.

Retro Shooting is a very fun Shoot ’em Up with mobile touch gameplay that does have the elements of an old school SHMUP, but adapted to be played in tablets by both old and new generations. It’s very fun and challenging, and even if you lose the same level 5 times, you’ll be trying to beat it over and over again given the great and smooth gameplay. Check it out now even if you’re not a fan of the shooter genre. Pros Cons