Do you think you have what it takes to match the same colored monsters, and save the gingerbread cookie friends? Monster Busters: Hexa Blast is a brilliant match three puzzle game – a brand new yet classic match 3 style game with a hexagonal twist. If you love fun casual games and match three games, you are bound to love Hexa Blast.

Monster Busters Hexa Blast is a Match-3 Puzzle game with a hexagonal twist. Like most games in the genre, you have a grid with colored monsters, touch one and switch it with a monster in another space, if you line up at least 3 monsters of the same color, a match will be made and they will disappear. But here, you can only make matches vertically or diagonally, since the shape of the spaces doesn’t allow for horizontal line ups. 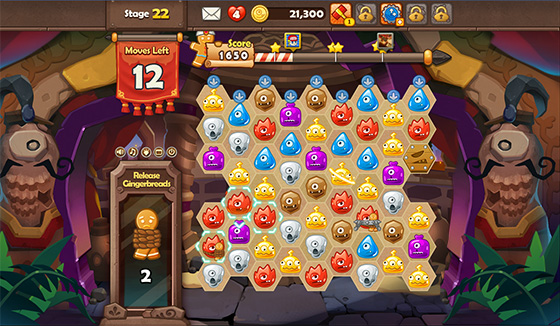 The objective of each stage is different. At first, you need to eliminate a certain number of a type of monster, such as matching 6 stone monsters to beat the level. Then you get to the Ice Levels, where gingerbread coookies are trapped below frozen spaces, and you need to make matches on them to get them free. There are also wooden obstacles that you destroy by making matches next to them, and in later levels they get a golden plate, and you need to make matches next to them twice to destroy them. Another kind of mission is to release gingerbreads tied to a monster with a rope, and they get free by matching them. In harder stages, they are tied with steel chains, and to make things more difficult, you can not switch chained monsters. And when you match them, the chain becomes a rope, so you need to match it one more time to free the gingerbreads, but now you can at least move it. When you line up 4 monsters, you get a Ring Bomb, wich explodes in the direction of the ring the mosnter has around it, and takes out all monsters and obstacles in the way. When you manage to make a 5 match, you get a Special Item depending on the shape. If the match is a line, you get a Rainbow Hammer, which when switched with any monster, it’ll eliminate all monsters in the grid with that color. If the match is made by a lining up 3 monsters vertically and 3 horizontally in a “T” or “V” shape, you get a Round Bomb, which when matched, explodes taking out the monsters in the spaces around it. Finally, if you match 5 monsters into an “X” shape, 2 horizontal matches sharing the middle monster, you get the X-Bomb, which when matched, explodes eliminating all monsters in the diagonal rows. Besides Bombs, there are other Special Items you can get like the Magic Hammer, which you can use to attack any space you want, and the Time Machine, that let’s you go back to the previous turn, very useful when you realize there was a better move you could make, since there’s no time limit, but you have to beat the level using a certain number of moves.

Monster Busters Hexa Blast features a great 2D hand-drawn art style, and it takes place in an arabic setting. The background is not animated, but the design is pretty good and detailed, but a little dark as to not take the player’s attention from the grid. 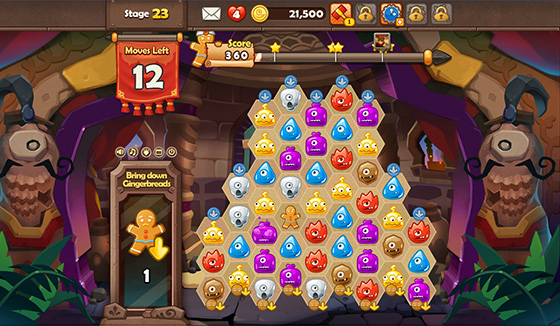 The monsters are colorful and move around a lot, giving an ilusion of life. When you touch one, it begins bouncing and performing an action according to its element, like the red mosnter sorround itself with a flame, or the venom monster makes some poison bubbles. It makes for a more complete visual experience, and also the Bombs and Special Items effects take over the whole screen and look pretty good.

Monster Busters Hexa Blast doesn’t really innovate the Match-3 gameplay formula a whole lot, but the hexagonal twist certainly is a welcomed feature and does create a different experience for puzzle enthuasiasts. You see the basic objectives and items found in the genre, but it’s all perfectly executed, with great graphics and an Arabic setting not so commonly seen to stand out from the bunch. 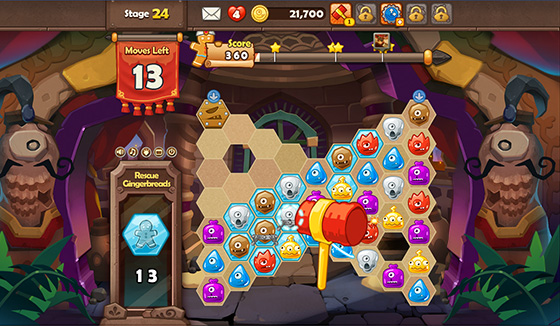 The game offers over 800 stages, and more are in the way. And there are also Secret Quests you can unlock by performing tasks such as getting 3 Star Ranking in Boss Fights or eliminating monsters while in the world map. While if does gets a little repetitive for some one who played the original Monster Busters title, it has enough to offer on its own to keep you entertained for hours and hours.

Monster Busters Hexa Blast is free on Google Play and the Apple App Store. You won’t see advertising, but the game does ask you to share your score and recommend your friends to play it very often. When you lose, you can get 5 extra turns for $0.99, which is certainly not cheap at all. Still, you can beat every level without making in-app transactions, so check it out.

Monster Busters Hexa Blast is a great option if you’re looking for a Match-3 puzzle, everything here works great and it’s a perfect example of how a game in this style should be made. Simple addictive gameplay that gets challenging as you go on, variety in mission objectives, extra levels you can unlock, many special items to use, and hundreds of levels to play, all in an awesome 2D animated package. Try it out now. Pros Cons