Explore China’s bamboo forest, volcanic ranges, and icy northern border in your quest to return the kidnapped panda pups back into the loving arms of Mama Panda. Play with explosive power-ups, brick-busting blasts, and sweet strawberries that will propel you through this puzzle adventure.

In Panda Jam you need to save panda cubs that are sitting on top of a pile of colored block. To do so, you only need to touch a set of 3 or more blocks of the same color together, and they’ll disappear, bringing the baby panda closer to the ground. Once every cub lands, you’ll win the level. Just take into account that you have a limited number of moves. 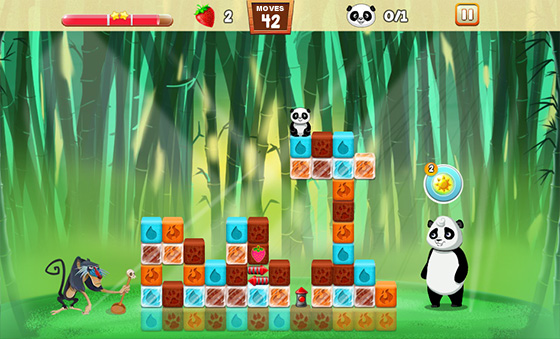 The baboon is using a magic stick to create more rows that appear in the bottom of the screen, and every few seconds more blocks will appear below. If you manage to eliminate a whole column, the remaining blocks will get close together so you can keep on making matches. There are 4 boosters you can use to help you in your mission. There’s a firecracker that when you shoot it, it eliminates all blocks in the column above it. There are also a couple of rockets that are shot horizontally, taking out a whole row. Next you have the round bomb, which explodes getting rid of the blocks surrounding it, and finally you have the colored bomb, which when you touch it, disappears all blocks of its same color. In later levels you’ll see blocks trapped in ice, which can’t be matches by themselves, but if there’s a free block next to them, you can touch the whole lot and the freezed blocks will become normal one you can match in the next move. To make things easier, there’s a sun batch Special Item that melts all the ice in the screen. Besides the regular baby pandas, there are special ones that wear costumes, such as a football player with all the gear on, or a knight armor. When you free them and beat the level, you’ll see an album containing them. You can also get special pandas by getting a 3-Star Rank in all the levels of an Island in the World Map.

Panda Jam features 2D hand-drawn animation, and it’s mostly average at best. Another game by SGN with a similar setting, Panda Pop, looks so much better, and here, while you can’t really say it looks “ugly”, it’s plain and simple, definetely not on the level of the most popular puzzles. 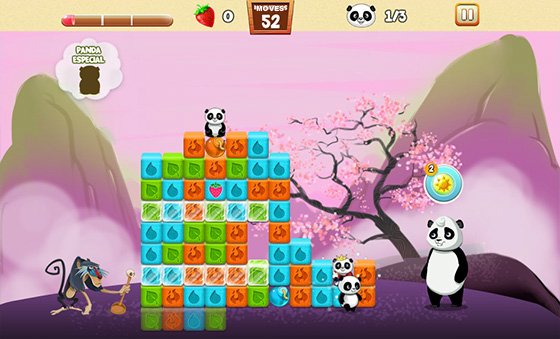 The baby pandas not move around much, and the blocks exploding and special item effects just look OK. The backgrounds look nice, they have a chinese painting style and each island has its unique setting, but most of the time you’re not really appreciating it, because there are similar games that just catch your attention with awesome detailed places to look at. Overall the visual experience here is kind of mediocre.

Panda Jam has over 260 levels in 24 unique islands, which is enough to keep you entertained for hours, if you decide to keep playing. The gameplay is pretty good and gets addictive, and by the third island you may lose a couple of times before getting it right. It just feels like you can’t do much without buying power ups by level 20. 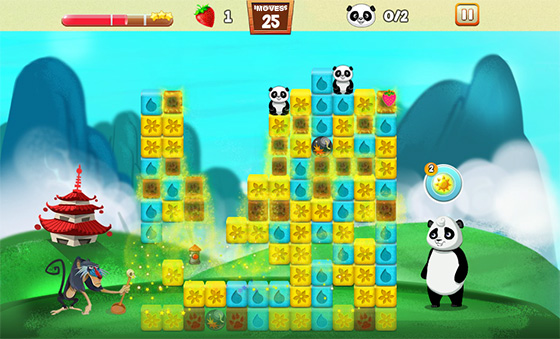 By level 20 you may feel like you got the hang of the game, and may start to feel like you already played all levels, since it begins to get kinda repetitive. Once you can use every booster and special item, you may leave it at that. It’s a nice touch to be able to get rare pandas in costumes, but they actually don’t look so good. Maybe if the game had better graphics and music it would be worth to play more than 20 minutes or so.

Value for your Money 67%

Panda Jam is free on Google Play and the Apple App Store. There are in-app transaction for stuff like spinning a wheel to get coins and buy items, and paying almost a dollar for another spin just seems to be an exagerated price. In harder levels you’ll definetely need to buy boosters in order to win, and they’re not cheap at all, but at least you can get 80% off on certain dates.

Panda Jam is an OK casual puzzle that can get pretty addictive and it’s gets quite challenging in just a couple dozen levels, but the best way to describe it it’s “average” since there are way better games in just about every aspect. It’s entertaining enough if you’re pretty bored and have nothing else to play, just keep in mind that there are puzzles with higher quality. Pros Cons