Endless Doves by Nitrome is a game about a man collecting doves while sleeping. He dreams of flying… Who is he? Why does he crash? How does he fly? That doesn’t matter! What does matter is obsessive bird collecting!

Endless Doves is an Arcade Game where you take control of a man dreaming about flying around in a random generated house and having birds follow him when he passes near them. It’s similar to Flappy Bird, but instead of “flapping” you rotate the character clockwise or counterclockwise. 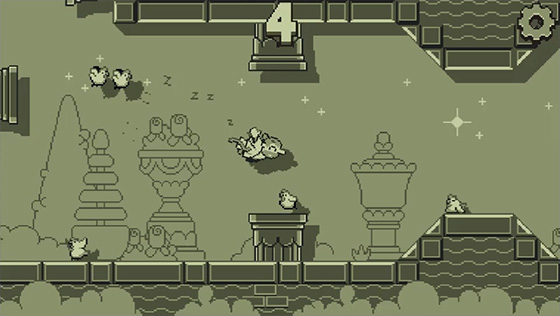 There are two control modes, you can press the left side of the screen to “do a barrel roll”, and fly upwards to the left until you complete a circle, or press the right side of the screen to rotate clockwise. You can also use motion controls and tilt your device left or right, which is actually pretty responsive and it’s all about personal preference. The objective of the game is to collect as much doves as you can, so you need to advance through the level without crashing into walls or obstacles. You don’t need to touch the birds, just to pass near them so they start following you. At first, doves are currency you can use to unlock other birds like chickens and pidgeons, they’re all worth the same and you only change which one to collect in the level for a little graphic variety. Levels are random generated, so you can’t memorize what’s coming next and it’s all about testing you reflexes. By the time you get 10 birds, you’ll have to cross very narrow paths and have very precise timing in order to keep going. Also, some birds will be waiting for you in pretty difficult to reach spots, so you may want to fly over them to avoid a certain crash.

Endless Doves features a pixel art style reminiscent of the monochromatic 8-bit Nintendo GameBoy, but in high resolution and wide screen. The flying man looks good and you can see how he leaves a trail of “zzz” when advancing. 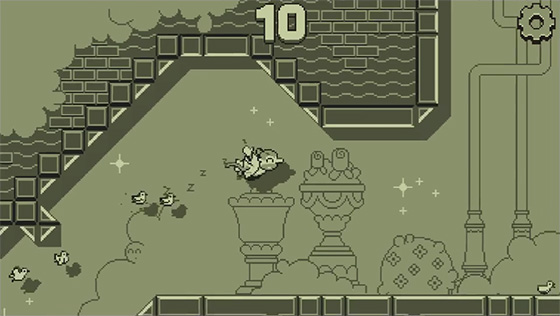 Each of the birds following him does so at its own peace, and they follow different paths, and their flapping animation occurs at different times, so they look like single entities giving the game a more “living” feel. Also the characters cast a shadow at the background, which is a wall with lines resembling furniture, plants and other household objects. There are also stars shining and happy clouds. While you won’t see any fancy multi layer scrolling, it looks pretty good and fits the style of gameplay perfectly.

Endless doves can get quite addictive at first, while you’re getting the hang of the controls you’ll be crashing a lot before even getting one single dove, but after a few minutes you can get pretty hook into it, since it’s different than an infinite runner, jumper or Flappy Bird clone. 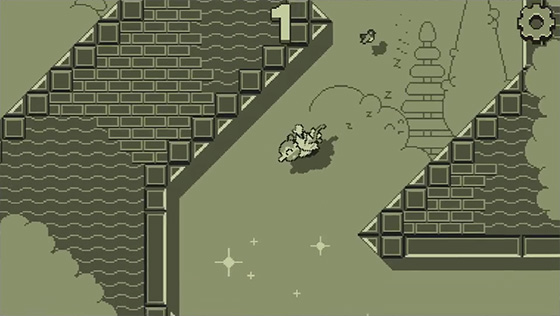 The Random Levels will keep the experience fresh for a while, but after you’ve seen the common elements repeat themselves a couple of times, you may just try to unlock another bird and leave it at that. There are no achievements or something to keep you going except breaking your previous record, and that won’t keep the attention of most players for longer than 15 minutes. There’s another version of the game called “8-Bit Doves” which is level based, and if you prefer to beat established levels, maybe you should try out that one, but it’s a paid version.

Endless Doves is free on Google Play and the Apple App Store. Like many infinite runners and similar games, after losing a few times you’ll see a banner advertising, but that’s to be expected from this kind of games. You can lose 2 or 3 times and still not see an add, so it’s not really disrupting the gameplay.

Endless Doves is a good retro style “infinite flyer” arcade game that will test your reflexes to the max in its random generated levels. It takes a while to get used to the controls and how the main character moves in his dreams, but once you understand how it works, the game can get pretty addictive. While the fun only lasts for a few minutes for the casual players, fans of endless runners and similar apps may get into it a while longer. If you like the endless platforming genre, check it out. Pros Cons