Travel through the most fantastic and original places you have ever seen filled with chocolate and sugar. This new sweet adventure has been developed for more than two years by Sugar Arts to offer you a unique sensation in match 3 style games.

Aurora Sweet Adventure is a traditional Match-3 Puzzle where you line up candies, cookies, cakes and more pastries in order to win. In the grid, just touch a dessert and drag it left, right, up or down; if at least 3 are lined up, you’ll make a match and they’ll disappear, if not, the bakery dishes will go back and you’ll have to move something else. 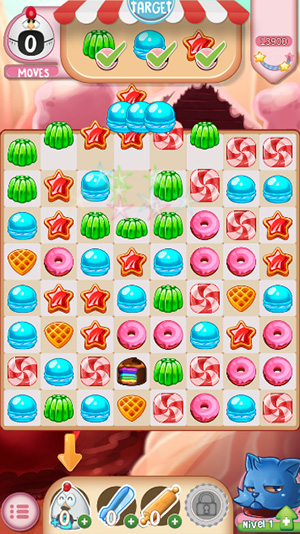 In some levels, you just have to reach a certain score by making matches, and other times, the objective will be to get a certain amount of a specific element in the grid. There’s also a cooking level where you have to keep the oven at the right temperature until the end. The blue jelly makes it cooler, and the red cookies hotter, and your goal is to keep it warm until the last move. Finally, there’s a boss fight, where certain types of pastry damage the boss character and you have to deplete the Energy Bar on top of the screen. As usual with these games, if you line up 4 elements, you get a vertical or horizontal bomb, and if you make a Match-5 in L or T shape, you get a bomb that explodes taking the surrounding elements. If you manage to create a line with 5 elements, you’ll get a rainbow cake, which takes out all the desserts of the same kind when you switch it. In the bottom of the screen there are power ups you can use at any time. A timer in the shape of a chicken that gives you 5 extra turns, tongs that let you switch any 2 elements in the grid, and a rolling pin that affects a whole row or column. When you defeat the cat boss, you can use it to eliminate any element in the grid, but after each use, you have to wait 10 turns to use it again. After you win a level, you get a 1, 2 or 3 Star Rank depending on your performance, and then there’s a “Spin The Wheel” Minigame where you can get up to 3 prizes depending on your rank. They’re usually coins you can trade for diamonds, which you use to buy boosters and to level up the boss abilities. 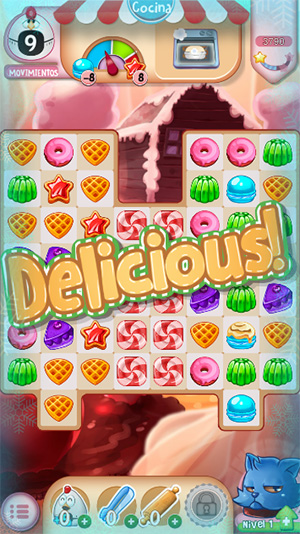 When the elements in the grid move around, you can see them changing shape, becoming bouncy when they land on the spaces. In the collect desserts levels, they become big and go to the counter on top of the screen, and the special lighting effects when they disappear have sparkles and fading for a nice visual experience. The characters look good, but they’re mostly portraits and you see them in only 2 or 3 different drawings. When you make combos, you get animated text like “Delicious!” and “Very Good” in a cookie like desing. In the oven level, the sides of the screen become blue for a “Freezing” look, or get a red hue when you’re getting too hot. The backgrounds are static, but there are many settings depending on where you’re playing in the world map. Overall, there’s room for improvement, but the game offers a high level of attention to detail.

Aurora Sweet Adventure has everything you’d expect from a puzzle of this kind, with pretty graphics, nice music and likeable characters, and while there are many Match-3 Games with the cooking game, here you’ll see a few things that aren’t so common in the genre. 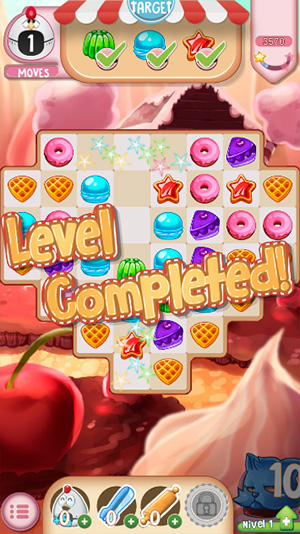 Other puzzles have boss fights, but here they give you a special booster that you can level up. The cat let’s you take out any element in the grid and then you have to wait 10 moves to use it again. Exchange some diamonds to get the Level 2 cat, and then you can eliminate 2 stuff on 2 spaces, and then wait only 5 turns to be able to do it again. And there’s a Level 3. In many games, you’ll have to spend real money to get more power ups, but here it’ll depend on your ability, since getting a 3 Star Rank earns you many coins inthe spin-a-wheel, if you’re lucky. The levels themselves have nice design, they’re challenging and can get pretty addictive if you’re into the genre; and it doesn’t feel like you’re playing the same thing over and over. It’s a well thought game and it shows.

Aurora Sweet Adventure is free on Google Play. After beating a 2 or 3 levels, you’ll see a video ad that you can skip after a few seconds, like it’s common in this kind of games. You can also get in-game currency by watching 30 seconds ads, but if you’re a good player, you may not need to, since it’s not so hard to get golden coins and buy diamonds for power ups and stuff.

Aurora Sweet Adventure it’s a welcomed addition to the Match-3 Puzzle scene. The cooking theme has been used many times, but this game has enough elements to stand out, and it’s a recommended choice if you feel like downloading a new title of this style. Pros Cons