Run, jump and slash your way through a vast world of platforming challenges and embark on an epic adventure! Help Mahluk on his adventure to stand against darkness and bring back the peace and serenity that once was.

Mahluk: Dark Demon is a 2D sidescroller action platformer where you explore levels to collect magic potions, open treasure chests, and fight night monsters until you reach the level exit. 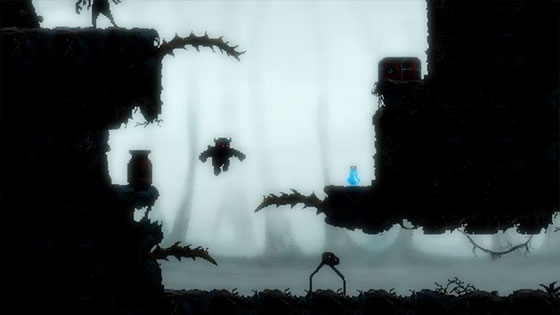 You control your anti-hero by pressing the arrows in the lower left corner to walk around and duck down, and using the action buttons in the bottom right corner to jump (you can also jump in mid-air), attack with your sword and shoot magic projectiles. But first, you must collect potions that give you magic powers, the red ones give you 3 fireballs, and the blue ones give you ice blasts, which can freeze enemies for a few seconds. The objective of the game is just to reach the end of the stage and enter the skull shaped cave. Besides monsters that will be trying to stop you, the will be many enviromental dangers to overcome, like spikes, plants with thorns and bottomless pits. Each level has 1 or 2 checkpoints, so if you die, you can continue your quest from there. You have 3 lives and may find more while exploring, so be careful or you’ll have to start over. Hidden among the levels there are vases filled with coins and gems, and treasure chests that have more valuables, but are harder to find. Sometimes you’ll be able to break walls with your sword, and dig secret passages that take you to a chest which contains a rare item. In the game menu, you can go to the store to buy stronger weapons and level up Mahluk. There are platformer sections, where you’ll have to activate switches to make floating blocks move, and you have to jump on them to get to new places. Sometimes a path will be blocked by a huge door and you’ll have to find the switch to open it, so there are little puzzle platformer elements in the game.

Mahluk: Dark Demon features 2D Pixel Art graphics, in a semi-silhouette style. The foreground looks almost all black, but you can make out some details in the characters and the stage of other color, like red eyes or silver on the treasure chests lines. 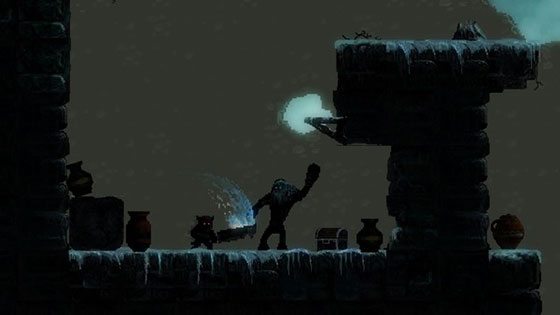 The animation is well done, and you can see motion blur with the sword slashes and some of the enemies attacks. The magic also looks pretty smooth, and you can see how the fire does have its own light source and its shine affects other elements. Ice also has a nice tranparency effect that lets you see the frozen monster traped inside the cold block, and when it breaks to pieces is looks pretty cool. The background has a clearer tone, and you can see many elements in a gray-ish palette. In later levels you’ll see lighting condictions change, and the foreground will be more detailed and not just black shapes.

Mahluk Dark Demon has 15 unique levels, 3 bosses, 4 different weapons to use, lots of items to collect and enemies to find. The level design is prety well done and while it may seem a little simple compared to an old school 2D console adventure, it has the perfect content for a mobile game. 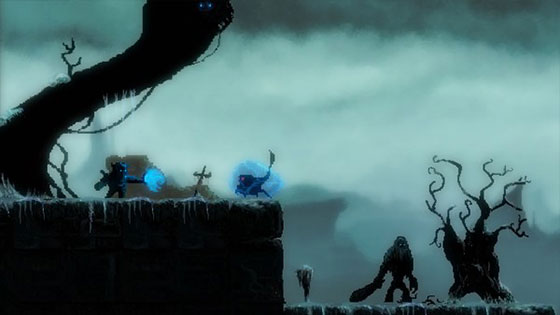 While your quest starts a little slow in the first level while your learning what your capable of, pretty soon you’ll be facing platform challenges, puzzles to open doors and pretty strong enemies. Good thing that you can buy more powerful equipment and level up as you go. It’s worth mentioning the game story, which is told by images like a Dark Fantasy graphic novel. The story itself it’s actually not very original, and if you follow the genre you probably have heard something similar a thousand times, but still it’s a welcomed adition to have an actual script here.

Value for your Money 98%

Mahluk Dark Demon is free on Google Play (with advertisement) and just 99 cents on the Apple App Store. The price is just right for the ads-free experience, and taking in consideration that the PC version on Steam is worth $2, you can get the mobile version for half the price.

Mahluk Dark Demon is a recommended choice if you’re looking for a new 2D sidescroller with an eerie theme. If you don’t really enjoy black shapes games, just have in mind that here you’ll actually see colors, and the graphics are more detailed that your average silhouette game. It may not be a great epic adventure like a Castlevania entry, but for less than a dollar, is totally worth it. Pros Cons