Dead Trigger 2 by MadFinger game is an excellent First Person Shooter created exclusively for Mobiles, where you play the part of a human survivor fighting his way against the infected in a zombie apocalypse. It features great graphics and perfect motion controls.

Dead Trigger 2 is a First Person Shooter, and as one of the human survivors, you have a variety of missions to accomplish in order to eliminate de Zombie Menace and save the world. The game controls pretty well. You have a virtual joystick you control with your left thumb, and you look around/aim dragging your finger across the right part of the screen. 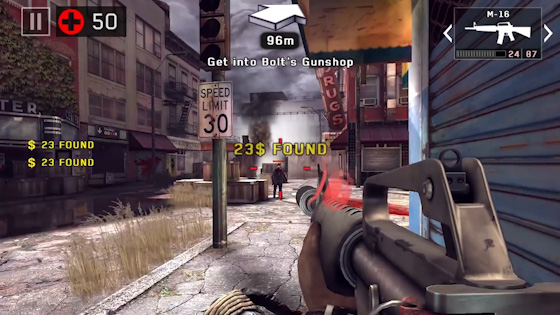 The great thing about how you control your charater, is that unlike many games, the virtual joystick doesn’t have static place, it appears where you first place your thumb, and then you move it to have the character walk around. This is perfect for going in a neutral possition and you’ll never have a problem with this. Exploring the levels, escaping dangers and facing enemies works great thanks to the easy controls. The shooting takes place automatically, just aim at a zombie, and you’ll shoot, but you have to take into consideration the range of your weapon. If the enemy is far away, you won’t shoot the handgun until you get closer, but if you have a rifle, you can shoot from a greater distance. You can also use blunt weapons such as a wrench for close combat, and once you find the engineer, he can make granades and other explosive weapons for you. At the beginning of the game, you’ll have a ‘Escape Mission’, where you only need to go from Point A to Point B. Once you find the exit, the level is over. Then you have a ‘Rescue Mission’, where you need to find a survivor and scort him back to your base. There’s also a ‘Sniper Level’, which works out pretty different. You’re guarding the entrance to the base from zombies, and you’re given a rifle to eliminate all threats. You start in the common First Person view, and tap an icon to go into ‘Sniper Mode’, and then tap again to shoot. The interesting thing here, is that you go into Matrix Style ‘Bullet Time’, and you can control the bullet with your right thumb once it shoots. There are also ‘Survival Missions’ where you need to stand your ground in a certain place for a given time, like inside a building, and zombies are coming in from the windows. Here you can go put barriers on the windows, which may hold for a while. Since they take damage from attacks, you have to go and repair them after a while. Finally there are Helicopter Missions, where you’re in control of a mini-gun and must eliminate all targets, just keep in mind that your weapon gets overheated if you shoot continuously for a while, so it’s better to attack in short burst.

Dead Trigger 2 features great looking 3D models and enviroments for a mobile game. It came out in 2013, but looks great even by today’s standards. It is on par with an average looking 128-bit console game that game, with lighting effects, day and night missions, great looking shooting sparks and explosions/fire animations. 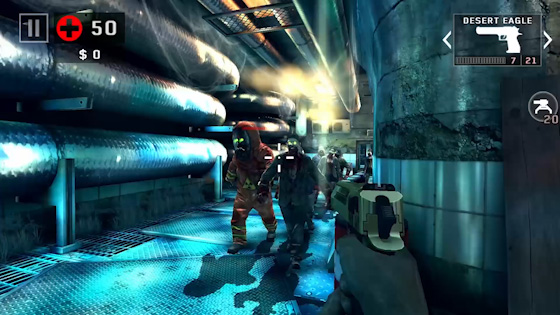 The weapons look pretty realistic, characters are expresive and nicely animated, and the zombies can lose limbs and get all kind of changes depending on how and where you attack them. There are also giant ‘Titan Zombies’ that are just massive, and look really good even up close. You visit a variety of places such as streets of a post-apocalypse city, a base on the desert, laboratories and inside a variety of other buildings. Missions take place all over the world, and every country has a distinctive look and feel to it. The menus are also really taken care of, they give the impression of ‘BioHazard’ movies, with High-Tech Laboratory Computer look, or maybe a military approach when you’re browsing for new weapons and such. Even if it has aged a bit, MadFinger games made a very appealing game that still holds up against new 3D titles coming out now.

Overall Dead Trigger 2 is a fun FPS created from the ground up for Mobiles, and it shows. Perfect Controls, and a veriety of short missions to play on the go make for one of the best shooters available now for phones & tablets. 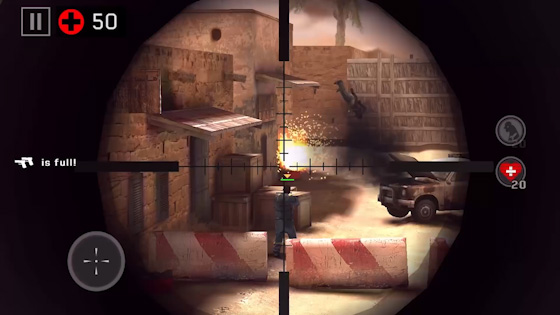 There’s so much variety on the game, even if you’re just basically blasting zombies all the time, you’ll never get bored since Missions are very different from each other, and take place in many different enviroments. Also, there are tons of weapons to get, and you can upgrade them a few times, if you have enough money. The game also has a story, and while it may be the typical ‘Zombi Apocalypse’ Movie script we’ve seen time and time again ever since Dawn of the Dead came out, it’s a nice detail that there’s a whole universe made up for the game. It’s also worth mentioning the great voice acting, that really brings out the personality of each character.

Dead Trigger 2 is free to download on Google Play and the App Store. It does have an in-game store where you can buy weapons and items with real money, it is not necessary to enjoy the game. But it should be said that zombies get stronger and stronger as time passes by, so the weapons you collect by just playing may not be enough to easily beat the missions, without expending a little on in-App transactions, the game may get a little too difficult after an hour or so.

Dead trigger 2 is one of the best First Person Shooters you can download right now on your mobile device. It has tons of content and the variety of missions should keep you entertained for quite a while. It is a big file, so free up some space on your phone to get this zombie-blasting game right now. Pros Cons