TRAP DA GANG is an action puzzle game in which you use items to lure and repel gangs that tries to take over your headquarter located on the left side of the screen. Guide the gangs to the traps by using your high IQ brain and the very old but very effective weapon “Ladder”

Trap Da Gang is an Arcade Defense game where you have to stop bad guys coming from the right of the screen from getting to the left side. Along the way there will be traps appearing such as bombs and electric devices that take out anyone that passes on them. Your objective is to make the enemies touch traps by placing ladders, trampolines, boxing gloves inside a Jack in the Box and more cartoony weapons and items. 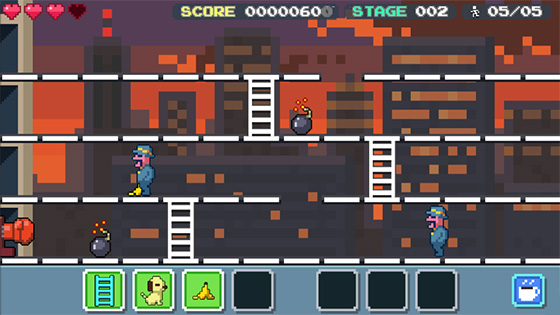 In the lower part of the screen you have icons such as the dog, which barks at people and make them run the other way, and the banana peel, which makes a person fall to the lower floor. You touch the icon you want, and you’ll have the item with you, drag your finger where you want to place the object, and then release it. The icon will have a timer letting you know when you can use that item again. Most bad guys just walk forward, so you can predict the way they’ll go and make them run into a trap by placing ladders and such. You don’t place traps, they just appear in the level as a silhouette with a timer, and after 5 seconds they’ll become active. The black bomb explodes taking out 1 person, the dynamite has a wider blast radious so it can take out more bad guys, and there’s an electric device that can affect people on an upper and lower floor. As you advance through the game, you’ll have access to more powerful items. For example, the puppy can only be used once, and if it doesn’t bark for a while, it disappears, while a big guard dog stays for a long time and can bark to more enemies before disappearing. If an enemy gets to the left side of the screen, you lose a heart. If you lose all 4, game over, and you have to start over. You win the level once all enemies are taken care of. You can see how many are left in the upper right corner of the screen. At first you only see regular men in suits walking, then fast ninjas running will appear, and later on some enemies will be carrying ladders for their own use, or you’ll see bad guys on cars and robots, who can take multiple hits. Overall it plays like a tower defense game, but with a retro arcade feel, and a cartoony sense of humor. It can get pretty tough in later levels and has enough veriety in characters and items to entertain you for some time.

Trap Da Gang features 8-Bit pixel art for an old school 80’s videogame look, but it’s wider and has more colors than a NES game. The style and animation is OK, but it may be a little too “blocky” for the taste of some people. 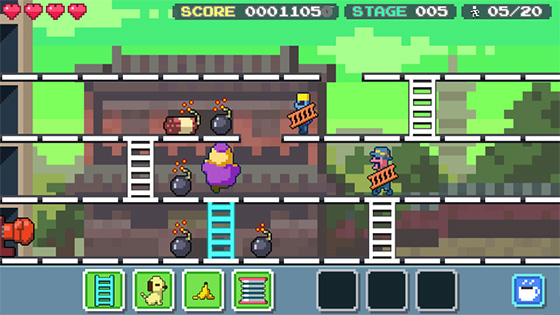 You’ll have no trouble distinguishing the items and type of characters in the screen, but the backgrounds could have used a little more detail. You can actually make out a city back there, but sometimes it seems to be just a pixelated mess. In the foreground, you always see the white floors and ladders that are part of the stage, and while they look simple, this design just fits the game.

Trap Da Gang is a nice spin on the tower defense genre. It truly feels like an arcade game you’d play in 1985. The characters have personality even though they’re low res sprites, and there’s enough action and elements interacting in the screen to keep your attention for more than a few stages. 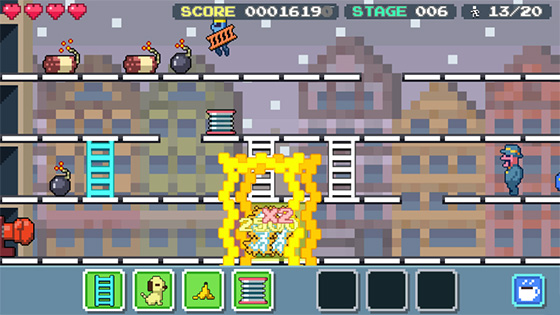 To complement the retro graphics, the music is 8-Bit chiptune soundtrack, and the sound effects and voice samples have the style of an old Nintendo Console, but higher quality for a cleaner output. While the gameplay is pretty simple touch controls, and you only take and place traps here and there, when you start getting lots of enemies at the same time, things will get pretty interesting, and there’s enough variety to make this game an interesting option even for players that not enjoy this kind of strategy titles much. It’s definetely recommended for fans of old coin-op games.

Trap Da Gang is free on Google Play and the App Store, and there is an optional advertising that works in an interesting style. The clown character carries an item, and when he falls into a trap, you can choose to watch a video ad to get said item, like a fire hydrant that sends the bad guys in a floor sliding on a water slide the other way. You can also buy gems to be able to continue the game when you lose. Not really necessary to enjoy the full gameplay experience, but you may consider getting extra lives by level 10.

Trap Da Gang is a pretty fun Arcade experience, and it’s perfect for retro gamers. Casual players fond of Tower Defense title will also enjoy its style, and while the blocky visual style may not appeal to everyone, it gets the job done. With easy touch controls and catchy chiptune music, it’s a recommended game to download and play for some levels. So go trap those bad guys. Pros Cons