Power Hover is an action game about hoverboarding robots! Navigate your way through the desolate world, avoid the hazards and collect the energy! Unfold the story of odd and desolate robot-world…

Power Hover is game about a robot collecting batteries and avoiding dangers in a futuristic desolated world. You’re on a hoverboard that advances automatically, and you just have to touch the right or left half of the screen to move to the sides, and let go your finger to go forward. 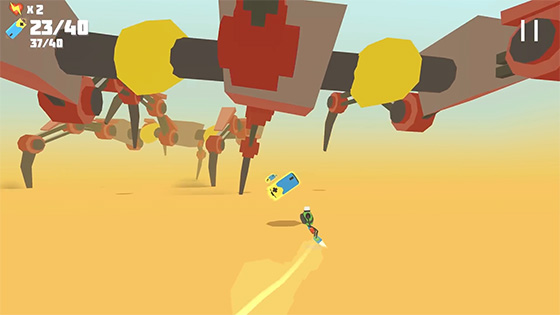 You start out with 2 lives, but you can collect more in the game, getting a heart icon. You lose a life when you crash into an obstacle. Every level has 3 checkpoints, and after you pass one, if you bump into something, you go back at the checkpoint. Lose all lives, and you have to start over the whole level. The batteries you collect give you a Star Ranking at the end. When you reach the end goal, you’re rated depending on your fasted speed and number of batteries, and you get credits according to your final score. With credits you can buy more lives to start out, a backup disc drive that let’s you continue after you lose them all, a magnet to attract nearby batteriesn and some other perks. The game will begin in huge fields and you just gonna have to avoid the occasional rock. After a while you’ll find yourself in half pipes or circular tunnels and you can move to the walls or even be completely upside down. You’ll also find some tubes that you can use for sliding over them skateboarding style. When you’re on them, just tap left or right on the screen to jump to the sides. In most levels, you just have to reach the end goal, but there are boss levels that are endless and random generated, and it’s all about surviving a certain distance. There aren’t any checkpoints and everytime you play obstacles appear in a different order, so you can’t memorize the level. Sometimes you’ll be following another robot that drops batteries, but also bombs that hurt you, so be careful about following its exact same path.

Power Hover features 3D graphics that don’t use much textures, and overall seem to be a little flat, but its artistic design and color selection makes for something interesting to look at, and you can notice that the backgrounds have some gradient colors and special particle effects such as dust, clouds, and water spraying. 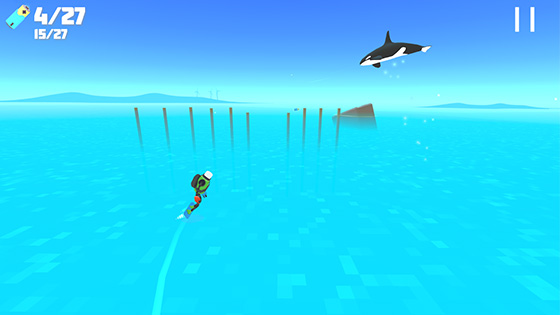 The robot you control behaves like a pro skater, you can see how he shifts its body according to your actions, and when you jump, sometimes you’ll see some cool skateboarding tricks. There aren’t many elements in the scenarios, since overall it’s a pretty disolate futuristic world, but there are a few surprises like an orca jumping from the water in the ocean level, or giant worms appearing from underground in the desert. And when you enter the city, there will be bombs, electrical obstacles, huge robots and much more to see. Power Hover may not look impressive, with a high polygon count, it wants to look memorable by giving a unique aesthetic to this robotic game univese.

Power Hover features 35 levels with a variety of sceneries, and each has very different obstacles to overcome; plus the boss fights that are random generated, and a challenge mode for 2-players. 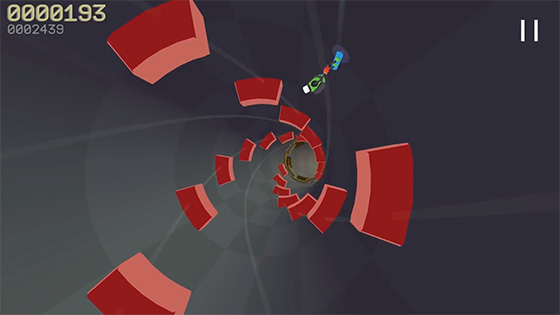 You can power up your robot by earning credits when you beat a level, and if you don’t reach the 3 star rank, you may go back to play again a previously completed level, so there’s some replay value; but since you basically just go left and right, and can’t really slow down or speed up, gameplay wise the game is a little lacking. Power Hover isn’t exactly a racing game, or a skill based skateboarding title, it’s just about avoiding obstacles, and that may not be enough to get the attention of players that want a deeper experience; but for those that enjoy infinite runners and similar titles, the dozens of level here should be enough to keep them entertained a couple of hours.

Value for your Money 83%

Powr Hover is free on Google Play, and show ads, but the Apple App Store version is available for $3.99, which is expensive compared to similar mobile games. It’s a well done game, but 3 dollars would’ve been a more reasonable price. Still, there’s a PC port you can get for $7.99, so the iOS version is at least half as much.

Power Hover is not really a racing game, you don’t control your speed, or a skateboarding title, there are tricks to do, but you don’t have much control over them; it’s just about avoiding obstacles going left and right. It may be entertaining for casual players that like similar titles, but for the price, you may think twice before making the purchase. Try out the Google Play version and decide for yourself.