Dulp by Nexxon Studio is a game where you shoot spinning bars with balls of the same color. Sound simple? Focus and wait for the right moment. Challenge yourself in hundreds of unique levels & mechanism in this arcade puzzle game.

In Dulp your objective is to shoot colored balls in the bottom of the screen to round bars that are spinning around a white circle. Just tap on the screen to shoot, if you hit the bar witht the same color as your ball, they both disappear, and then you can shoot the next ball. If you miss, you have to start over. But in endless mode, you have 3 chances on each stage. 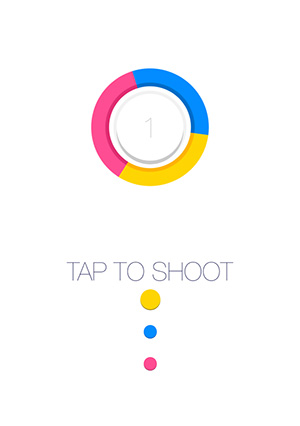 In the first levels, the bars you have to hit will be spinning in clockwise at a constant speed. Later on they can change direction every few seconds, or spin 90 degrees, stop a couple of seconds, and then repeat. It becomes quite har to predict the right time to shoot. Another challenge, is that you’ll have many layers of bars to shoot around the white level circle, and you have to shoot quickly with perfect timing when the objective is a short bar in the first layer and there’s another colored bar going over it, just leaving a tiny room for your ball to pass every 5 seconds or so. The most difficult feat, is the invisible bar, where you’ll see the bar to shoot for a second, it’ll disappear from sight, and then become visible again for a short while, and you have to guess where it’ll be when you shoot. Most of the time, you’ll have to shoot at it while it’s invisible, hoping that you’re right about it’s position. There are hundreds levels, and you can play them one by one, with increasing difficulty, or play endless, where you play them at a random order, and have 3 lives to see how far you get.

Dulp features simple 2D graphics, you just see the white circle with the level number, the bars around it spinning and the circles to shoot over a white background. 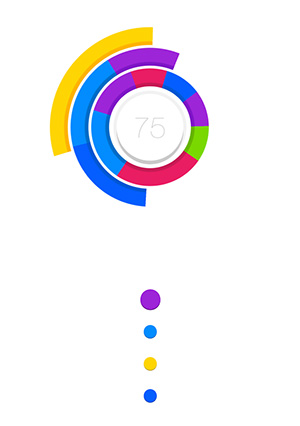 This minimalistic approach wortks just fine for the gameplay, and the elements here have a little shading on the edges, so they’re not completely flat colors. It would’ve been nice to have different backgrounds, like gradient colors or something, but as it is, most people won’t complain, being too busy trying to beat one more stage.

Dulp features 350 levels, each one with a unique challenge. And if you’re having a hard time, you can buy “skips” so you can go to the next level and go back when you feel ready. 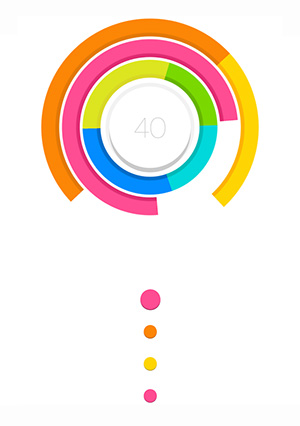 There’s also Color Blind mode, that features shades of blue and gray, for people that otherwise wouldn’t be able to enjoy the game as it was meant to be played. Besides, the game is translated to 9 languages, making it quite accesible for players everywhere.

Dulp is free on Google Play and the Apple App Store. You’ll see an ad after losing about 5 times in a row or so, and that’s to be expected from this kind of games. You can buy 4 “skips” so you can go to the next level right away for 25 cents, or buy 25 for a dollar. If you’re a good player, you won’t need them, but consider them if you want to support the developers, and just can’t seem to beat a certain stage.

The gameplay and presentation of Dulp is pretty simple, but it’s game mechanics can get quite addictive, and you’ll be so focused on winning a level that you won’t mind if the graphics and animation could be better. While it’s similar to Color Switch, it feels different once you get into the later levels, and it’s a good choice if you enjoy one-tap shoot puzzle arcade games. Pros Cons