in Magic Touch: Wizard for Hire you use you finger to draw shapes on the touchscreen. Match the shapes on balloons to pop them, sending Knights smashing to the ground. Keep the Enemy from reaching the castle for as long as possible!

Magic Touch: Wizard for Hire has you in the rol of a spell user defending the top of a castle from knights falling down on balloons. Each balloon has a shape on it, and you must draw it in the screen with your finger to pop it, so the knight falls down at high speed and crash on landing. Some of them have many balloons to pop, and there are Dark Knights with more complex shapes. 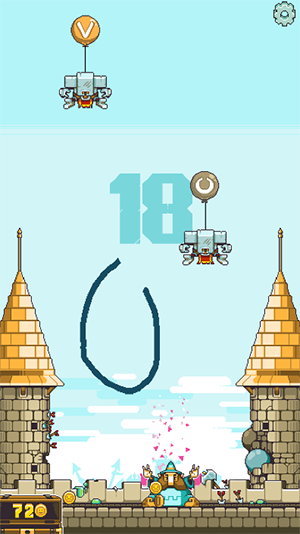 When knights fall down, they’ll drop coins that you can later use to buy new characters, backgrounds and spells, which come floating attached to a balloon from the side of the screen, and have unique shapes such as a spiral. Once a spell is activated, it will unleasha special effect such as slowing down time, or summoning a thunder that pops all balloons. As time goes by, more enemies will appear at the same time, and stronger knights with more balloons will make an entrance. They’ll also start falling down at a higher speed and have more variety in shapes. When you make a drawing, every balloon on the screen with that shape will pop, and you get a Combo when that happens and you drop 2 or more knights. There are also Treasure Chests that have a single balloon making them float, but when you pop it, it’ll change its shape. Once you pop them all it will drop lots of coins. Finally, there are item bags marked with a “?” that drop a spell and store it in the lower right corner of the screen with a unique shape, so you can activate it by drawing that pattern whenever you want. Besides the Classic Arcade Mode, there’s Time Attack where you have one minute to pop as much balloons as you can, Zen Mode that’s always the same speed and doesn’t have complex shapes to draw, and Insane, which is a very challenging mode for experienced players.

Magic Touch features the 2D pixel art style that Nitrome is known for. All elements on the screen are colorful and have a funny cartoony look, and the character animation is great, from how the knights move when falling down, to how they explode on contact next to you dropping lots of golden coins. 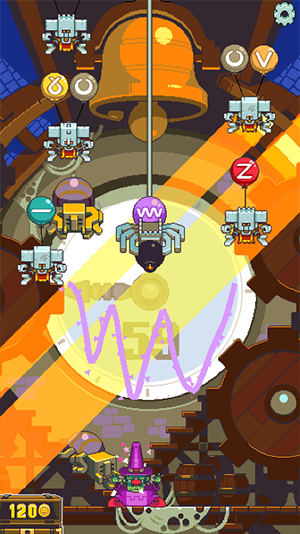 The characters you can choose walk and move around their hands letting go some transparency effects when they do spells, and while they’re not very expressive, the enemies react to your actions and you can see how they get scared when you pop their balloons and details like that. When you draw on the screen you’ll see a line forming, and the screen changes color for a bit when you activate spells such as Slow Time. There are some moving backgrounds such as the clock tower, and sometimes you see other moving characters such as cats and birds in Stage 2. Overall it’s a great example of well done pixel animation, very enjoyable to look at, and you may find yourself going for another play only to unlock one more stage.

Magic Touch is an endless arcade that has the feeling of an original Nintendo DS title, the drawing gameplay works great and you’ll rarely feel like you did draw the correct shape and it didn’t register. It’s a fun concept not used much, and while it is comfortable to draw lines with a stylus, it’s still lots of fun to make the shapes with your index finger. 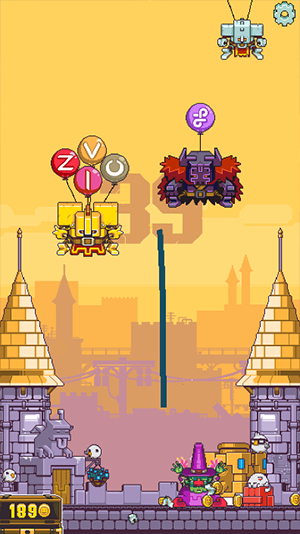 There’s a lot of content to discover, but since the game is based around beating your own score over and over again, it may lose it’s appeal after an hour or so. Still, it may take a while to unlock all the content the game offers and get a good record of hundreds of points. While it would’ve been nice to have individual levels and challenges, the different game modes and elements to unlock will keep you entertained at least until your finger gets tired.

Magic Touch: Wizard for Hire is free on Google Play and the Appel App Store, but you’ll see some advertising when you lose. You can get the Ad-Free version for $3.00, and while the game is pretty fun and certainly on the levels of paid apps, maybe a couple of dollars would’ve been a more reasonable price. It is not necessary to buy the full version to enjoy everything the game has to offer, but if you play for hours and wish to support Nitrome, go ahead.

Magic Touch features a drawing lines gameplay mechanic not often seen since times of the original Nintendo DS back in 2005, and it’s a great option if you’re tired of infinite runners and match-3 puzzles. Addictive Arcade action along with great pixel art animation and chiptune music make for a recommended app, and you should try it right now if you want something more than one-tap and switching blocks apps. Pros Cons