Draw vertical and horizontal lines to split the balls into smaller spaces. Once the balls are contained, you get to move on to the next level.

Split is a game about drawing lines on the screen, in order to contain white balls in tiny squares. Just swipe with a vertical or horizontal motion, and the line will begin drawing. You don’t need to move your finger the whole way, just to get your motion detected by the touch screen. 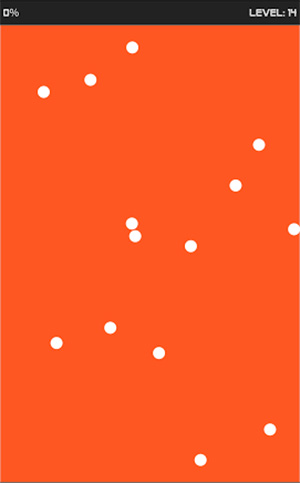 If the line being drawn touches a ball, you’ll lose the level. Once the line finishes drawing, the parts containing white circles will become squares, and the balls wil bounce on the edges of their containers. You need to keep drawing lines to contain the circles in smaller squares, until the completion percentage counter on the top left part of the screen gets to 100% You’ll start out just having to contain a couple of balls, but as you advance, there will be many to take care of, so having just the right timing is a must. At first you’re maybe able to contain all the balls in just a square, and make it smaller little by little; but later on, you’ll have to divide the screen so each square has a number of balls you can deal with. The overall objective is just to advance to the next level by reaching 100% on level completion. There isn’t a score or time limit, you just go to the next level and repeat.

Split visual style is way too simple, and the color selection seems weird, you just see white circles or the same size moving around over an orange background. 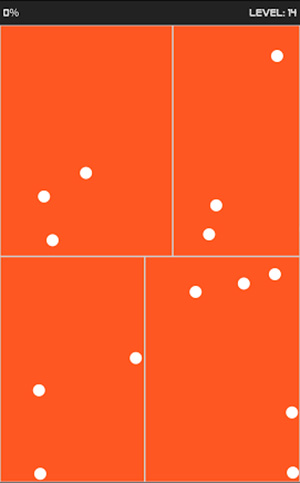 Besides lines being drawn and circles bouncing at a constant speed, there’s not more animation going on. Similar games like 90 Degrees feature balls with different sizes and designs, and more colors for backgrounds, menus and other game elements. As it is now, Split is a little hard on the eyes to see, and just by looking at it you may skip it while browsing games and look for something a little more appealing.

The casual gameplay of Split is OK to pass some time. You may even reach Level 20 given it’s simple controls and how challenging it gets after playing for a while. But you’ll probably leave it at that point. 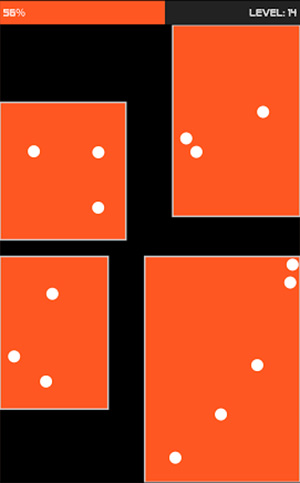 There is no music or sound effects. As nothing has been done in the audio department, and the visuals are way too simple, this title has only its gameplay to keep you entertained; and given the lack of extra stuff to do, it’s not the kind of game you’d want to keep installed on your phone.

Value for your Money 59%

Split is free on Google Play, but you’ll see a banner ad or a video ad that’s skippable after 5 seconds every time you lose, which may be pretty often after level 10. There’s an ad-free version available for a dollar, but since there are games with that value that offer so much more content, this is not a recommended purchase.

Split is a very simple game meant to be played by casual users for a few minutes, and it just may keep you busy until you reach level 10 or so. The game is completely mute, and the minimalistic graphics are just too simple to keep your interest. If you’re interested in trying out the base gameplay, which is interesting by itself, you better check out 90 Degrees or other similar apps. Pros Cons