Rust Bucket by Nitrome is a turn based dungeon crawler that is built with mobile in mind. Swipe to take a step, swipe into enemies to attack. Game play is fast and death is never far away so it’s perfect for your daily commute. Many enemy types each with their own distinctive rule set to overcome.

Rust Bucket is a dungeon crawler top-view puzzle adventure where you take control of a tiny knight that must find the exit in each floor. Swipe left, right, up or down on the screen to move one space. And if you swipe and keep your finger on the screen, the knight will keep moving in that direction. 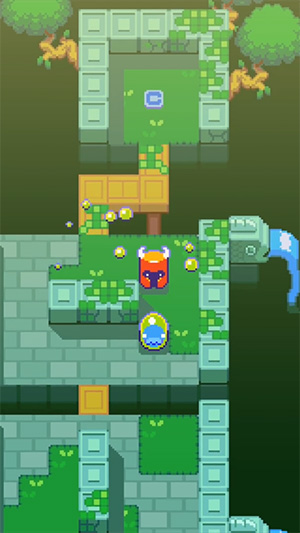 When you’re next to an enemy or clay pot, swipping your finger in its direction will make the knight attack with a sword slash. Enemies move by turns. They only advance one space at a time after you make your move. They can be monster jellies, which turn red when they’re about to attack, flying giant skulls which can attack without a warning, humanoid pigs which actually need to spend a turn when turning around, and there’s a giant centipede which follows you around, and each section of its body can turn into a head if you slash it, so if you want to defeat it you need to destroy the whole body. When you’re next to a movable object like a stone block, you’ll push it, and you’ll have to do this often to press switches on the floor. Some switches need to be activated once. They’re red, and turn green when you step on them. And other switches need to have something on them all the time to keep active their effect. There are stone pig enemies that don’t attack, but push you around, and in some levels you need to lure them into pressing switches for you. Overall, Rust Bucket is more of a puzzle exploration/adventure game, like a simple version of a Zelda dungeon. The objective of the game is to explore each level until you find the stairs to the upper floor. Every few rooms you’ll find a “C” switch, which is a checkpoint, so you go back there when you lose a life or get stuck. There is no time limit, and it’s not necessary to kill all enemies, but sometimes you need to in order to open a door or something.

Rust Bucket features 2D Pixel Art graphics, which are the developer Nitrome’s Specialty. The characters are pretty colorful and have simple yet nice animation. The rooms are pretty detailed and you can see vegetation, fountains and other stuff for variety. 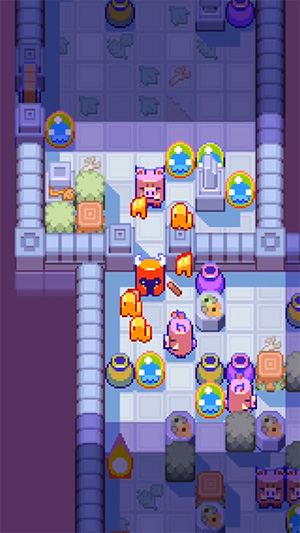 The rooms are usually over a blank background, but you only notice when going to the borders of each floor, and it’s nothing to complain about, since you’ll be focusing in all the action. Sometimes you’ll enter dark areas, and you’ll have light surrounding you, which will get dimmer as it gets further away from the knight. It’s a pretty cool detail and it gives a good feeling of mistery, you never know what you’ll find next. When you attack an enemy, you can see it exploding into tiny pieces, and even if the characters are tiny, you can see they have facial expressions, like the jellies look angry when they’re about to attack, and the pigs open their eyes in surprise when you’re about to hit them. Also, the knight looks sad when you lose.

Rust Bucket starts pretty simple, with just a few enemies on each floor, and a simple puzzle to solve, like breaking the right pot to show a switch underneath and just step on it once; but as you go on, the challenges get tougher, and you’ll have to really plan you’re strategy to face off lots of enemies and come up to ideas to open doors and tricking other characters into activating switches for you. 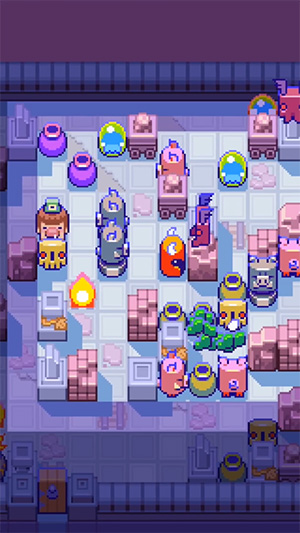 The level design is always innovating, so you never feel like you’re solving the exact same puzzle. At first you step on switches, then you put blocks on them, then make enemies step on them, then there are teleport chambers you need to enter and activate switches in several tiny rooms in order to open a big door… Once you feel like you’re getting the hang of the game, it throws a new feature at you to change the way you play, keeping the gameplay fresh. The overall setting of the floors changes after a few levels, and so does the music, so it really feels like a well produced dungeon crawler; but without leveling up and tons of items to collect.

Rust Bucket is free on Google Play and the Apple App Store. The game doesn’t have in-app transactions for boosters or special items, it just generates revenues with the occasional ad, but it’s really not intrusive at all, you’ll only see it after losing several times. You can upgrade to the ad-free version if you’d like to support the developer for a dolar, which is pretty reasonable.

Rust Bucket is a nice puzzle adventure with simple control and challenging levels that always makes you come up with a unique strategy to find the exit of each floor. It can get pretty addictive and it’s perfect for fans of Zelda and other old school dungeon crawlers, just remember that its made to beat mental trials, and it’s not about collecting items or battling monsters, so it may not be a good choice for the casual player. Pros Cons