Threes! by Sirvo LLC is a simpleyet addictive puzzle game where you add up cards with the same number until you run out of spaces in a grid. This is tiny puzzle that grows on you, you may come back to try and beat your record for hours without realizing it.

Threes! is a casual puzzle game where you swipe numbered cards in a grid to ad them up. You start out with a few cards on a grid, and can swipe the screen left, right, up or down, moving all the cards in the grid at the same time. If you have 2 cards of the same number against a wall, and swipe to make them come together, they’ll become a single cards with the added number. Two number 6 make a 12, two number 12 make a 24 and so on. 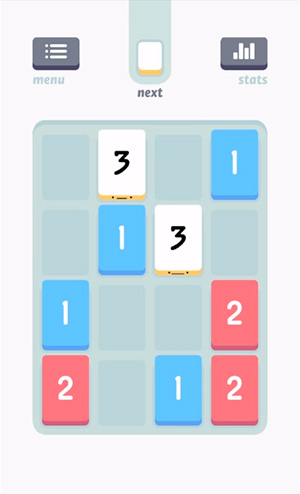 The only exception to the “same number add” rule, are number 1 and 2, which only add together, but you can’t mix them together. So neighter 1+1 or 2+2 is posible, you have to add 1+2 to make a 3, and they can be added with another 3 and so on. Each time you make a swipe, a new random numbered card will appear in the grid. If you don’t add numbers fast enough and run out of room for a new card to appear, you’ll lose the play. When that happens, every card in the grid will give you points depending on its number, and the total of all cards added up will be your score. You’re able to write your name to appear in the game’s global leaderboards.

Threes! has a minimalistic visual style with soft colors, to help relax the mind. At the beginning, you’ll only see blue and red cards, and when you mix them, white 3 cards with a tiny cartoon face will appear. 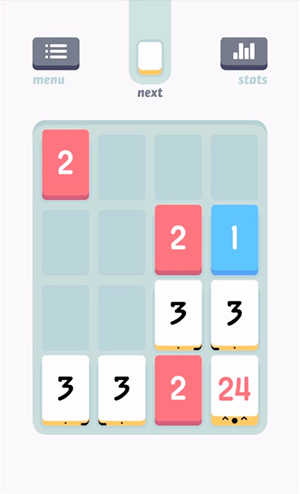 As you add up numbers, you’ll notice that the high value cards have different expressions, and even accesorios. Like numbers over 100 can feature hats or headphones, making them stand out among lower cards. The animation is simple, just some dragging to the sides, and a little bouncyness when you hit a wall; but the fusion of two cards looks nice, with the lines that make the face moving around to form the new one. Besides the bright default look, there’s the option to activate “night colors”, where you’ll see everything with shades of gray over a black background. It’s a nice choice for long hours of playing, since you’ll probably become less tired of looking at the screen with dark colors.

The gameplay formula of Threes! has been used in other games like Letter Monsters, is simple to learn, but hard to master, and it can certainly get pretty addictive. You won’t notice when you’ve been playing for about 2 hours straight. 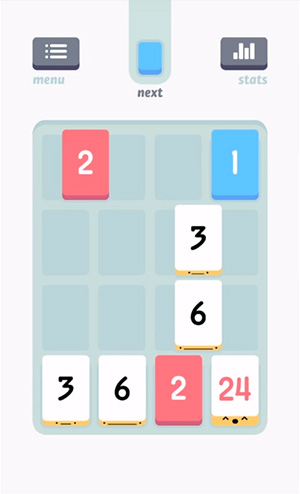 The cards have different voices according to its number, and the soundtrack is very calming, perfect for playing a puzzle for a long time. There are also some achievements like beating the tutorial, getting a card with value over 100 and getting over 1,000 points in a single game. While there really isn’t much besides the core gameplay, Threes! is the kind of game that makes you come back to try and beat your record one more time.

Threes! is available for $2.99 on Google Play and the Apple App Store. Similar games are worth a dollar or two, so you may think twice about buying an app for this much, but there’s a free Android version that you can try out and then decide for yourself.

Threes is a simple but addictive puzzle game with a soft and cutesy graphic style that features a challenging mind game perfect for fans of this type of games. While the paid game may be a little expensive for most players, you should try for yourself the free version and spend a few minutes on it. If your play time becomes hours without you realizing it, then you may consider paying the full price. Pros Cons