Drift every turn in this infinite track in order to break records and unlock dozens of cars! Will you be able to complete all the challenges in this fast action sling drift arcade game?

Sling Drift is a simple arcade driving game similar in gameplay to the top-view car game “Turn Right”, with the difference that here you’re on an endless race track and you can turn left, right, make a U turn or even a 270 degrees turn. 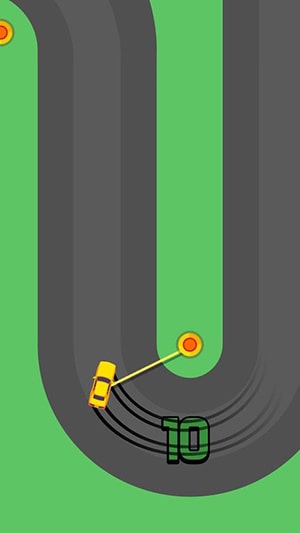 At the beginning, the car accelerates automatically until it gets a constant speed, and the only thing you do is tap on the screen to launch a hook shot to the orange circles, and keep pressing the screen in order to turn, release your thumb from the screen to let go, and the car will try to align with the track to keep going. It’s all about the right timing. If you drift while staying in the center lane, you’ll get a perfect turn, and if you make 3 in a row, you’ll enter “Fever Mode”, which makes the screen black & white, and the lines you leave behind when drifting get a sligt red hue. After a dozen or so turns, you’ll move to the next level in a turbo boost collecting diamonds on the track, and in the next section, the car will have a higher constant speed. After some other turns, you’ll move to the next level, which will also go at a faster pace. You lose when you hit the edge of the track. When you crash, you may get a second chance to keep going after watching an ad, but you can decide to start over. With the diamonds you collect you can buy new cars, and there are also challenges that give you 100 diamonds if you complete them.

Sling Drift features 2D hand-drawn graphics seem pretty simple at first sight, but there are a few effects like fire and speed blur filters applied at times so it doesn’t look so plain. 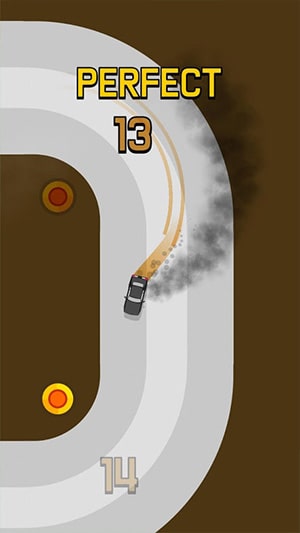 The first car you drive is pretty simple, just an average vehicle of a single color, but you can unlock cars with stripes, lines, logos, drawings, and some that have glowing neon lights, and others that leave behind a special trail of something like heart icons, and not just dust and smoke. It’s also fun to look at the explosions of your automobile when you crash, since it look like a Mega Man X Robot Master when you beat it. The backgrounds could be a lot better, since they’re a single color without gradient tones or anything, and the track is dark gray with just a slightly clearer tone at the center lane, and when you move to another section, the background just changes color, like from green to orange and then blue, without a pattern or details like a fence made up of tires or anything you’d expect from a racing game.

Sling Drift is an endless random track, which in itself is addictive enough to play, but there are plenty of challenges that make it more fun to play since you can focus on doing something else besides just breaking your previous record. 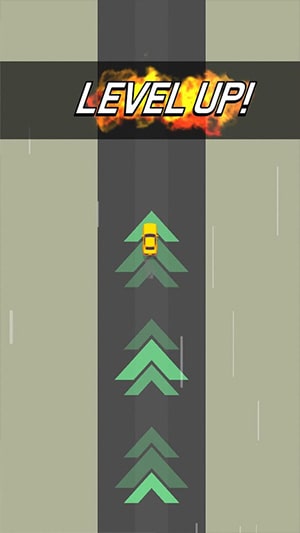 There are plenty of cars to unlock, and the achievements such as “Make 5 Perfect Turns in a Row”, “Get exactly 30 Points” or “Enter Fever Mode 3 Times” add a new level of excitement to the game. You also get a daily reward for playing, so you’d probably want to log in and go for a few turns every other day.

Sling Drift is free on Google Play and the Apple App Store, and unfortunately video ads show up a little too often, and there’s always a banner in the bottom of the screen. And instead of a premium version you can buy, it’s actually a Weekly Subscription for $5.99. That’s much more than a Console Online subscription that gives you free AAA games costs.

There are game with gameplay mechanics similar to Sling Drift, but the cars move by themselves, and strangely, using a rope to turn around can get pretty addictive and it’s something that hasn’t been done before in such a way. Besides, the extra challenges are a good way to keep you busy if your record seems to be to high to break, and you can even skip achievements by paying diamonds if the test seems to be to hard for you. Check it out if you liked “Turn Right” Pros Cons