Abyss Attack by Chillingo will have you shooting at underwater cretures exploring the depts of the ocean. Get armed with the best Weapons and Special Items, and face off the dangers of the unexplored bottom of the sea.

Abyss Attack is an Arcade Shoot ’em Up like the classics from the 90’s. You control a powered submarine that shoots automatically, to move it, you touch the screen and slide your finger where you want it to be. Your objective is to avoid or destroy underwater monsters, collect gems and relics, and defeat the Boss at the end of each stage. 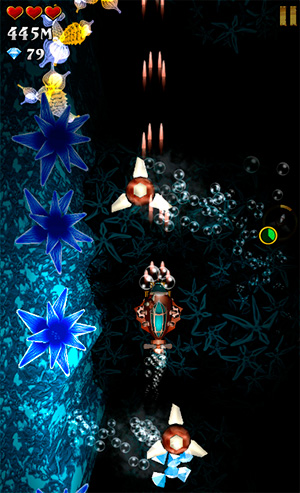 In the levels you can get new Weapons or Power Ups that last a limited time and can help you in your mission. You can get a Super Bullet, that makes your shots bigger and increase damage, a Shield to protect you from attacks, a poweful Laser Beam, a couple of Spinning Blade weapons that rotate around you protecting and attacking at the same time, Bombs that affect a great area with their powerful blast, and more. With the Gems you collect, you can buy upgrades for your submarine, like more powerful guns, or items such as the Special Weapons. If you collect a Special Item in Level, you use it immediately, if you buy it and equip it before starting your mission, you can activate it anytime by pressing an Icon in the right side of the screen. Each time you use the Special Weapon, it needs to cool down for a while before being ready to use again. Abyss Attacks is an endless game, but the background scenery changes and after a while of shooting the same kind of enemies, a Giant Creature will appear, working as a Boss Fight, and then you’ll enter a new “Stage” and get on to a different setting and face off other monsters and dangers, such as lava boulders and stuff being thrown at you. You can take damage 3 times before you lose, and then, you can exchange Gems to continue, or you can choose to start over. In the Main Menu you can upgrade, buy items, or create Relics, which are artifacts that boost your Special Weapons stats, like increasing the time you last with the Shield on or how many Bombs you launch when you activate the Special Weapon.

Abyss Attack looks OK, but it’s too dark most of the time. The light and shadow effects look nice, but most of the time you’re looking at a mostly black screen, which may turn away players that enjoy a colorful SHMUP. 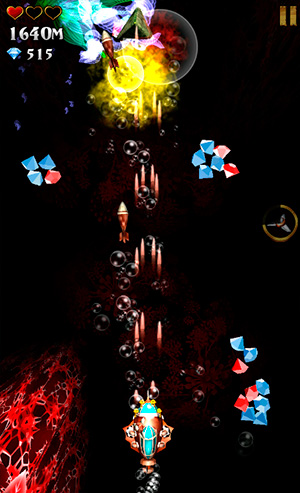 You can clearly see enemies and items, and there are many nice effects such as explosions and bubbles that come out of your submarine, but the background is lost in the darkness most of the time, and while the developers intention was to give the game an “Abyssal Zone” look, where the sunlight doesn’t reach, it gets boring just seeing darkness all the time. The sea creatures models have a nice look, they shine on their own, and your submarine emits light, so when you get close to elements in the scene, you can see coral reefs and vegetation; but it should be said that the submarine itself and weapons such as missiles, look kind of “plastic”, they need a more metallic texture and maybe some reflection effects to improve the visuals. Overall, the graphics are better than the average mobile shooter, but not on the level of some SHMUPs with better production value. It looks OK, just not a mind blowing visual experience.

Abyss Attack is your standard Mobile Shooter. You have and endless level to play, gain experience to improve or get new stuff, start the mission again, now easier since you’re stronger so you get a little further… You lose, repeat the formula. Once you get to the 3rd Boss fight or so, it gets kind of boring compared to the great SHMUPs of the 90’s. 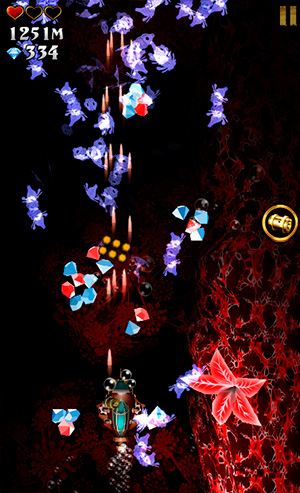 Maybe if it had a set of Stages and a Level Select, offering an “Endless Mode” as an option, like classic Arcade Shooters do, it would be better. But the way the game is made, you have to play the same starting stages over and over again, which gets old fast. Also, it seems to be designed so you spend real money upgrading your submarine to be able to see more of the adventure, and that may turn away the average player. You have many power ups, variety in soundtrack, nice light special effects and sound, but gameplay wise, it’s not the type of game that will have you hooked for more than half an hour.

Abyss Attack is free to download on Google Play and the App Store, but if you take a look at the in-game purchases, paying $5 for a set of gems it’s just way too much. It’s recommended for casual players that enjoy a good shooter, but improving your submarine through in-app transactions, may cost even more than buying a digital SHMUP collection like Raiden Legacy or R-Type Sun.

Abyss Attack is a good casual shooter made for mobile players in mind. It will get your entertained for a while, but after 4-5 plays, most user will look for something else. It’s a good SHMUP to try out, featuring everything you’d expect, but it’s just not a great title worth playing for hours. Pros Cons