Time you put a little Peter in your pocket! From the producers of the hit TV show, Family Guy: Another Freakin’ Mobile Game features your favorite characters and moments from all 15 seasons of Family Guy. Follow the Griffins on a debaucherous journey through Quahog.

Family Guy Another Freakin’ Mobile Game is a Match-3 Puzzle where you line up icons of alcoholic beverages to make them disappear and get characters drunk. As many games in the genre, you touch a beer blottle or glass of wine, and drag your finger left, right, up or down. If you line up at least 3 of the same, the match will be made and the cartoon character will drink them. 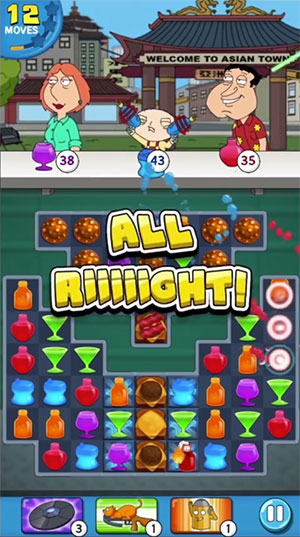 On top of the puzzle grid you can see how many drinks you have to give each character. You have a limited amount of moves to have them all drink that amount. Sometimes, after someone’s counter gets to zero and leaves, someone else will take the empty spot and you’ll have to keep going until no one else is left. Like many similar games, when you make a line with 4, you get a special explosive icon that when matched takes out a whole row or column. If you make a match-4 in a square shape, you create a molotov cocktail, that when used in a match, is thrown to some place in the grid to get rid of some other icon (usually the most needed one). If you make a 5 match in a way that you have 3 vertical and 3 horizontal icons lined up, you get a bomb with an X shape that explodes that way. Finally, if you make a line with 5 icons, you get a rainbow colored star, that you just need to switch places with a certain color to make all the icons of that color disappear from the grid. Besides special icons that you can move around, there are boosters in the bottom of the screen that you can activate any time. There’s a disc that takes out whatever it’s on any space you want, a bullet that eliminated any column, and a cat launcher that gets rid or the row you choose. In later levels, you’ll see obstacles you have to break by making matches next to them. They’ll start like a single toast, which gets eliminated with one match, but later it can get a cheese slice on it, and meat, bacon and so on, meaning that it will take several matches to make it disappear completely. Also, there are special chocolate puff that you can move by dragging them with your finger, but they do not make matches and are eliminated just like the toasts, but at least you can make them switch places.

Familiy Guy Another Freakin’ Mobile Game features only 2D animation for the gameplay part, and the cartoon art style for the cinematics and characters interacting with each other and the drinks you send them. This part looks great, but the gameplay side of the game, not so much. 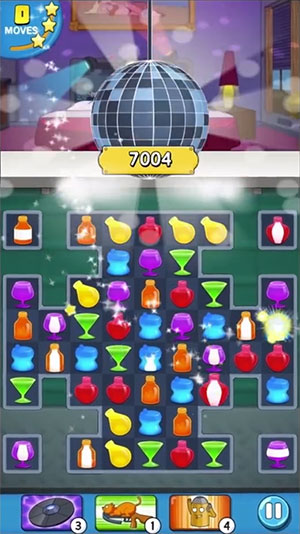 The grid and icons actually look pretty boring until there’s a match or you get a special icon, since the flames on molotov cocktails are animated, and the explosions are very nice visual effects. On the upper part of the screen, you can see the characters from the show that are animated just like in the cartoon. You can even notice how they get noticeably more affected by alcohol with each drink you send to them, and some guys like Stewie get desperate and have a special animation if you don’t make a match with their color in a long while. The genius baby shoots laser guns at the air and the talking dog looks around with a bored expression. As you advance through the levels and get to other parts of the neighborhood, and even get to downtown Quahog, you’ll see the background changing, and many classic characters from Family Guy will be featured as extras. They don’t move at all, but it’s a nice touch.

Family Guy is known for a certain type if humor, classic jokes and specific actions that every fan expect certain characters to perform in each episode. You’ll see all that here. 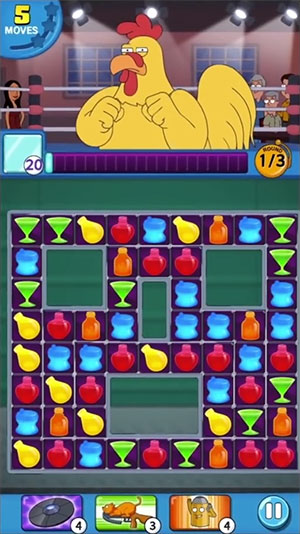 While playing, you’ll hear characters saying their classic catchphrases, and when you make big matches or perform many in a row with just one move, you’ll see text appear with stuff that Peter Griffin would say, like “Unbe-Freakin’-Lievable”, or “Sweet Jesus”, and at the end, it may even make the Family Guy representation show up when you win. When you beat a stage, depending on which characters you served drinks to, you’ll see pictures or dancing characters, like Cleveland with his dance club crew, Stewie doing some tap dancing or Quagmire being submitted by japanese adult actresses. There are collectibles to get by beating certain challenges and achievements, which give you a little more to do in regular stages. Things like using 3 times a certain power up, or finishing a level without ever moving a given color. The only complain a fan of the show would have, is that in the story bits of the game, where Peter speaks to other characters, there’s no voice over, it’s all in comic like bubbles; the dialogs are funny, and just what you’d expect from the show, and they even joke about not having enough budget to pay up the voice actors, but still, as Griffin says, “it would’ve been a heck-of-a-lot better” with voice work.

Familiy Guy Another Freakin’ Mobile Game is free on Google Play and the Apple App Store. You’ll never see advertising of any kind, the game won’t even tell you to purchase in-game currency or other in-game offers, and if you’re a good player, you can probably beat all levels on your first try without ever needing extra power ups. Still, you can get some boosters with regular playing, asking your facebook friends and just connecting everyday to play.

Familiy Guy Another Freakin’ Mobile Game is a great puzzle game, that really doesn’t innovate the genre, but it’s like it took the most popular match-3 titles and gave them a funny cartoon skin loaded with jokes and funny elements, that make you forget that the gameplay is essencially the same as Disco Ducks, which just may happen to be the best match-3 puzzle there is. If you’re a fan of puzzles and the Griffins occurrences, download it now. Pros Cons