by: I Fight Bears

Fist of Awesome by I Fight Bears is the greatest time-travelling-lumberjack-em-up of all time. If you like games like Streets of Rage, Double Dragon and Final Fight, you have to give this one a try.

Fist of Awesome is a Retro Arcade style Beat ’em Up, so the objective of the game is to defeat all enemies to keep advancing. Like late 80’s and early 90’s Brawlers, you advance through the levels fighting hordes of enemies with punches, kicks and throws. You can also grab an enemy and attack with knees to the gut, and even stepping on a downed opponent for extra damage. 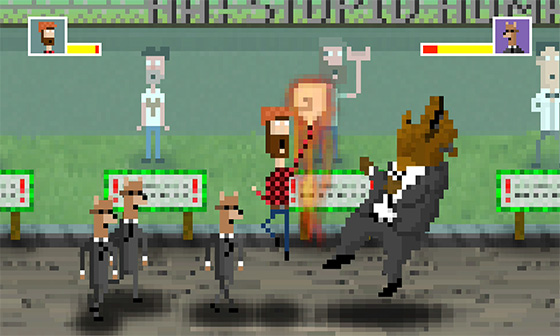 Levels always follow the same concept. The lumberjack will start in a fixed screen and must eliminate all bears and deers, then he can walk again and the camera will scroll for a while, then lock again and enemies will come in to try to beat you. This dynamic repeats itself until the level boss, who’s always a really big bear, and that’s it. The control works just fine. A stick to move, a button for punch, another to jump, and a kick. Is quite simple, like the classic games it’s based from, but you can Level Up the lumberjack. As you fight and complete stages, you can select more Health Points, stronger attacks, or to get the “Fist of Awesome” which is a “Dragon Punch”, an upward jumping uppercut commonly used in Fighting Games.

They sure look way too pixelated even for a 240p resolution game standard, but that’s the style the developer was looking for. Even with the blocky look, there are many details to notice, like funny texts on billboards, signs with movie/gaming references and some nice looking shadows and lighting effects. 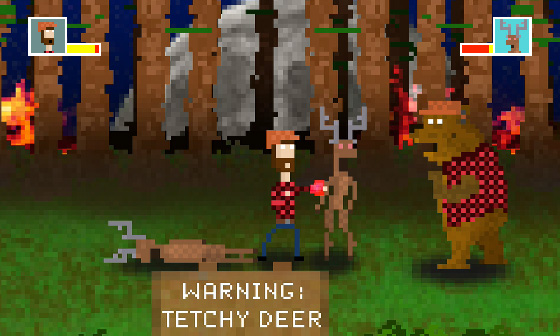 The characters don’t move around too much, but there’s enough Animation thrown in here and there to make everything look quite lively. About the backgrounds, you can notice exactly what the characters and objects in the scenery are supposed to be even with the 8-bit look. There’s even the Iron Throne from the Game of Thrones Series! Overall, Fist of Awesome portrays a very appealing visual style for fans of old school videogames and Pixel Art in general.

The game is actually longer than most Arcade Beat ’em Ups were back in the day, and the whole Leveling Up mechanic makes for a more compeling experience. Also, the story is well written, with dialogs that should make you have a one or two laughs. 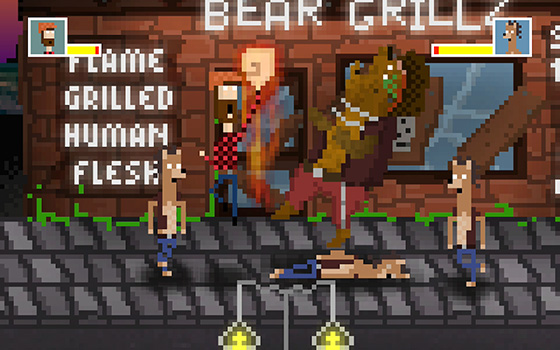 But it sould be said that the adventure gets pretty repetitive quickly. There are only 3 types of enemies, they just change clothes, and the lumberjack has very few moves. 8-Bit games of this genre were like this 20 years ago, but nowadays Fist of Awesome is only recommended for fans of the classic Beat ’em Ups. On a final note, the soundtrack is great, awesome chiptunes that really give value to the overall game experience. The music here is quite memorable and you may even consider buying the OST after you finish playing.

Fist of Awesome is valued $3.99 on both Google Play and Apple App Store. That’s actually about the price nowadays of some regular 3D digital games originally made for PS3 or Xbox 360 5-7 some years ago… But still, Fist of Awesome was mostly a one man effort, and for what it wants to be, a throw back to the Glory of Beat ’em Ups, it’s a great effort, so consider buying it to support the Creator, fans of the genre would feel the game’s price is actually pretty reasonable.

Fist of Awesome is a great purchase for fans of late 80’s, early 90’s Beat ’em Ups that flawed the Arcades and 16-Bit Consoles at the time. It may get a little repetitive after a while, so it’s only recommended for Brawler Enthusiasts. Pros Cons