Fist Puncher by Team2Bit is about a team of vigilantes: Doctor Karate, Steroid Jackson, The Beekeeper and Hella Fistgerald who clean the streets of a city plagued with unlaws.

The objective of the game, as the genre says, is to Beat ’em Up. You hit the streets with one of four characters, and eliminate every thug, punk, zombie, chopper, nudist, anarchist, ninja or whatever gets in your way. At the end of the Stage there’ll be a Boss, and defeated, ‘Mission Complete’ and you can go to the world map to select a different level. As for the control, you can move around walking, have your basic combo with punches, kicks, you can grab enemies or pick up weapons and throw them, run towards your opponent and perform a dashing attack, and you also have a Special Move that depends on the character. Like Doctor Karate ‘Fireball’ 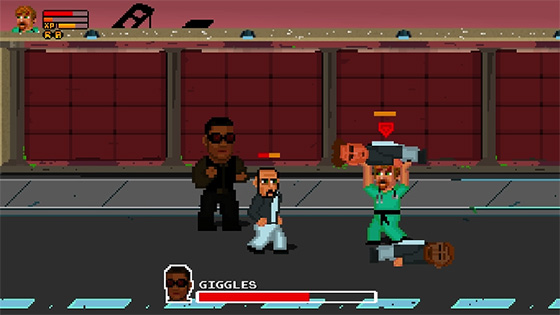 You also have a jump button, are able to defend (from weak attacks), and finally there’s the ability to do a escape roll so you can use to get out of dangerous situations (just like pressing A+B in King of Fighters) You can level up your character as you play, and each time you gain a new level you unlock perks like a new Special Move, bigger Energy Bar, more speed, power or even a health regeneration chance. Performing Specials consumes a ‘Spirit Bar’, so it’s wise to upgrade it so it becomes bigger and autoregenerates faster.

Fist Puncher features pixel art graphics, in the same style of the classic Arcades is based off; but in just doesn’t look as good as those late 80’s-early 90’s games. While it does have lots of variety in the characters looks, clothes, faces and all that, they look quite simple and don’t move around too much. Animation also look kind of blocky, and at least with the main characters it would’ve been nice to have more smooth moves. 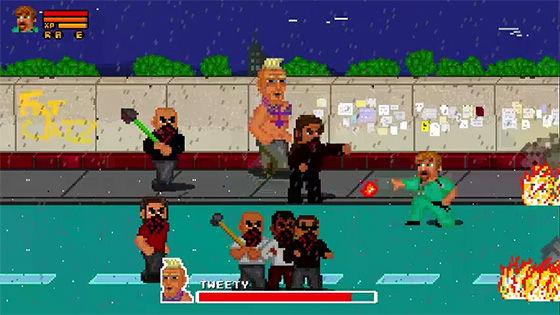 Backgrounds also look a little too minimalistic, but there are so many stages and objects scattered around the levels that it’s understandable the developers went for a ‘simple’ look in order to have as much variety possible. Retro Brawlers used to have the same type of enemy coming time again and again, and after some time, the same enemy appeared with a different color palette. Here at least all characters look quite different from each other. Even if the game doesn’t look quite stylish as some games in the 16-Bit generation consoles, Fist Puncher is quite massive game; one of the longer Beat’ em Ups there is, and it deserves to be praised just for the amount of features it has. Even if the fighting can get repetitive after a few hours, there’s so much stuff to see that you’ll play one more mission just to see what pops out.

Fist Puncher started out as a KickStarter project for a PC title, the idea behind the game was to create a retro style brawler for modern gamers, which means to include tons of content. There are hundreds of items, weapons, enemies, boss battles, vehicles and stuff to unlock and discover. You find more vigilantes to join you in your crusade, and each one is has unique characteristic, moves, Specials and everything. It’s amazing the amount on content Team2Bit included in a Beat ’em Up. 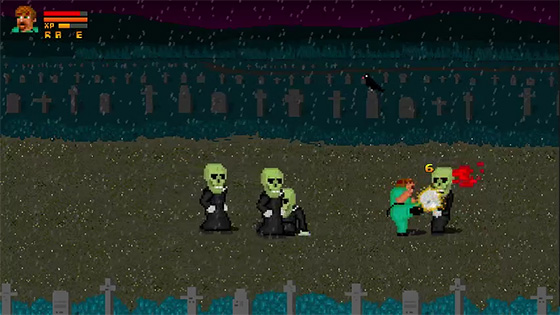 The level up RPG elements are well thought out, and unlike other Mobile games where you have to make in-app transactions to upgrade your character, Fist Puncher is a paid game, and you must unlock every feature with your gamer skills alone. The music is made of chiptune soundtracks with a urban tone that really fit the game. Characters don’t have voices but the sound effects are great. Even if it could have improvements on the visuals, there are no complains in the audio departments, and there’s so much variety that fans of retro brawlers will be coming back to see what more does the game has to offer.

Fist Puncher is $9.99 in Google Play. While it is a game with lots of content, most people will find expensive anything over $5 for a Mobile Game, even a game of this size, specially considering that digital titles with similar amount of content, on services such as Steam, can be found for less than $10. Fist Puncher is recommended for fans of old school Beat ’em Ups, someone who is not fan of the genre may want to wait for a Sale on Android Games, since the asking price is one of the highest on the Store.

Fist Puncher: Streets of Outrage is totally recommended if you’re looking for a fun retro brawler. There are many features to unlock and leveling up your character gives you a reason to comeback to the streets of outrage until you save the city. Even if it’s kind of expensive, players fond of classic brawlers like Double Dragon and Final Fight should give it a try. Pros Cons