Flap your way to the hole with this unique spin on our famous golf game! Using the now famous “flap” mechanic you must get to the hole in the fewest flaps as possible! Can you get gold stars on all the holes?

Flappy Golf is a 2D game based on the club-and-ball sport but with rules and gameplay mechanics that are very different to the tradicional golf. Just like in the real 18-Holes event, your objective here is to get a ball into the hole by hitting it the least amount of times, but here is where things get weird. 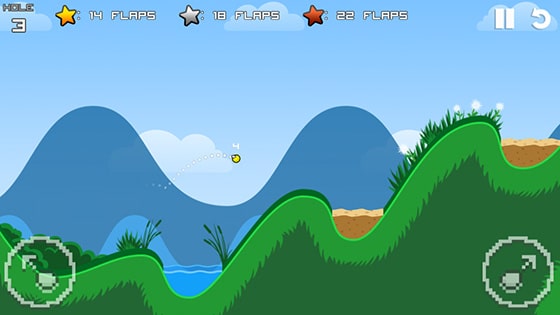 Instead of measuring the strenght and angle of a shot like in Pangya and similar titles of the genre, here you tap the left or right side of the screen to make the ball “flap” that way, and everytime you hit it while it’s in the air, the next hit will make it travel for a longer distance each time until it lands and stops moving, then the “flap” power will reset, and when you hit it it’ll travel the same distance of the first hit, and the process will repeat. Physics play a big part in the way the ball “flaps”; when the ball is in the air, you may start hitting it the opposite way, but it will not turn around immediately. What happens is that it’ll go half a distance to the other side, and you may need to hit it several times until the ball is actually moving towards the other end of the screen. At first, the courses will be very easy to travel, but soon you’ll see sand traps and deep grass, that will stop the ball right away, unlike the bouncy terrain. And when the ball lands in water, you’ll have to start over. In later levels, you’ll find sicky traps on floors, walls and ceilings, fans that blow wind upwards to move the ball, and even portals that teleport the ball to different parts of the stage. On top of the screen you can see how many times you can hit the ball in order to get a star. The are a lot of holes to play, but advanced courses will be unlocked only after you get a certain amount of stars. Scattered on the levels, you can also see diamonds floating around, these work as the game’s currency, and can be used to buy other balls in the shop or customize the one you already have.

Flappy Golf features smooth 2D cartoony graphics. They don’t look very detailed, but you can actually notice many plants in the first fields you visit, as well as gradient colors for the backgrounds, and in later levels like the city and futuristic building, there are plenty of visual elements to complement the gameplay experience. 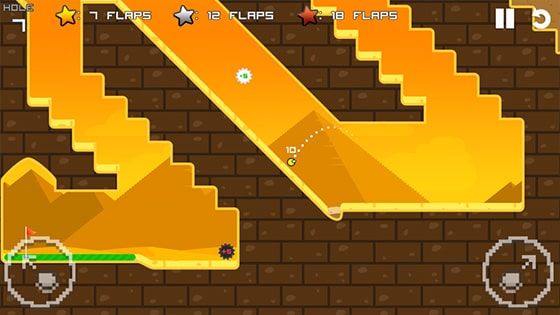 You can play in different weather conditions and times of the day, and even see cool looking stuff like aurora borealis in the North Pole course. While you don’t see people, animals or many moving objects, there’s enough variety in the stages so you don’t get bored easily, since there are many games that use the same elements over and over again and just rearrange them; here you actually see very different levels when you move from one course to the other.

Flappy Golf features over 52 courses, each one with 9 holes, that’s almost 500 holes to play. And not only that, each hole can be beaten in many different ways, and it’ll take you a while to figure out how to get the golden star in each level, so you’ll be entertained for quite some time. 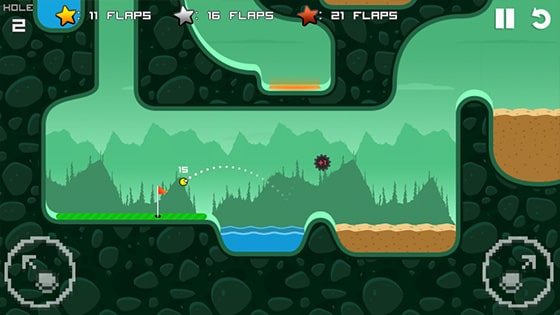 The audio you’ll hear while playing is what you’d expect, nothing really memorable, but it just “fits”the game. There’s also multiplayer mode called “King of the Hole”, where the objective is not to finish a hole with the minimum amount of strokes, but to finish it the quickest, and it’s fun to see your friends balls flapping around the levels while you try to beat them.

Flappy Golf is free on Google Play and the Apple App Store, but you’ll see some advertising here and there as you’d expect. You can buy diamonds to support the developer through in-app transactions, but even when you buy new balls, they all behave the same, so it’ll be just to help them update the game with more courses.

Flappy Golf certainly tries to do something very different than your average mobile golf game. There are hundreds of holes in very different settings and each one has different paths to try and get to the hole with the fewer hits, and the King of the Hole completely changes the rules by challenging your friends to get t the hole fast. Check it out if you want a casual game that has simple controls and gameplay physics but gets more and more complex as you play. Pros Cons