What do you get when you mix techno, dubstep, spikes and a rainbow? Geometry Dash Meltdown by RobTop Games. Prepare for a new rhythm platformer adventure filled with more spikes and monsters than thought possible!

Geometry Dash Meltdown is a rhythm based platformer where you take control of a square that advances automatically in a way full of dangerous traps. You tap the screen to jump, and in some sections you can jump while in mid-air, and get into a plane hwere you go up by pressing the screen, and down when you lift your finger. 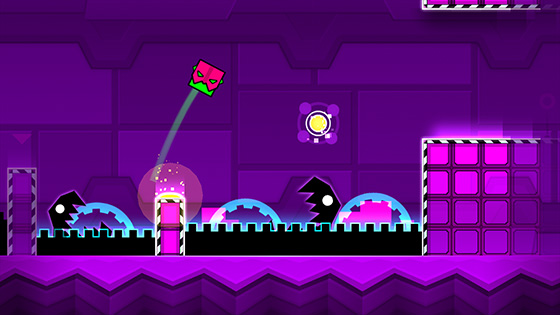 Currently there are 4 missions to play, with more coming soon, and the objective is just to reach the goal at the end, but that’s not easy at all. As you go right, parts of the level will start being created, so it’s kind of hard to predict what your next move should be. Sometimes you’ll see a platform going down, so instead of jumping you need to let your square fall down, and sometimes spikes come up from the ground and you need to jump quickly. Sometimes you’ll find a key item you have to collect in order to activate platforms to jump on to. In the middle of the level, there’s a portal enter and come out flying on a plane, and have to avoid crashing into walls that will pop out to stop you. After a while you’ll enter into another portal to keep on with the regular platform action. For an extra challenge, there are golden coins with a star shape in the middle that are hidden in hard to reach parts of the level, it is not necesary to collect them to win, but adds replay value so you may want to try getting them after beating the level.

Geometry Dash Meltdown features neon looking 2D visuals, with some objects acting as light sources that flash according to the beat of the music. Enemies and spikes are mostly silhouettes, but the platforms make use of different color gradients and patterns that make for a nice design that fits the rhythm based gameplay with night club enviroment. 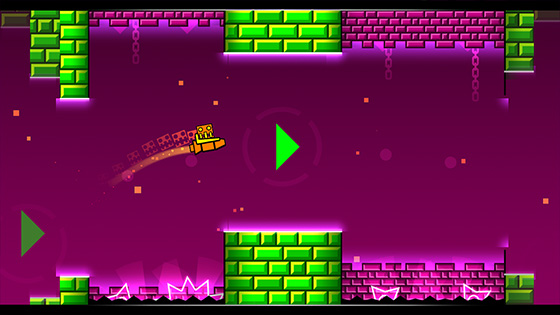 When your geometric figure moves in the platforming section, it leaves a fading trail of color, and on the plane you can see how it leaves images of itself, each one becoming more transparent, so the overall motion of the character looks pretty good and easy to follow. While most of the time you’ll be playing like if you’re on a well lit street, sometimes everything will light up like a disco dance floor, along with the music that will get more bouncy and upbeat.

Geometry Dash Meltdown it’s too similar to the original game, and it seems more like a “dark” or “fire” version of it than a sequel. It doesn’t really add new elements, and it’s like you’re playing other levels of the Geometry Dash. 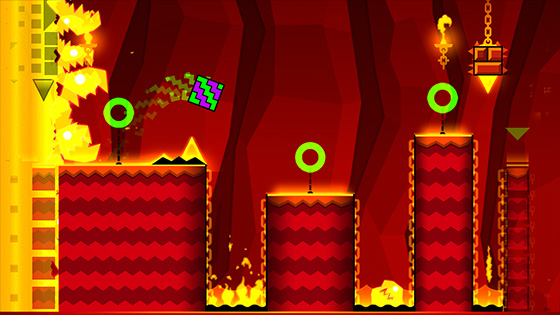 The music is great, and you may feel like listening to it outside of the game. It’s relly catchy and it fits the gameplay just perfect. The levels are long, and while not random generated, their design is pretty challenging and you won’t memorize them in just a few playthroughs, and there are the hidden coins for a bonus challenge. You can unlock other colors and figures to play as, and if you’re having a hard time, practice mode lets you continue on a check point when you lose, and it seems to go slower overall.

Geometry Dash Meltdown has a free version available on Google Play and the Apple App Store. It shows video ads after you lose, and if you’re not a good player, you will see them kind of often. The full version is worth a couple of dollars, it has a level editor, more levels, achievements, extra colors and lots of characters to play as. If you really enjoy the free version, it has a reasonable price, consider it if you enjoy the genre; but most casual players will be satisfied by trying out the lite version for a while.

Geometry Dash Meltdown is a fun fast-paced rhythm platformer with catchy music and nice 2D dance club based visuals. It can get pretty addictive for gamers that enjoy infinite jumpers, and the full version comes with level editor so you can create your own unique challenges. While the Lite version only has 4 levels and just a few features, it’s a good demo to consider buying the full experience. If you’re a fan of the genre, it’s worth it. Pros Cons