Angry centipedes are coming down the screen to attack your hero! But you are well armed and able to defend yourself and your Garden from the coming killer bugs! Free classic arcade game shooter with increasing difficulty and vibrant colors.

Centiplode is based on the classic Arcade space shooter by Atari “Centipede”, where you battle a giant space bug which can break into tiny heads and come down to hunt your ship. 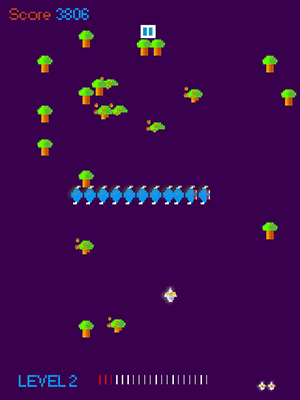 You can move in the lower part of the screen, and move about 30% up on the screen. Just touch the ship and drag your finger to move around and shoot, or press somewhere to have the ship move over there. You will shoot as long as you’re touching the screen, but there’s another control configuration where you tap the top side of the screen to shoot. There are trees blocking your way, and when the centipede touches it, it turns around and goes down one space. It can go down all the way to the bottom of the screen and then start going up little by little. When you shoot it, it will break in half, splitting in the head you shot, and each half will go to a different side. The body part you shoot will give you 10 points and become a tree, and these obstacles take 3 shots to disappear. If you manage to get the last head that moves everything, you’ll get 100 points. There are other types of enemies, like a fly that moves diagonally, which gives you 300 points, a flea that drops down from the top leaving trees along its fall, you earn 200 for destroying it, and a scorpion that gives you 1000 points, so keep shooting. Just like a machinegun, your ship’s main weapon overheats and you can’t shoot continiously forever. In the lower part of the screen you can see an energy bar that goes down as you shoot. If you never release your finger and reach the red part, you’ll only be shooting 1 laser blast per second instead of several. The objective of each level is to destroy all the parts of the centipede. When you do, another one will appear, but the same obstacle trees will remain in the stage, so it’s a good idea to shoot them when there are a few body parts to eliminate. You start out with 3 lives, but can win more when reaching a certain score. If you lose them all, game over, you’ll get a record and have to start over. Just like an old school arcade.

Centiplode has the style of an early 80’s coin-op game. It makes use of pixel art with vibrant colors over a blank background. And like old space shooters, you can see flashy laser blasts and when you destroy something, it explodes into tiny blinking colored squares. 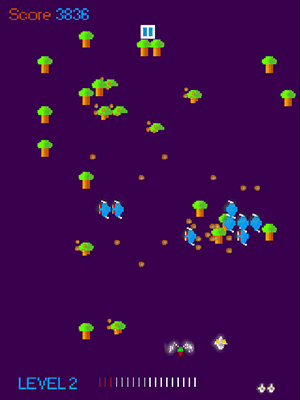 The elements on the screen don’t feature much animation, just a couple of changes of position like games from 30 years ago. The are a few modern effects like glow on your ship and the special monsters, and there’s also camera shaking added when you hit something. Althought it may become a little distracting, but there’s the option to turn it off. Overall, this game manages to look like the game is based on, with a few improvements that wouldn’t have been possible back in the day. Retro gamers will probably love the look, but casual players may not be so fond of the particular visual style.

People that used to spend lots of quarters in the original machine will probably play Centiplode for long periods, but a modern player is not likely to get hooked into this kind of gameplay. 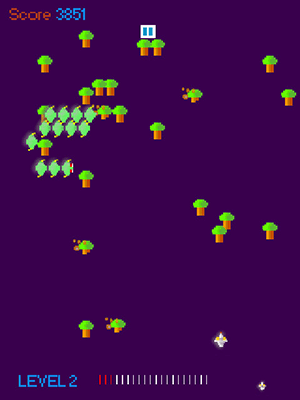 The core gameplay is fine when you start, but soon gets pretty repetitive. Even with the special enemies appearing from time to time, compared to 90’s SHMUPs and modern shooters made for mobile devices nowadays, Centiplode doesn’t offer much. The chiptunes and SFX are pretty good and remind you of the old Atari hit titles. Overall, thsi game really gets the whole early 80’s arcade feeling, and you’ll probably want to improve your record and play again a couple of times, but there isn’t much to keep your attention.

Centiplode is free on Google Play. It does have in-game advertising and you may see an ad from time to time, and that’s to be expected from this kind of games. What you see isn’t really intrusive and it’s a great free arcade you can carry around in your pocket, without spending 25 cents everytime you want to try to get a new record.

Centiplode is a throw back to a time when space shooters where in every Arcade place, and people spent a lot of coins trying to leave their initials on top of the best score records. Nowadays, an average player may not appreciate what the developer wanted to accomplish, but people that grew up in the 80’s are surely to have a blast playing this Centipede inspired Shoot ’em Up. Pros Cons