Thunder Raid by Tencent Mobile Combine is a 2D Top-View Shooter loaded with Action. Smooth controls, multiple combat and ammo barrage action, lots of ships, characters, weapons and power to equip and upgrade, make it a good choice for SHMUP enthusiats, be it in Mission Select Mode, or in the classic Arcade style.

Thunder Raid is an Arcade style top-view shooter, and just like the classic coin-ops that it’s based on, your objective is to clear a set of missions by destroying all enemies, while avoiding all their attacks. There’s a World Map where you can select the stage to play, or you can play the retro Arcade mode, where you go on playing every level in a row, and have to go all the way back to the beginning if you lose. 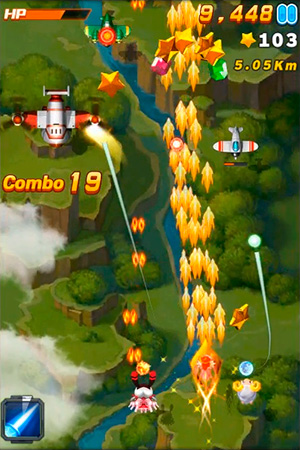 The Control is pretty simple, your plane shoots automatically, and you only need to moving around by dragging your finger across the screen where you want it to be. Some Special Weapons will have an Icon at the left side of the screen, and you tape it to activate. The Nuclear Bomb which creates explosions in the whole screen attacking all enemies can be activated by the Icon of by tapping the screen twice quickly. When you beat a level, you get a treasure chest that give you random items, a new character, or a pet. Pets are like satellite ships you can have on your left or right, that have their own attacks, such as launching missiles, homming energy beams, or a machine gun. Before starting a new Mission, you can upgrade your Ship stats by leveling up, buy and equip new weapons and selecting which pets to take with you. Pets can also be leveled up by using EXP tickets, and you can even use other pets as a power up to upgrade the one you equip. When you destroy an enemy, it’ll drop Stars that you can collect for Points, Gems for Money to buy upgrades for yous ship and pets, different weapons with limited ammunition like Wide Shot, Laser, Heavy MachineGun and such, or items to use immediately, like the Magnet, which absorbs all collectable objects, a Shield, Heart of Health, and a Turbo Boost, that makes you invencible for a short while and makes you advance hundreds of kilometers of the level. In Story Mode, levels are quick to play and sometimes you only need to advance a short distance and that’s it. Other times a big powerful enemy ship serving as a mid-boss will appear, and you have to beat it to complete the mission. Every few Stages there will be a Skull marked on the World Map, and that’s a longer level with a Boss fight at the end.

Thunder Raid features pretty good looking 2D art, but with a CG technique that gives a certain 3D feel, without losing a certain cartoon-like, obviously influenced by japanese cartoons. Everything in the menus is hand drawn and looks quite nice, the character portraits are in Anime Style, and even if they don’t have animation, they make up for it with excellent art quality and voice acting. 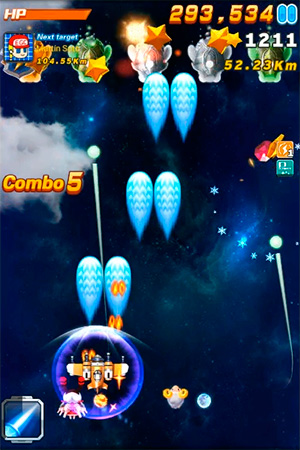 The weapons and explosions seem to be 2D art, with transparency and lighting effects to enhance the visual experience. The items you can collect such as stars and gems, are rotating in 3D and some elements such as the shield, turbo boost and hyper beam seem to be in separate layers of 2D alpha animation for a great look. A little complain is that the stage backgrounds are just a picture scrolling, and a few cloud here and there moving independently. Similar games have multiple layers for parallax scrolling, and feature animated elements in the background. But even if Thunder Raid may not be the greatest looking mobile SHMUP, it’s still comparable with the great ones.

Thunder Raid features what you’d expect from a free mobile Shooter, many characters to unlock, lots of items and weapons to equip and upgrade, satellite ships to fight along which you can also level up, and many levels to play, but it is kind of repetitive. 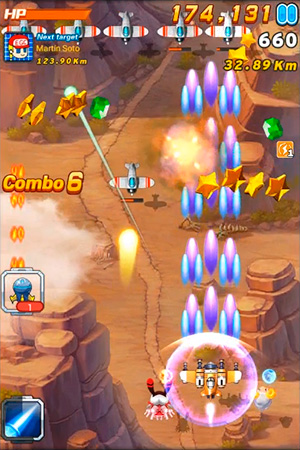 Even if there are many missions, the backgrounds and type of enemies repeat too often, so there isn’t much variety. After playing for a while, you may feel like you’ve already passed a certain part, which will be the basically the same level, just with some extra enemies. The game does get more challing as you go, but if you’re looking for a real 90’s Arcade Experience, this isn’t really one. Thunder Raid is made so you end up buying gems with real money, and some ships are extremely expensive. Since it’s designed with in-apps transaction in mind, it’s enjoyable just for about half an hour before you realize how long you have to repeat the same levels to upgrade your character enough, and that may turn down most players quite quickly.

While Thunder Raid is free to play on your Android Device, once you take a look at the in-game store, you’ll see how expensive items can be. There’s lot of content, and the game certainly has better quality than most free shmups, but you’ll have to pay a great price to see it all, just by playing, seems like it’ll take just way too long to get a new ship.

Thunder Raid is a nice Shooter to try out and enjoy for a while, a little more on the casual side. Hardcore SHMUP gamers looking for a 90’s arcade experience or a modern indie bullet hell, won’t find it here. The game is designed to keep you playing almost the same levels over and over again to level up and end up buying upgrades, and if that’s you thing, go on. For retro Top-View shoot ’em up fans, you’ll only be entertained for a little while. Pros Cons