Crash Fever is a Puzzle RPG where you and your party battle monsters with magic by connecting colored figures falling down from the sky. Just touch a magical emblem, and you’ll see lines connecting them to all of the same time that are close together. Relese your finger, and you’ll charge up your attack, and after 3 turns, you’ll unleash it on the enemy of your choice. 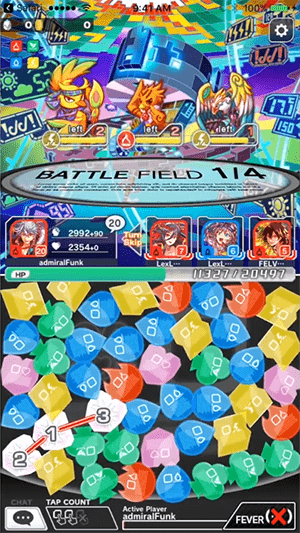 In the upper screen, you see the battle taking place. In the middle there’s your party, with your current attacking character on the left side. You can just tap on the enemy you want to focus on, and you’ll hit it with the matches you make in that turn. Your enemies have a number over their life bar showing how many turns left before they attack, and like you, they can choose who to focus on. Each character has an magic element attached, and each one is weak or strong against another. For example, fire is weak against water, but is strong against plants. Also, if the hero your currently using has the element thunder, and you connect only yellow emblems in his or her turn, your spells will be much stronger. When you make a match, the figures explode, and the others fall down filling their place, and more emblems drop from above into the screen. You’re always the first to attack, but after monsters start hurting you, pink elements that restore your Hit Points when connected also start appearing. Also, each character has a unique skill that’s activated after a few turns. It can be an spell that hits all enemies, puts them to sleep, causes paralysis, or maybe boosts your and your party stats like attack and defense for a few turns. Finally, if you make a 6-match, you get an icon with the hero’s image, that when used in a match creates a more powerful effect, and if you manage to create a 12-match, you get Bomb icons, which when connected explode taking surrounding emblems, even if they’re not of the same color. After battles you can get items or new characters to recruit in your party, and in the menu screen you can manage formations and equip them with items to create a strong team, ready to embark on an epic adventure.

Crash Fever features Anime inspired designs for characters, and the overall look of the game seems to be based in modern Japanese Animation that revolves around Virtual Worlds, CyberPunk and futuristic themes, with some touches of popular JRPG franchises such as the new Final Fantasy titles. 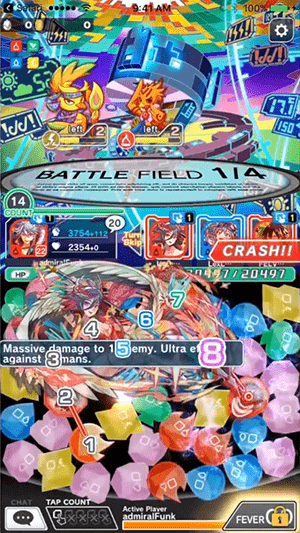 The magic attacks, icons exploding and special skills look great, with lots of flashy special effects being shown on the screen, and the backgrounds are moving around with lasers and lots of neon colors. When you activate bombs or big matches, you can see the emblems breaking in a thousand pieces, and disappearing into tiny bits. The character portraits look pretty good and are very detailed, with color gradients and many of them wearing lots of accesories, like the games and animated series this title took inspiration from. The only complain is that they don’t move at all, and after a while seeing heroes and monsters completely static becomes kind of stale. Still, here you will see very high quality visuals.

Crash Fever is not entirely original in its gameplay mechanics, but the RPG aspect, graphics and music is great, and once you start playing you can notice its more dynamic and fast-paced than similar titles, since here you don’t have to actually connect all the figures you wish to match.

Being able to play OnLine is a great feature, and with lots of characters to choose from, items to get, hundreds of quests to play, and more being added each week, this game is sure to keep you busy crashing magical emblems for quite a while.

Crash Fever is free on Google Play and the Apple App Store. You won’t see any advertising, except for the items on sale that you can buy at the in-game store. Like many similar titles, you can pay to get the game’s currency and special items, but it doesn’t seem that it’ll take forever to actually get those by playing, like other games in the genre.

Crash Fever is a very dynamic puzzle with a look that will please Anime fans and those into JRPGs. The Role Playing aspect of the game are pretty well executed, and you have lots of options to equip and level up your heroes to create the ultimate party. It isn’t a game meant for the casual user, but if you like fast-paced puzzles and enjoy the RPG aspects of similar titles, check out this match-3 adventure that is already being played by millions. Pros Cons