Pac-Man Dash by Bandai Namco features the retro videogame icon running and eating cookies and ghosts in this action filled title. Simple controls, many missions to play and lots of content to unlock.

Pac-Man Dash is you’re average Runner, the round yellow hero runs automatically, and you just need to a button on the lower right corner of the screen to make him jump, or you can actually tap anywhere on the screen. Once you get the Power Up, you can gather energy for a Quick Turbo boost to go faster for a couple of seconds, and there’s also another Cookie Eat bar, that once you fill it by munching down the Pac-Food, you can perform a mid-air jump for limited time. 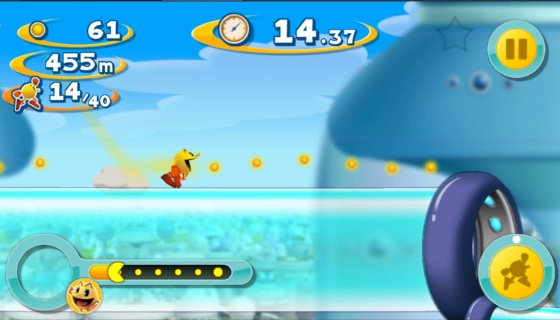 You have Mission Mode, where you must complete objectives before the time’s up (30 seconds) like eating 10 ghosts, running 500 meters, performing 20 jumps, eating 200 cookies and so on. Pac-Man can also eat fruits, which are worth 20 cookies. He eats the Power Cookie at the beginning of each mission, so ghosts turn purple when they see the blutton hero coming closer, and they try to escape. If you’re not fast enough, they will avoid you, so try saving up the Turbo Dash just for eating ghosts in those missions. Sometimes you’ll have to eat a certain amount of ghosts of only a certain color, so more reason to save up you’re Dash only when needed. You can get more Power Ups like Magnet to attract cookies, Tornado to go faster for a longer period than the Turbo Dash, and there are items so you can get Extra Time (+30 secs) or a Double Point Cookie so you earn double in a given mission. All the cookies you eat get to a bank, so you can buy items and Pac-Figures at the in-game store, and make your missions easier. There’s also Challenge Mode, which is your standard Arcade Runner game. Your objective is to go as far as possible eating everything in your way. You can get an extra couple of seconds by eating clocks, and the more cookies you eat, the faster yo go. This mode is only about breaking your previous record. There are many Stages where to play, which change the background and how the tracks, tubes and springs to jump on are positioned on the levels. There are 15 Missions per Stage, and they seem to be randomized everytime. Even if you fall down, you won’t die, you’ll always land on another track to keep going, keeping the action non-stop.

Pac-Man Dash has nicely animated 3D characters over a 2D background. The interactive elements such as tubes and springs, seem to be hand-drawn but with a good depth feel for a 3D ilusion, and the backgrounds are made up of a scrolling picture, which looks little out of focus to keep your attention on Pac-Man and what he can eat and run over. 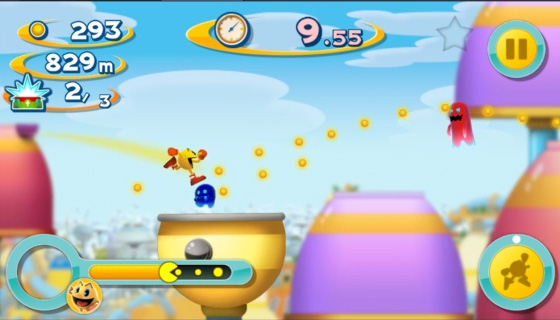 The Menus and overlayed texts that keep track of the score and such, use a lot of yellow and have a smooth modern design, but it certainly fits the Pac-Universe. And finally, some power ups trigger special effects, such as the Turbo Dash that creates a Motion Blur for the ilusion of super speed, and when you activate the Double Jump, Pac-Man starts glowing with red energy around him.

Pac-Man Dash feels more like a Sonic game, it’s all about speed and collecting items, and the yellow hero even runs on very inclined surfaces and makes giant leaps by jumping on springs, but still, the eating aspect of the game is Pac-Man’s seal, and overall the universe of the classic franchise is well adapted here. 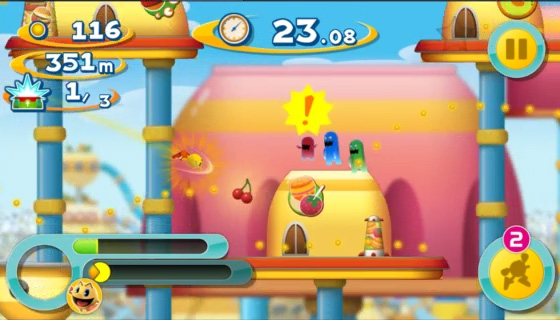 At first it may seem that Bandai Namco just wanted to get on the Mobile Runner game hype and create anything with its mascot, but far from just exploiting the character, they created a casual title that any fan of the genre can enjoy, with many missions, an endless challenge, many items and power ups to get and Pac figures to unlock. Gameplay wise, is not as addictive as the classic Maze Games, and most people not really into Runners will have their share of Pac-Man Dash by the 10th mission, but still, it’s worth trying out, and fans of games of this kind will find a very nice choice to play for hours.

Pac-Man Dash is free on Google Play and the Apple App Store, and you won’t see any ads when you’replaying normally, but when you run out of lives, you’ll have to wait for about 10 minutes or watch a 30 seconds ad to get an extra life. You can also buy lives, extra time items, Double Cookie power ups and such with in-game transactions, most worth a dollar or two, wich actually sound reasonable, so if you really get into the game and decide to buy 20 lives so you don’t have to wait, the experience is totally worth $1.

Pac-Man Dash is totally worth checking out if you enjoy a good Runner Game. It has variety in Missions and lots of content to discover. Casual players may enjoy it more than retro Pac-Man fans, but it’s a nice choice for anyone looking for a high speed easy to play title. If you’re a fan of Sonic, trying it for a while, you’ll be surprised how much it resembles a Sega’s mascot game. Pros Cons