Goblin Sword by Gelato Games is a retro inspired sidescroller platformer with RPG elements inspired by the 16-Bit medieval adventure games. It features great pixel art plus simple and responsive controls based on the NES.

Goblin Sword plays much like Zelda 2 on NES. It’s a Sidescroller Platformer/Adventure with some RPG elements. You move your character with the left/right arrows, attack with the B button, and jump with A. It’s pretty straight forward and it feels just like a classic 16-Bit game. Even if you haven’t played a platformer with touch screen before, here it feels just perfect, the big buttons are hard to miss and they’re quite responsive, you won’t have the common problem of doing a wrong action because the virtual controls are to close or something like that which is the case in other Mobile Platformers. 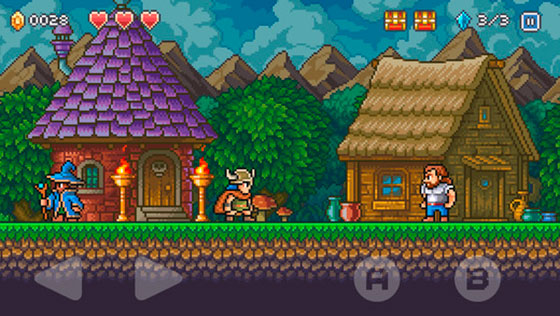 Each stage in the game has a “Go from Point A to Point B” approach, your objective is just to reach the end of the level, but it’s a little more open to exploration than most platformers. Each level has 2 treasure chests and 3 magic cristal to find, also you collect coins and valuable gems that you can sell for riches and buy more items. In the Village, you can go to the store to buy Armors for defense, Weapons for attack power, and relics so you can Magic. Goblin Sword’s world is pretty big, with 80 levels to offer. The setting is typical for a medieval Adventure/RPG, you’ll see towns, castles, dungeons, caves, forests and such… Every 10 levels you’ll encounter a Boss you have to defeat to advance. Overall is a pretty straight forward 2D Sidescroller with simple controls like the NES games Demon Sword, Castlevania 2 and Rygar. If you enjoyed those, you’ll have a good time with Goblin Sword.

The game features 16-Bit Pixel Art, it looks like the disc based games in 2D that came out for the Sega-CD or titles for the Amiga CD-32. There aren’t any fancy lighting or tranparency effects like in modern AAA Mobile Games, just good old fashioned mid 90’s style graphics, but that doesn’t mean it doesn’t look great. 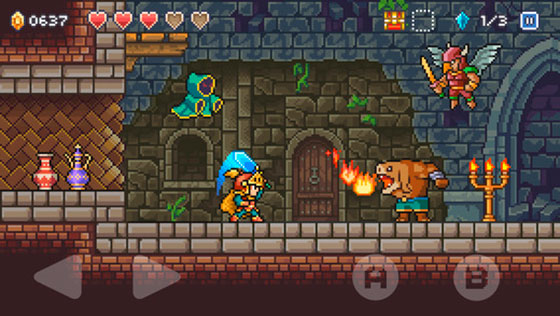 The animation is on par of quality console games made for the PlayStation or Sega Saturn on the early days. The magic attacks like fire and lighting look pretty good, the sword slashing has a cool motion blur added effect, and some energy attacks are a feast of colors and shining sparks. It looks quite impressive for an Indie Game. The character doesn’t move around that much, but it has enough animation for every action he performs. The nice feature is that he changes his appeareance with each item equipped. When you select an Armor or tunic to wear, the whole character desing changes. Also, each weapon is different and has a unique type of attack. You can also have a “Familiar”, a monster that aids you in your quest, that will follow you around and help you fight monsters. The scenery look great, pretty detailed and really set the mood of the game. There are many background layers that give a 3D dept feel to the game, and they’re aniamted quite nicely when the character moves and jumps around. Also there many objects you can interact with, such as vases, candles, pots and such that you can break to get gems or coins. There are so many elements to discover that give Goblin Sword great variety and replay value. Every playthrough you may find something new that was missed the previous time.

Goblin Sword is packed with features for gamers that want a huge adventure to get into. There are 80 levels, 10 bosses, 26 weapons with unique special attacks, 28 relics that grant you abilities, 12 costumes to choose from, 8 guardians to summon, and you can even find items to decorate your home with souvenirs. 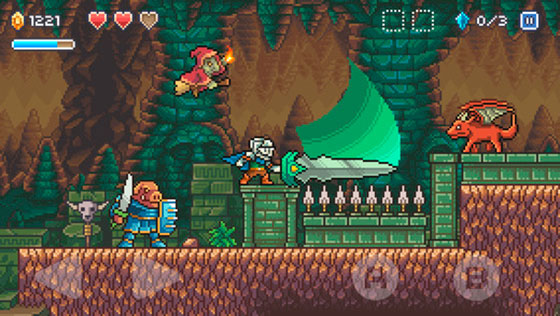 The first 10 levels start out pretty easy. Most casual gamers will have no problem playing until they reach the first boss. About Level 12, things aren’t as easy anymore, and it should be enough of a challenge for most players. In addition, the developer says that there are 5 very hard secret levels for the HardCore players looking for an Extra Challenge.

Goblin Sword is valued $1.99 on the Apple App Store, and it’s totally worth it. You’ll find games with similar (if not a little lower) quality on PC at 5 dollars or so, and this huge adventure is not even worth the whole couple of bucks. The price is just perfect and anyone looking for a retro action/RPG adventure should buy it.

Overall Goblin Sword is a great paid App that should keep you entertained for quite a while. Fans of Retro Action/Adventure games should totally check it out; it may get pretty challenging by the 20th level, but if you played similar games in the 90’s, you’ll feel at home. Totally worth the asking price. Pros Cons