Ninja Fishing by Gamenauts is a nice casual game that combines motions controls, tapping and swipping to catch and cut sushi ingredients. Sharpen your swords and swing your rods, it’s time to fish… The NINJA way!

Ninja Fishing has two distinctive play mechanics. At first you throw your hook into the water, and you need to avoid fish to make it go as deep as possible before taking it out. You need to avoid the sea creatures by tilting your device left and right, the hook goes down automatically, but if you tap the screen, you’ll do a special “Drill Attack” that will go through a fish wihout hooking it, so you can keep on going deeper. 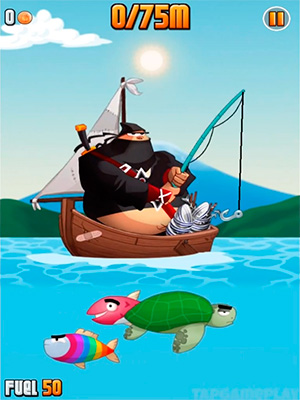 Once you get your fishing line to its full lenght (or hook a fish) you start reeling it in, and you can catch as many marine animals or treasure chests as you can. Once you get them to the surface, the Ninja will throw them to the air, and then you need to slash them with your finger, in the same style as Fruit Ninja. In the Slicing part of the game, you drag your finger across the screen to use your sword and make sushi out of your captured ingredients. Some fish need multiple slices to be cut, it’s not the same to slice a tiny fish than a turtle. You also need to open treasure chest by hitting them many times with your sword. And as an extra challenge, a bomb will be thrown along the animals, and if you slice it, the level is over. Each time you cut a fish, you’ll get coins you can use to upgrade your equipment, such as a sharper sword or a longer line, or get power ups such as a turbo hook that goes down for about 50 meters before you need to start avoiding the water animals.

Ninja Fishing features a good looking 2D hand-drawn style. The overall appeal is cartoony and has a funny design, like a saturday morning animated show for children. The animals are colorful so you can distinguish them easily, and there are many different kind of sea cretures you can fish. 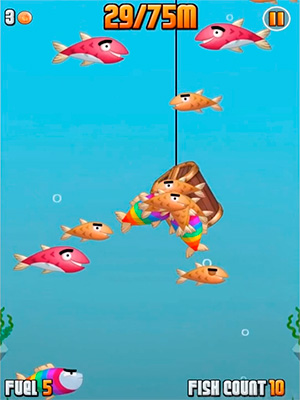 It should be said that the characters don’t move around that much. They’re pretty much static besides just blinking from time to time. You’ll see the fish going from left to right, but they don’t move their tails or change expression when hooked or something like that, so they don’t seem to be “alive” like characters in other popular 2D games that are expressive and pretty well animated. Nothing to really complain about, but it could be better.

Ninja Fishing is just a casual game, but it has enough content to keep you coming back for more. There are many stages where you can play, lots of different animals to discover, items to buy and level up, and you never know what you’ll find inside treasure chests. 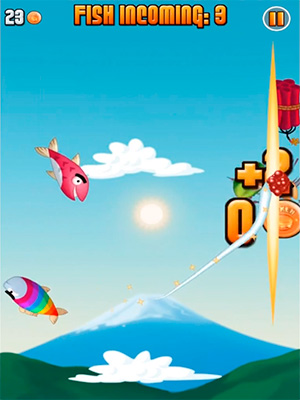 The way it combines motion controls, with tapping and touch play, makes for a good gameplay experience, and as you advance through the game and start getting and improving what it has to offer, it can get quite addictive. Similar games offer just an endless level, and a few stuff you carry around to level up, but the in-game shop here and the treasures you can find have so much to offer, you won’t get bored fast.

Ninja Fishing is free on Google Play and the App Store, but there are items you can buy with real money. Some in-app transactions could seem to be quite expensive, like the “Arcade Boat” which costs $4.99, and it’s on sale. But it’s not necessary to spend anything on this game, as it’s enjoyable just the way it is, and the coins you collect through gameplay should be enough to keep you going for many hours without having to buy VIP items on the later levels.

Ninja Fishing is a 2D casual game that combines touch and motion controls in a smooth way for a nice gameplay experience, and offers enough content to keep you applying your Secret Shinobi Arts to get fresh Sushi ingredients. It could be better in some aspects, but it’s a nice choice for anyone looking for a simple but deep game. Pros Cons