The Banacats have arrived at a safe city, but the lot given to them was very small! Now help them to build up a building for shelter.

Banacat Building is an Arcade game meant for casual players where your objective is to create a building where your cat friends can live by stacking stories one after the other using a crane. 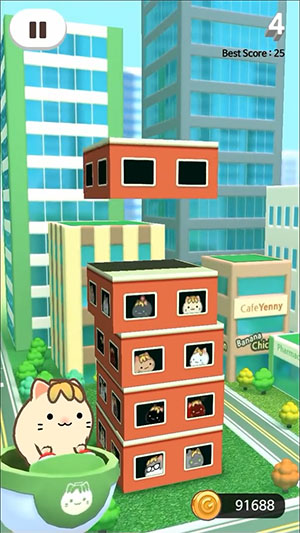 When the game starts, the first floor will be in place, and the second one will be hovering left and right on top of the screen. Just tap anywhere to drop it, and if the building is balanced enough, you can drop the next one, and keep going until the building falls to one of the sides, in which case you’ll have to start over. You get one point everytime you stack one floor correctly, but if you manage to drop a new story at just the center of the previous floor, stars will come up in the middle of both stories, and you’ll get 100 coins, that you can use to buy more banacats. The objective of the game is just to make the tallest building possible, and to break your previous record. Of course, this gets harder and harder the higher the building gets, because besides keeping the structure balanced, the crane on top moves left and right faster and faster everytime, making it more difficult to place the floor exactly where you want it.

Banacat features cute cartoon looking 3D graphics, using the “cell shaded” technique with pastel colors for a smooth and children’s book visual style. But when the building gets a new floor, you can see the banacats inhabitants in 2D appear on the windows. 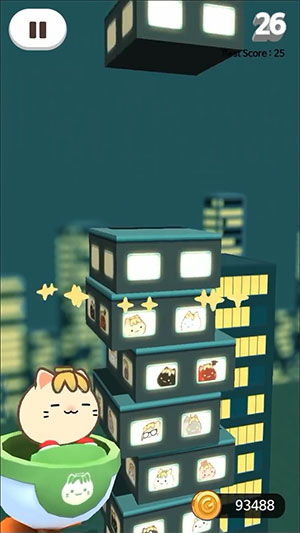 The banacat builder controlling the crane has nice animation, and its expressions depend on your actions. You can see how it moves the sticks with its little paws, smiles when it succesfully adds a new floor, gets happy and jumps when accomplishing a “perfect stack” and gets one hundred coins, and how he gets mad and desperate moving the sticks realy fast when the building is falling. There are more banacats you can play with, and while they all react the same, the idle animation while the new floor is in the air is different, which is a nice detail. The backgrounds aren’t very detailed, you won’t really see anything eye catchy, but as you play, you’ll notice that the sky turns orange just before nightfall, and then you play in the darkness before its sunrise again, which is a pretty nice touch that gives the game a little variety.

Banacat Building is a nice casual game with very simple gameplay, but for some reason stacking one block after the other can get pretty addictive, and you may find yourself wanting to make a taller building just one more time. 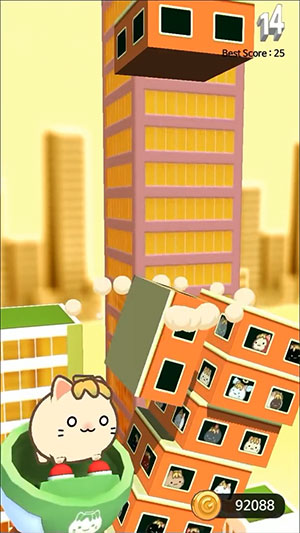 The banacats themselves are funny to look at, and the have different meows depending on what’s happening. You can tell that one meow is happy while another represents being mad. The music is pretty forgetable, but it fits the game, just as the sound effects. There’s nothing much to do besides stacking floors, but the different banacats you unlock come with unqiue abilities. For example, a black one makes you start at the 2nd floor instead of the first one, and another one makes the crane go faster at later floors, this way if becomes a little easier to create a taller building.

Value for your Money 94%

Banacat Building is free on Google Play and the Apple App Store. You’ll see a banner advertising after losing a few times, but that’s to be expected. You can also buy coins to purchase other banacats through in-app transactions, but if you get good at making “perfect stacks”, you’ll unlock all banacats pretty fast.

Banacat Building is a good option if you’re looking for something really casual with cute characters and with a simple gameplay that may get you to play quite some times. There’s nothing to do besides the main stacking mode, which can get old after a while, but since just looking at the banacats is pretty fun, you may want to play until you unlock 4 or 5 of them. Try it out if you feel like playing something not too complex. Pros Cons