One day, evil crocodile Mr. Croker invaded the Animal’s cities and stole town’s water. Match the colorful water balloons and feel cool streams, while helping Otter Oris get the water back to all animals.

Water Splash is a Match-3 puzzle where you match colorful water balloons to restore cool streams to the animal kingdom. Just tap a balloon and slide it up, down, left or right, and if 3 or more of the same color are lined up, they explode in a splash of water, filling their spaces with H2O. 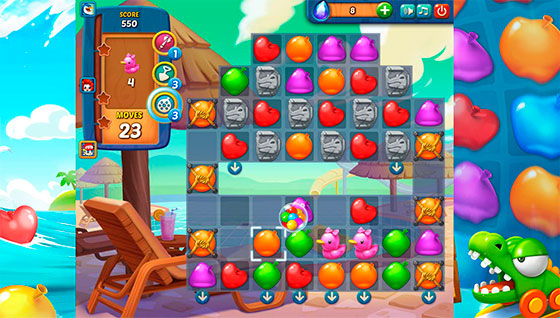 At first the objective of each level will be to fill all the grid with water by creating matches over all spaces. Then you may get asked to explode a certain amount of balloons of a specific color, and when obstacles start appearing you’re going to have to eliminate them all. There are stones that you break by making matches next to them, and there are balloons that are tied with a rope, that you get free by including them in a match, but you can’t move them and they don’t explode, until they become a normal free balloon. In other stages you have rubber ducks on the grid, and you have to get them to the bottom row by creating matches below them. To help you on your quest, before starting a level you can buy boosters. There are power ups such as the shovel, that let’s you take a balloon and place it anywhere on the grid even if no match in made, the dart that you can throw in any space you want to get rid of a balloon or obstacle, and the rainbow balloon, than when switched, it explodes all balloons of that color. You can create a rainbow balloon if you manage to make a 5-match in a line. If you make a line with 4, you create a ring balloon, that when included in a match explodes either vertically or horizontally. And if you make a 5-match in a way that you intersect a vertical and horizontal 3-line, you receive a cross ring balloon, that explodes with a stream of water in the whole row and column of its space. As you advance, you’ll have Boss Fights where you must defeat Mr. Croker. He’ll have an energy bar that shows you which balloon to match to damage him. By exploding balloons of that color you’ll start depleting his life bar until you win and move on to the next stage, and every 20 levels or so you get to another section in the world map.

Water Splash features a nice 2D hand-drawn art style. Elements in the grid are colorful, detailed and have a pretty good shiny desing, and balloons come in different shapes. The water streams look great, it’s a pretty cool effect to see when the balloons explode and you see the water current and bobbles everywere. 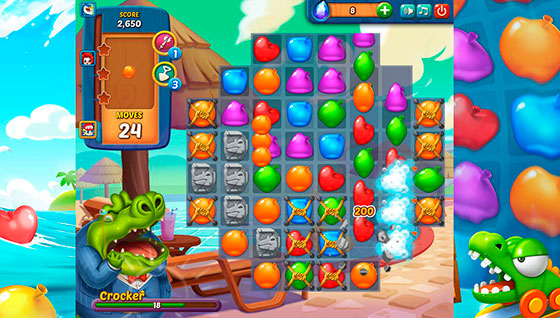 The backgrounds look fine, but they are not animated, and you only see Oris the Otter in portraits before each level. In the boss fights you’ll see Mr. Croker, and he reacts to your actions, and you can see him getting hurt and how he looks mad when you’re about to win the level. In the world map there are other animals as well, but there’s not much animation going on besides the elements in the grid when you play.

Water Splash features over 1000 levels, and tries its best to give you different objectives and unique challenges to overcome. By mixing up the different obstacles and grid deseigns, it keeps the gameplay fresh so you can go on for quite a while. 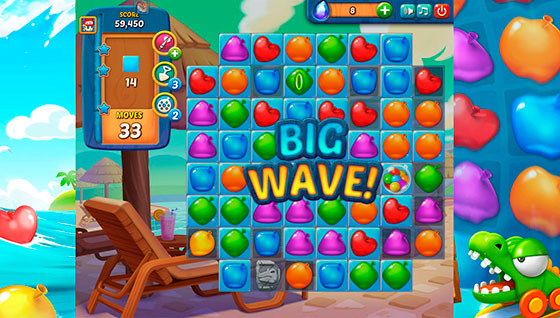 While it doesn’t really change much of the match-3 formula, it’s just perfectly executed, and if you’re looking for a casual game, it starts pretty easy so you can have a nice time, but in the second section of the world map things get a little more complex to get puzzle fans still playing. When you win a stage with a good score, you get to spin a bonus wheel to get golden coins (game’s currency) lives or power ups, and there’s a daily reward for you to come back and claim, so the game tries to keep your attention on the long run, and it’s still being updates with more levels.

Water Splash is free on Google Play and the Apple App Store. You won’t see any advertising and it’s not necessary to purchase anything through in-app transactions. You have limited lives and need to wait to get more when you lose them all, but you can win golden coins to buy them or extra lives by spinning the bonus wheel. If you’re a good player, you can win everytime just with your skills, so just consider buying something to support the developers if you enjoy it.

Water Splash – Cool Match-3 is a nice puzzle with simple controls and pretty visuals that you should try out if you enjoy this kind of games. While it doesn’t really innovate the genre, and it may seem to be very similar to other puzzles, here everything works perfectly and the water theme is not something you see very often. A thousand levels with varied challenges are waiting for you, so give it a try, it’s free. Pros Cons