Maid & Slime by Kaiman games is a new twist on the wack-a-mole style of games, with an anime inspired setting and great pixel art animation, along with nice music and SFX. Help May get rid of the monsters and save the day, tap on those slimes!

Maid & Slime is essentially a Whack-A-Mole game, with RPG elements. In each level you must fight some monsters that will appear on the upper part of the screen, and the battles take place in the lower part, where slimes pop up from holes and you must tap on them before they hide again. 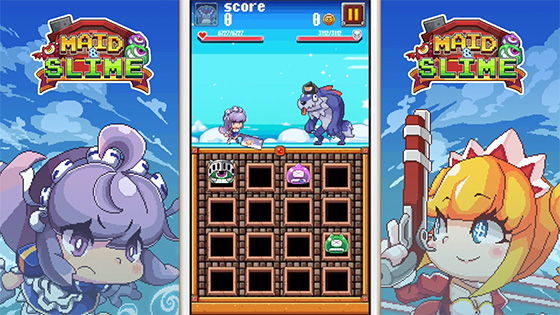 There are purple and yellow slimes, which explode with one tap, green slimes that wear armor and take two hits before exploding, and finally there are red spiked monsters that you shouldn’t tap on, since they hurt you. If you tap on more slimes than the ones you miss, the maid will attack the monster in the battle screen, and she will start depleting its HP. Once the enemy’s hit points reach zero, you move on to the next monster, until you finish them all. Battles can be one of 3 modes. In Mode A, the slimes appear and hide randomly and you must tap them before they go down again. If you miss half of them, the monster will attack you. In Mode B, all spaces on the lower part of the screen will have slimes already visible, and a “Target” bubble will be shown above the maid, saying which ones you must tap. Then you will have a timer on each turn, and must eliminate all targets before time is up. In Mode C, what changes is the timer, instead of reseting on each turn, you’ll get about 10 seconds that will stop on each turn and then start again. When it reaches zero, the monster will attack you, and then it restart from 10 secs again. When you finish a level, you can go back to the World Map to select the next stage, or enter the shop to buy weapons and items. There’s a potion that restores some of your HP when you’re low, and a Special Attack you can activate at any time by tapping an icon just below your life bar. May summons a giant butcher knife to attack the enemy, which does a lot of damage. May gets experience by battling monsters. When you level up, you can use coins you get by playing to upgrade one of 3 stats, Hit Points, Attack and Defense. Besides buying with coins,when you finish a level, you get a random reward. 3 yellow treasure monsters appear, and you tap on one of them to get an item, like the Special Attack, a potion, coins or an item to equip. Also, when you complete certain achievements, like “Tapping 500 slimes” or “Battling 50 mosnters” you gets rewards like red gems, which are a rare currency you don’t get just with battles.

Maid & Slime features great pixel art animation. The maids and the monsters are always moving around and they all have funny expressions and Anime elements, like May getting a golden fire around her when you activate the Special Attack. 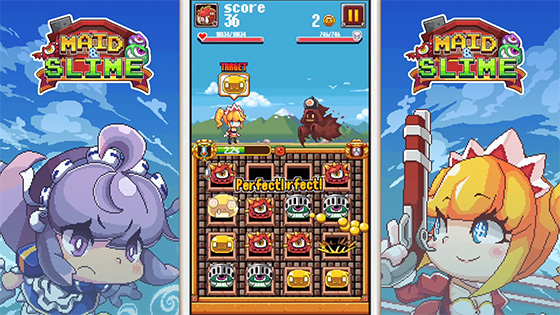 The backgrounds look pretty detailed and you can see birds and clouds in the distance, and let’s not forget about the slimes, which have reactions according to what you do. Another feature worth mentioning, is that when you attack, or get attacked, a little cinema displays on the whack-a-mole section, where you see portraits of May and the monsters fighting, besides que action occurring in the upper part of the screen.

Maid & Slime could be the most complete Whack-A-Mole style game available now. While the core gameplay is just to tap on colored slimes like the classic arcade game, the RPG elements will keep you playing for quite a while, and it’s loaded with so much content that you’ll be smashing jelly creatures until your max up your stats. 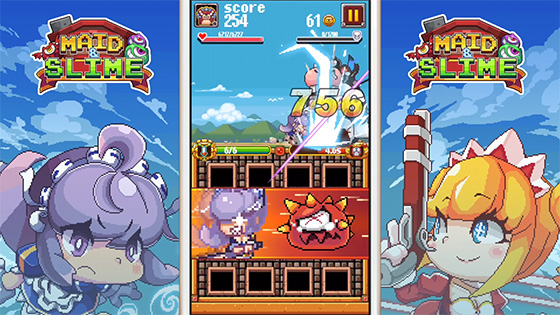 Besides the main levels, there are some extra missions to get rewards within normal play, like winning a level without getting hit, but some of them are not really challenging, like completing the tutorial. The music and sound effects are pretty good, and hearing the noises the slimes make when you squash them adds to the overall experience. The scenario changes after a few levels and there are lots of monsters and boss characters to fight. You can also unlock another maid and an outfit for May.

Maid & Slime is available for free on Google Play, but you get most items by buying them with red gems, which are very hard to collect with normal gameplay, so if you want to equip stuff, you’ll pretty much have to spend real money to purchase in-game’s currency, and after playing for a while, once enemies get tougher, you may feel like you can’t really advance without spending a few dollars.

Maid & Slime is a great new twist on the Whack-A-Mole style of games. The pixel art graphics and animation are great and fun to look at, the music and overall gameplay is entertaining, and it has a few changes here and there to keep you entertained. The game has 100 levels to enjoy, plus dozens of achievements and lots of items to collect. If you’re looking for a casual anime inspired tapping arcade game, look no further. Pros Cons