Woka Woka by Two Desperados is an Action Arcade Puzzle Marble Shooter with lots of power ups and special balls with cool looking special effects. Help Woka the Turtle get back home by blasting colored marbles in this great match-3 game.

Woka Woka is an action puzzle game inspired by the classic colored marble shooter “Zuma”, where you’re in control of a magic turtle in the center of a field, and there’s a road of marbles going to a cave, and you must stop it from getting there by shooting marbles, and if you match-3 or more, they’ll disappear. 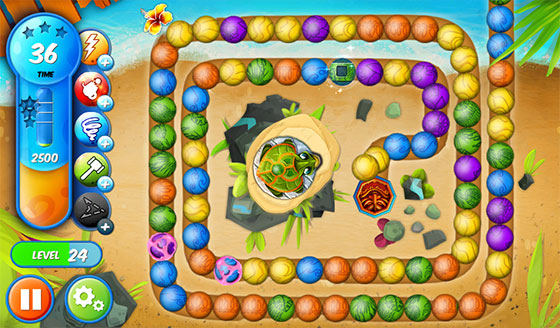 Most of the time the objective is just to blast all marbles before they reach the final cave. You only need to touch the screen to begin aiming, and release your finger to shoot. You have unlimited colored marbles, and when you take a shot, another marble of a random color gets ready for Woka the Turtle. If you don’t have a useful color, you can throw it at the end of the screen to get one that can be matched, but keep in mind that there is a time limit, so be careful not tot waste many shots. When you make matches in middle of the marble chain, the ones in the front will go back, to reconnect the chain. If when that happens there’s a new match made, you’ll begin a combo. When you make a triple combo, you get a special marble to shoot depending on the last color that lines up. There’s the rainbow ball, that matches any color, and even if you throw it between two different colored marbles, they both disappear. You can also get a fire shot that goes right through the chain eliminate what it touches, you can get a bomb that sticks to a marble and then explodes getting rid of anything around it, and there’s a more powerful rainbow bomb, which eliminates all marbles of the color it touches. Besides the special shots you get in combos, normal marbles in the chain transform to special ones that trigger effects that affect the whole chain when included in a match. There’s slow, that makes the chain advance at half the speed, stop that freezes the movement for a few seconds, and even rewind, that gets the whole chain back some distance. You can also get a fast laser shot, that gives you a special green sight so your aiming is more accurate and when you shoot the marble travels at very high speed. There are also obstacle marbles that get in your way, like the frozen ones, that you must shoot directly to break the ice, and then you can use it in a match. And some are “deep frozen” marbles that can take 2 or 3 shots. There are also sticky marbles that have slime on them, and to set them free you must make a match next to them. Finally there are stone marbles, which actually give you bonus points when you eliminate the colored marbles in front of them and then let it get to the end of the road. In some levels you have to free all the frozen, sticky or stone marbles and reach a certain score to win. At the beginning of each level you can also buy boosters that you can activate whenever you want. There’s the Tornado, that gets rid of 50% of the marbles in the chain on screen at the time. There’s a hammer that appears and hits 3 places of the chain at random, and another similar booster called triple shot, when you can actually aim fire balls to destroy the marbles they touch in their way. There’s also a Thunder that you aim, and it’s very wide, so it takes a huge section of the marble chain when you use it. Finally there’s a Slow Motion booster you can press so the chain advances at half the speed. It can be useful to plan your next shots.

Woka Woka features nice hand-drawn 2D artwork, but in a way that the balls have a 3D looking design, and the backgrounds, while very colorful, still have a realistic feeling to them. Like a detailed painting or maybe a touched up photograph. 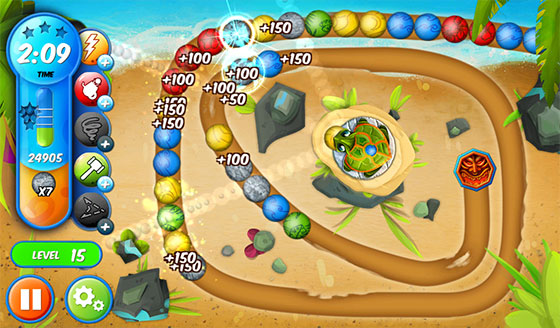 The turtle in the center only rotates, and shoots, but you can see how it gets the next marble ready when you take a shot. Special Marbles look quite nice, with explosions and flashing lights effects when you use them. Also the boosters that affect the whole screen like the tornado gathering half the marbles in the screen in the middle of a whirlwind look cool. In the levels, the same elements repeat themselves, but they’re arranged everytime for variety and a fresh look. Even if you’re always on a beach setting, stuff changes so it doesn’t get too repetitive.

The Marble Shooting genre isn’t as exploited as Puzzle Bobble clones or Match-3 games where you only switch squares to a side, but there are only a few great ones, and gameplay wise Woka Woka seems to try its best to get to that level of quality. 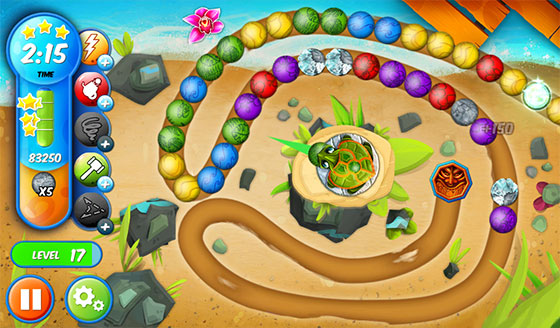 Special Marbles in chains that activate time effects, is something every game in the style has, but the frozen and sticky balls, are something commonly seen in bubble shooters and not in this genre, and in this game it works pretty good how they were implemented, and getting special marbles to shoot after a triple combo is also a very welcomed addition that keeps things fresh, and you may try to do longer combos to try out a new power up, and not so much for the score. The first 10 levels start slowly, but by the time you win the first boss level and get to the second section of the world map, you’ll realize how challenging it can be when mixing up all the different original elements Woka Woka has.

Woka Woka is free on Google Play, but there are in-app transactions to get golden coins (game’s currency) and 10 of them are worth a dollar. When you lose, you exchange 9 coins to continue, the marble chain goes back 50% of the road and you can keep playing. For almost a dollar, it may be a little too much for some people. But if you keep practicing, you won’t need to buy boosters or anything, and you get daily rewards just by logging in, and also items in treasure chest as you advance throught the world map.

Woka Woka is a great marble shooter that adds enough original elements to create a new experience for people that have enjoyed similar titles. IF you’re a casual puzzle fan, it’s a bit different, more fast paced and arcade like, can get pretty addictive and quite challenging, so if you’re curious about the genre, this is a great option to start with lots of power ups, boosters and special effects to discover. Pros Cons