Is the sky blue and the ground yellow? Or is the ground blue and the sky yellow? Hop Swap is a sidescroller adventure with a switching worlds mechanic that will challenge gamers looking for an original free mobile platformer.

Hop Swap is a sidescroller platformer where you collect diamonds and avoid monsters, with the ability of being able to switch from yellow upright world, to an upside down blue dimension. 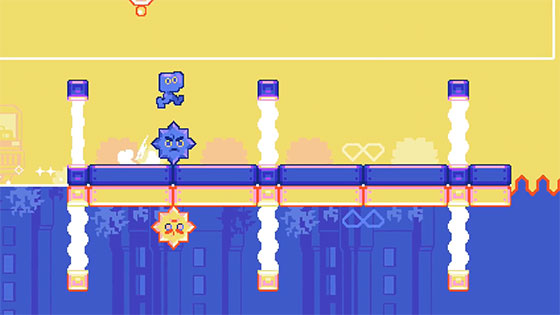 To move your character around, swipe your finger on the screen left and right to move around, up to jump, and when you’re walking on the edge of the worlds, swipe down to swap. While you walk automatically, you can change directions anytime you want by swipping in the opposite direction. You’re also able to swipe down while in mid-air to go down fast, and that way defeat enemies or swap worlds, but this way you’ll appear jumping very high in the other dimension, being able to get on hard to reach platforms. The objective of the game is just to go right until you reach a checkpoint, and then keep going until you reach the very end. When you reach a checkpoint, you can exchange diamonds to activate it and re-appear there when you lose. You can die from touching spikes on platforms, getting punched by baddies or being shot by a certain type of enemy that spits spike balls. As you advance, you’ll have to activate switches to open doors or to make appear invisible platforms and so be able to continue your way. You’ll also find trampolines to jump really high up and portals that will teleport you to different areas. When you die and go back to the checkpoint, you’ll notice that you still have the diamonds collected in your previous life, but you will have to activate the switches again.

Hop Swap features an old school pixel art that is Nitrome’s personal style, but everything has a shade of blue and yellow, and while the chracters are well animated and there are a few nice details in the backgrounds, the lack of color makes the game a little dull after a while. 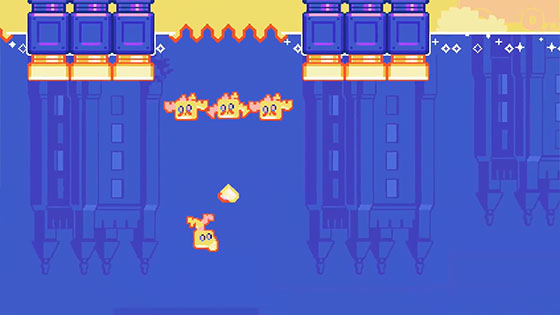 The are a few special effects with white color, like dust lifting from the ground when you jump, or sparks when you land on an enemy, and when it disappears it leaves a spirit with the shape of a skull. You can also see the diamonds shining and some platforms have special sparkling effects. You can also see that spikes have a red outline to stand out in the yellow world, and a purple edge in the blue world. The story is also told by cutscenes at the beginning, which it’s a nice touch, but while everything looks OK at the beginning, the same elements repeat themselves too much too soon, and nothing really catches your attention after a few minutes. Overall, it looks a little above average for a game of this kind, but it is not Nitrome’s best looking title.

Hop Swap is not like your common mobile platformer, you can move in all 4 directions and moving between worlds makes for a pretty original experience, and when you pass the tutorial levels, you’ll encounter some real challenge for seasoned gamers. 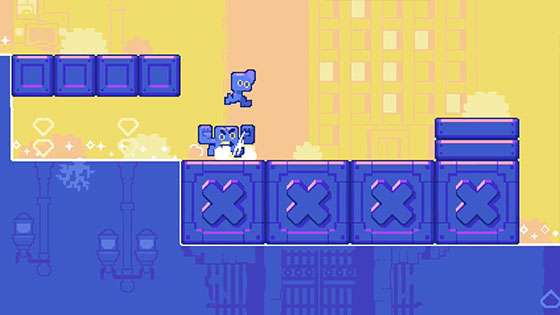 The concept of the game is good, but it may have worked better with separate levels instead of a really long one. It seems that the developers wanted to make the level too long to extend the playtime, but that made some sections feel like they were made as a filler, and not as a well planned challenge. The music is OK and there are some funny cartoony sound effects, but there aren’t any extra challenges or characters to unlock, which are commonly seen in other Nitrome games, which makes this one feel like it’s missing some features.

Hop Swap is free on Google Play and the Apple App Store. You’ll see a video ad after losing a few times, or when you want to activate a checkpoint and you don’t have enough diamonds. This can mess with your experience a little bit. The no-ads version is worth a couple of bucks, so consider it if you really want to enjoy the experience with no interruptions.

Hop Swap has an interesting gameplay mechanic, simple controls and feels different than most platformers out there, but the visuals and gameplay isn’t that good after a gaming session, and it just isn’t as addictive as other Nitrome games. Try it out for yourself if you’ve had too much infinite runners and are looking for an original platform adventure. Pros Cons